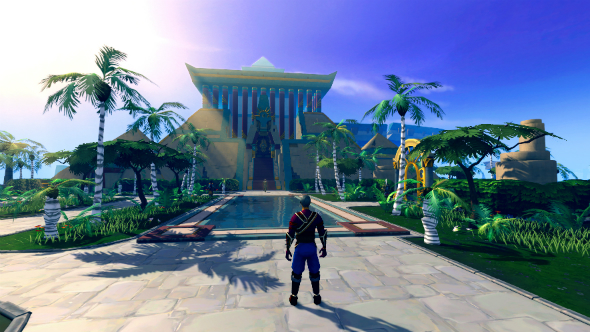 Runescape is so old now that it’s easier to talk about it in terms of eras than to treat it as one continuous entity. From the days of DeviousMUD to the launch of Old School Runescape, Runescape continues to grow and morph around minor and major updates alike. Menaphos, the latest expansion-style update to the MMO since 2014, marks the start of a new era for this beloved MMO, one of huge add-ons released every few months rather than piecemeal weekly updates.

For more skilling and loot, check out the best free MMORPGs.

But Menaphos is also a statement of intent from Jagex about what they want to create with Runescape. After the division between Runescape and Old School Runescape in 2013, the current game has floundered for its identity amid a whirling torrent of competitors that all claim to be offering something ‘unique’ to fans of the game.

Fans of Runescape know what they are getting from Old School Runescape with its simple – yet reliable – combat system. Fervent fans of PvP refuse to leave the 2007 version of Runescape behind no matter how much new content today’s Runescape has to offer. Menaphos is a confident and assured answer to the question of what Runescape brings to the table: characterful story, heaps of PvE content, and an unconventional approach to the MMORPG grind. Here’s why Menaphos is the most important update in the last four years of Runescape. 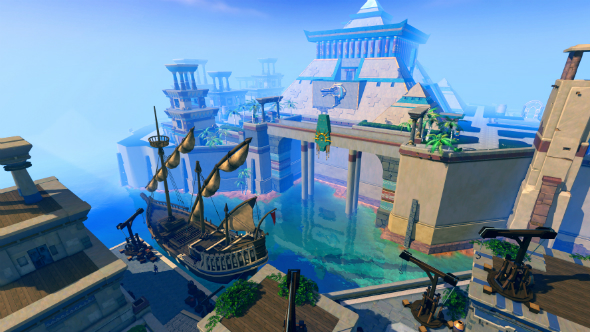 When Jagex released Prifddinas, The Lost City of the Elves, three years ago, it was one of the biggest content updates the game had ever received. Menaphos is even bigger. That’s not a facile comparison. Menaphos is a proper urban sprawl on par with Varrock: you can enter almost every building, have a distinct conversation with nearly every NPC, and explore a couple of secret locations further afield if you’ve experienced everything the Golden City has to offer. To call the expansion Menaphos is even doing it a minor injustice, as there are actually two cities to explore beyond the imposing walls – Menaphos and Sophanem, it’s anagrammed opposite.

While you’ll need to be a mid-level Runescape member to enter Menaphos, once inside you’ll find a remarkably open city, with only a couple of areas sealed off until you’re further into the expansion’s quest series. Below the city there’s a procedurally-generated skilling dungeon and an enormous Slayer dungeon, the former offering a new and limitless space for non-combat skill boosting, while the latter serves as a high-level Slayer dungeon with monsters starting at combat level 101.

Jagex estimate that it’ll take you a minimum of 40 hours to get through Menaphos. Of course, that depends on what level you are as you go into the expansion and how fully you want to explore beyond the four main quests and 21 level increase to the Slayer skill. This is an unparalleled amount of content for a single Runescape update, and Jagex’s intention to release another expansion of this size in September and December shows this isn’t a one-off gesture; it’s a new way of playing Runescape.

“It’s a massive change for us and our existing player base in terms of how we deliver content,” says lead designer David Osborne. “We’re used to drip-feeding good, additive pieces of content weekly, but this is about bringing all of that together to give players something they can really immerse themselves in – a long-form story, a lot of skilling and combat content, an expansion to a level cap – all the things you’d want or expect from an expansion.” 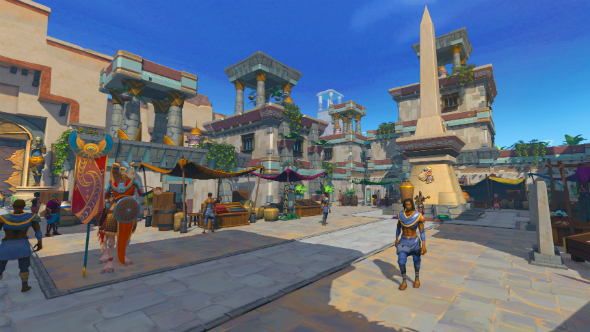 Jagex have paid careful attention to changing ways in which people consume content, the popularity of binge-watching Netflix series appears to have inspired the MMO’s switch from regular updates to sprawling expansions. “It’s us moving to the box set mentality,” explains product owner Joseph Redstall, “we did all these surveys last year and we talked about the cadence of updates and it was working fine for us. We could do sizeable chunks of content every two months, but we can’t do as much as this.”

Menaphos is also a chance to bring prospective players into the fold with a more packaged chunk of content. A new map, new quests, new loot, new systems, and an extended skill cap – all under a single release date. Menaphos is about creating a critical mass of stuff for existing, lapsed, and new players to gravitate towards, which could make the decision easier for those who are on the fence about whether or when to dive in. 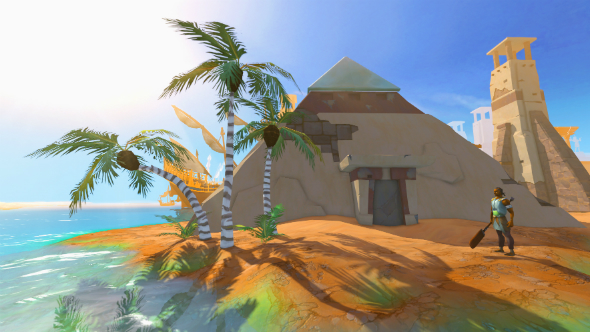 Jagex have stamped a peculiar niche onto Runescape’s grim fairy tale setting over the course of its 16 years. It’s a medieval fantasy realm that spans a huge number of cultures and environments, but it also drags in steampunk and modern-day influences. In large part, that’s because it’s a world that’s grown by way of hundreds of small content updates, most of which were alterations to existing locales.

Jagex rarely get to flex their artistic muscle with a blank space. What we knew of Menaphos was confined within the low-res stone walls at its borders – nothing else existed beyond the trollish gates, which players could walk up to, but not travel beyond. For the first time, Jagex was working with some of that empty space, creating content for the Menaphos update from scratch rather than building it on top of a town that already existed.

“We had this literal blank canvas,” says Redstall, “the city has to be there but at the moment it’s just sand. So we got to choose how it was going to look and that was a lot of fun during the pre-production phase.” The look and tone they settled on is certainly very Runescape, a blend of ancient Egyptian architecture and lush, cartoonish blobs of colour and life more reminiscent of modern-day Marrakesh. A glimpse of the key art tells you everything you need to know: you’re getting a desert area; you’re getting that Indiana Jones, matinee show vibe; you know there’s going to be exploration, adventure, romance, and political intrigue.

Visually, it’s one of the most striking settings in the game, a total breath of fresh air that’s distinct from even the major desert settings like Al Kharid, Nardah, and Pollnivneach.

It’s also one of the biggest updates since Jagex switched Runescape from a browser-based game to NXT, the downloadable client that launched in 2016. Menaphos is something of a reveal in terms of what’s possible with the new client: the Golden City is gorgeous. Volumetric lighting and new water effects lend Menaphos a utopian feel. The city is light and open, you feel the heat of the sun overhead, columns of light piercing through palm leaves. But this isn’t Al Kharid. The city streets are paved, houses and shops are brightly patterned and adorned with hanging plants, the water is blue and crystal-clear, offsetting the heat of the desert sun. As much as NXT has helped beautify existing game areas, it’s nothing compared to the splendour and opulence Jagex have managed to eke out of Menaphos. 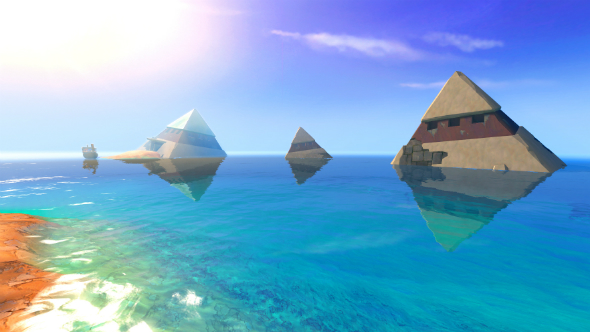 Since the advent of Old School Runescape, Runescape has increasingly focussed on delivering a single-player RPG experience towards rivalling those offered by Bioware or Bethesda, with an emphasis on questing and solo progression. Menaphos embraces that mentality wholeheartedly, with skilling built into every street and district in the city, as well the Shifting Tombs mini-game and Sophanem Slayer dungeon for non-combat and combat skilling respectively.

Outside of these areas, opportunities for boosting XP are scattered throughout the city itself. Thieves can train in the Merchant district, stealing from stalls and NPCs alike. The Worker district is home to level 50 mining opportunities. There’s a new type of tree for level 47 woodcutting in the Imperial district. Head over to the Port district and you’ll find three new types of fish to catch and cook: a level 50, 62, and 70. Finally, there’s a new Hunter animal at level 60 across the river in Sophanem.

The Shifting Tombs mini-game is the main focus of Menaphos. It’s a randomised area you can enter either alone or in a group. Before entering you select the type of non-combat XP you want to gain, and once inside, you have five minutes to complete as many activities as possible. Fail to find the exit and escape before the timer runs out and you’ll lose everything you gained inside. For the most part, Shifting Tombs asks you to run through a maze, clicking on objects to rack up as much XP as possible – there are some simple puzzles that net bigger rewards, if you’ve got the time to crack them of course. Sophanem Slayer dungeon, on the other hand, is an ideal spot for gaining combat skills, rising to the new Slayer level cap, and earning loot. 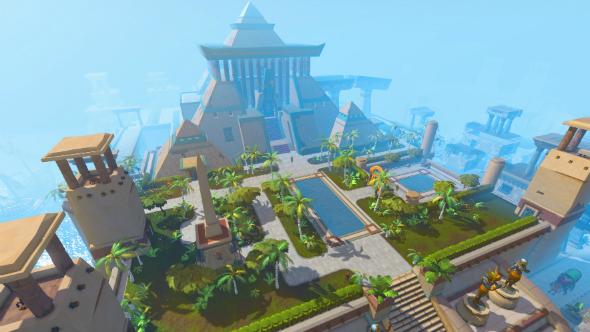 Menaphos isn’t just a good space for character progression though. Advancements in every type of skill while in the Golden City are essential to discovering more of its story. That’s because of a new Reputation system, which effectively encourages players to see more of the city by gating key events behind a factional and citywide Reputation system. Skilling is one of the many ways you can increase your Reputation with a given faction and the city overall. It means you can progress your character as you explore the city and advance through the main story. It’s an organic approach to tackling well over 40 hours of content that should cater to that various types of playstyles the game supports, from those that want to efficiently surge through the expansion’s highlights, to more casual players who want a more immersive experience.

Any one of those features would make Menaphos an important update for the Runescape community, but Menaphos is a comprehensive checklist of RPG goodness. It’s an expansion that respects and cherishes the grind, one that shows Jagex know its community and are listening to them. Above all else, it’s a sign that the 16-year-old MMORPG is rediscovering its identity. It’ll never be the same as the game millions played back in the mid-2000s, but there’s a lot to love about the direction Jagex are taking this treasured IP in.

Menaphos is live now and free to enter for Runescape members, although there are a couple of quests you’ll need to have finished before you can enter the Golden City.