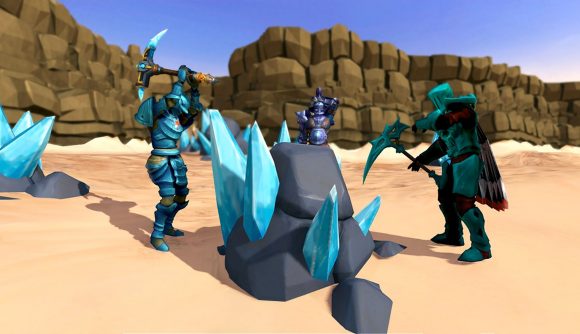 Two of RuneScape’s original skills – which have been available since the game launched – have finally been reworked. To mark the game’s 18th anniversary, Jagex has overhauled the mining and smithing skills, introducing four new tiers of armour and weaponry.

According to an explanation on RuneScape’s website, Smithing will now take longer, increasing their value, but you’ll get more XP for whatever you create. Smithed items can now be upgraded, offering faster rewards and making them more valuable in combat. Once you’ve upgraded an item to its fullest extent, you can take it to Falador, where the dwarves will bury it, giving you even more XP than before.

When it comes to mining, the update offers plenty to high-level players. Previously, you needed level 85 smithing to make use of rune armour, which you could wield at combat level 50. To redress that imbalance, rune armour can now be smithed at level 50, and four new metals will make up armour that you can smith at levels 60, 70, 80, and 90.

If you’re heading to a quarry, you’ll need a pickaxe that’s at least as high a level as the rock you’re mining – so a level 30 rock needs a level 30 pickaxe, and so on. When you start mining you’ll see that each swing gives you XP, and fills up a progress bar. Once full, that bar gives you an ore. The higher your level and better your pickaxe, the faster the bar fills and the more ore you get.

Read more: RuneScape just had its best month in a decade

The update also caters to those of you who like to play on a second screen. Rocks don’t deplete any more, making it easier to share, but also to mine while completely AFK. XP and ore rates are better if you’re actually playing, but if all you need is to grind out some levels, the new update should cater to you pretty nicely. To maximise how much you can get out of all that mining downtime, there’s also a brand-new ore box, letting you store up to 100 of every ore up to the level you’ve upgraded it to, potentially allowing for an inventory of several thousand ore. The skills rework is live now, so jump in and take a look at all the new features yourself.