Rust has, in one form or another, been available since December 2013. Amazingly, it hasn’t had a paid expansion in all that time – but that’s about to change with the upcoming launch of its first premium DLC, the Instruments Pack.

As the name might suggest, the expansion contains a bunch of musical instruments, including the wheelbarrow piano, |the junkyard drum kit, the xylobones, and more. A new control scheme will be included in an accompanying update to make instruments easier to control, developer Facepunch says. You can also plug in MIDI keyboards and other compatible devices to play the instruments in real time along with your in-game character.

The Instruments Pack launches for Rust on PC on December 5. Including a launch discount, the expansion will cost $10, but a regular price (and international pricing) has yet to be revealed. You can, however, play the instruments for free on Rust’s testing branch from now until the DLC’s final release.

Facepunch says it had the whole community in mind when developing this expansion – in particular it says it didn’t want to split the game’s playerbase in any way. “When looking at the way other games have handled DLC, we noticed the tendency it has to fracture and split the community,” it states. “This is something we wanted to avoid. Owning this DLC should make the game better for you and everyone else playing with you. 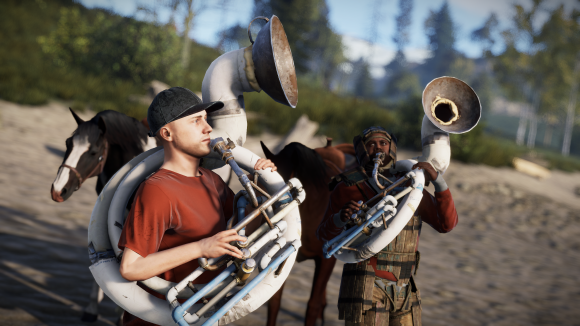 “The ability to play the instruments isn’t restricted to DLC owners. If your friend crafts a guitar for you or you take a tuba from a rotting corpse – you’ll be able to do everything a DLC owner can. We’ve updated the original acoustic guitar to the new music control system which will be available to everyone.”

It was also revealed just recently that Rust is coming to PS4 and Xbox One soon. For now, however, the PC version remains the only way to play the popular survival game. For more, check out our in-depth interview with Welyn, the Robin Hood of Rust.