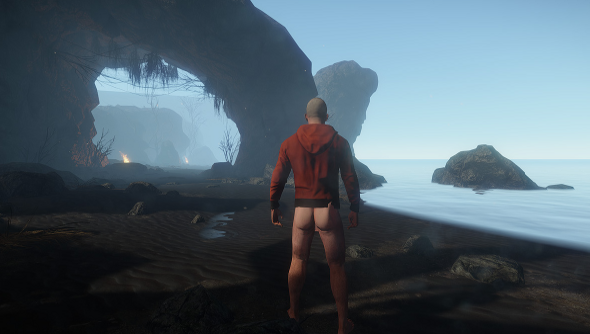 Another update hit Rust’s experimental branch at the start of the weekend. The new HTML UI is just getting some final touches, models are starting to look and move more like humans and less like monstrous automatons with skin grafts and new biomes, caves and tools have made their way in.

None of that holds a candle to the ability to rob and dress-up other players.

You can go up to a sleeping player, now, rob them blind and then, in a final act of humiliation, dress them in a costume of your choosing. Or just steal all of their clothes. But a bug has spread this feature further than intended.

“There’s an interesting bug right now that I have left in to see how it plays out. You can actually loot alive, awake players if you stand close enough to them,” Garry explains on the Rust blog. “This seems like something that should be possible, but it’s a bit overpowered right now. You can literally take the rock out of the other player’s hand before they kill you if you’re fast enough. I’m leaving it in to see if it causes any significant issues, or whether it offers more emergent gameplay.. my gut feeling is that we’ll have to nerf it a bit, say, add a progress bar to looting stuff – so the other player has a chance to realise what’s going on.”

Garry says that it was a week of progress, and that the game’s foundation is getting close to the point where a lot more new content can be added a server hosting can begin.

The default branch of Rust won’t be affected by any of these changes, as it’s no longer being updated. The experimental version is where all the action is at, but it’s in flux; a testing ground for rebooted and brand new content. Maybe not the best place for enjoying the game, but it’s certainly where you’ll see the path that Facepunch is going down. It’s strikingly different.