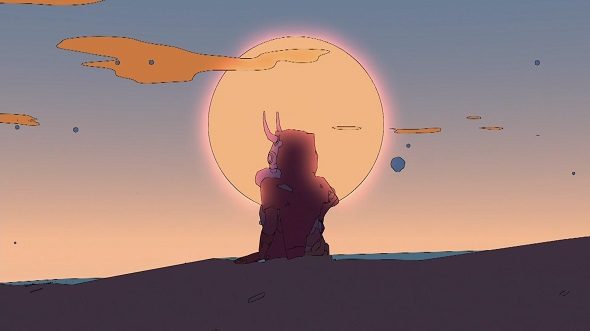 You might have seen Sable on  #ScreenshotSaturday, but it’s just gotten a world premiere during the E3 2018 PC Gaming Show. Sable’s art style looks equal parts cel-shaded and Studio Ghibli – not too much is known about the gameplay other than that it revolves around exploring an ancient world of ruins. Oh, and it’s so, so, so pretty.

Here’s Sable’s official description: “Sable is a coming-of-age tale of discovery through exploration across a strikingly rendered open world desert. Go on a deeply personal journey across an alien planet as the young Sable, exploring ancient monuments, ruined architecture, and ships fallen from the cosmos, all while learning the history of its inhabitants and discovering her place in the world.”

“What is the history behind these broken monuments scattered about the land? How did the nomadic tribes come here, and what made them stay? What’s the greater importance that Sable must come to understand as part of this rite of passage? Only the inquisitive mind will come to understand the lessons held within the sandy confines of the planet’s secrets: lessons of life, family, and being a part of something greater than one’s self.”

Sable is due to release in 2019, which is very vague. The game is being made my a tiny studio though, which is astonishing given its apparent scope and explains the cagey release date.