As I dodged a superpowered furry’s second attempt to throw a car at my face with the power of his mind, I had to think long and hard about the many atrocious ways I could end his life. Will I shoot a ray gun at his head, expanding it to ten times its size, until it explodes? Will I freeze him with an icy blast and shatter him into a thousand tiny pieces? Nah, I thought, as I leaped into a helicopter, flew higher than the tallest skyscraper and then jumped out. I’m going to annihilate several blocks of the city with my fist. I land, a nuclear blast engulfs the city, and when the dust settles, I’m the only one left alive.

Saints Row IV is absurd. Of course it is – it’s a Saints Row game. Unlike its predecessor, this fourth outing sees the Saints abandon the world of gang warfare and energy drink sponsorship, to be superheroes intent on saving humanity from a megalomaniacal alien emperor and his unrelenting horde of hideous chums: the Zin. Most superheroes don’t look like Evel Knievel crossed with an eagle, though.

And it’s bloody amazing. It’s one of the most hilarious, entertaining open-world action games I’ve had the good fortune to play. It’s even made me stop hating dubstep with every fibre of my being. Almost. Wub wub. 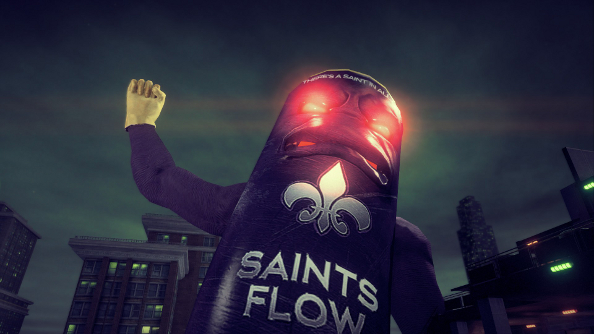 The Saints have restored their “good” reputation, saved America from a terrorist attack and now run the entire country from the White House. The Boss has gone from a street thug to President, which is quite the achievement for someone who started out mute. An election is looming, and a second term is up in the air, but the Saints don’t have time to go on the campaign trail, as a huge alien invasion fleet appears in the skies above Washington D.C. and kidnaps everyone worth kidnapping. And a few almost certainly not.

Trapped in a Zin-made simulation of Steelport, the Boss has an army of ugly aliens to contend with, a gang to rescue and the fate of the human race hangs in the balance – it’s a far cry from the gang wars of the previous installments. With this shift to a science-fiction setting, Volition has gone all-out, peppering Saints Row IV with references to They Live, The Matrix and countless superhero comics; unrepentantly appropriating and parodying a mountain of pop culture to elicit a constant stream of laughter.

Comedy doesn’t exactly have a good track record in games, certainly not outside of adventure games, but Saints Row deftly throws out witty one-liners, brilliant visual gags and even the occasional self-deprecating jab, which in more than one instance made me wish I was playing with an audience and not cackling away all by myself. 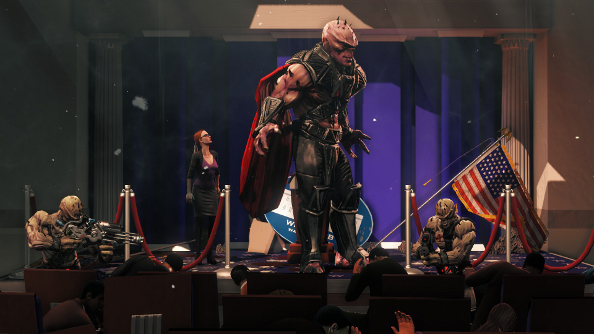 The whole ride is a spectacle from start to finish. The digital city of Steelport is a mix of the original environment from the Saints Row the Third and a glitching facsimile, with citizens freaking out and mutating near rifts, walls shifting and the districts subtly changing as the Boss exerts his or her control over an area. Standing beside the mundane skyscrapers and warehouses are towering alien structures, advanced Zin technology and above it all floats a vast red fortress reminding everyone who is in charge.

With the rules of the real world thrown out the window, the absurdity inherent in the franchise has been turned up to 11. I can safely say that I’ve never had so much fun with a game’s arsenal. Dubstep guns launch neon, explosive wubs at foes while laying down some beats; alien rifles inflate enemies until they explode, slaying those standing next to them; black holes can be summoned with the help of the singularity gun, swallowing up people, aliens, vehicles and whatever else is unfortunate enough to be nearby. I don’t think I’ll be able to go back to games that are content with guns that just fire bullets.

Wacky weapons are far from the only tool available to the Saints, however. With clear nods to The Matrix, the Boss – and eventually the whole crew – gain incredible powers by hacking the system, turning Zin programming against its creators. Super speed, super jumping, gliding, telekinesis, super strength, there’s a bevy of abilities waiting to be unlocked by completing missions and killing alien monstrosities. 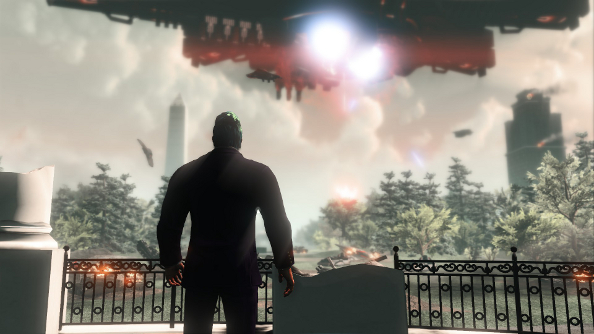 While these powers are doled out at key moments during the story, there are frequent opportunities to upgrade them by discovering bits of floating code distributed throughout Steelport. Doing optional side missions for the rescued crew further augments them – often with new “elements”, expanding the blast power into ice, fire and mind control variants, for example. My personal favourite: the shrink element that can be added to the stomp attack. Enemies are so much easier to kill when they are two inches tall.

Not merely novel methods of destruction, the heroic abilities flow into every aspect of Saints Row. No longer must players travel like plebs in simple cars or motorbikes, not when one can leap off the ground like The Hulk and then glide between massive towers while UFOs give chase. Likewise, the mini-games – which are abundant – often rely or are enhanced by the powers. The classic insurance fraud game is made all the more ludicrous when one can run like The Flash into oncoming traffic, and Professor Genki returns with his unique brand of violent entertainment, tasking players to launch cars, people and animal heads into the air with telekinesis.

The consistency and interconnectedness extends to the entire game, resulting in a cohesiveness that Saints Row the Third sorely lacked. Most missions result in meaningful progression, like freeing allies, and even when they are less story-driven, they still end up offering rewards that further the Saints’ single goal: namely the defeat of the Zin. There are also a huge number of throwbacks to the previous games, from returning characters, to the acknowledgement that Shaundi transformed into a completely different person between the second and third outings – something that always baffled me. 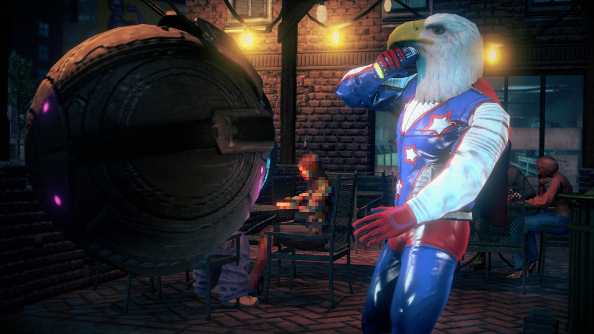 Pacing, which the series has always struggled with, really helps tie everything together like a good rug. Even while gliding through the city, snatching the vast number of collectables, or embarking on one of the many varied mini-games, there’s always this sense that a war is being fought: everything that you do weakens the Zin and you’re not simply messing about between progressing the narrative.

Blowing up traffic with giant balls controlled by your mind or participating in Tron-themed races might not seem like they would have a tangible impact on a war against alien oppressors, but each victory and each zany escapade breaks the rules of the simulation or spreads viruses throughout the system, stealing areas back from the Zin. Captured areas are bathed in a blue glow instead of the red of the Zin controlled areas, and glitches appear with greater frequency, emphasising the fact that the Saints are slowly destabilizing the prison.

It is the primary story missions that really impress, however. A plethora of twists and turns offer frequent surprises, and the existence of other simulations – the personal hells of each of the Saints crewmembers – creates opportunities for the Boss to briefly vacation in new, bizarre locations, from a Metal Gear Solid inspired spy mission in an underground bunker to a horrible 1950’s suburban utopia.

Fresh environments, climactic boss battles and a handful of mechanics unique to the virtual hells, like stealth, breath extra life into the game while treating players to tighter, linear sections. The change in pace and setting allows Volition to experiment, weaving in scenarios that wouldn’t work as well in Steelport but fit perfectly into the smaller prisons that the Boss’ cohorts find themselves in. 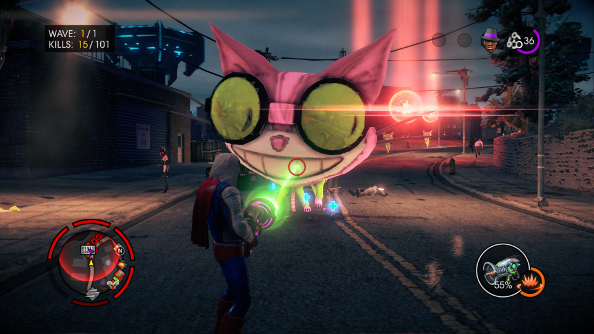 The sheer, unrestrained variety of the content ensures that boredom becomes an alien concept. Steelport’s map is so densely packed with icons representing potential shenanigans that it’s hard to see the streets, and simply jumping into the game for a single mission will invariably end several hours later after encountering numerous new and completely ridiculous activities that demand to be played.

And what better way to enjoy plummeting from great heights, causing a nuclear explosion to erupt after you land, or flinging cars at unsuspecting police officers than with your homies? The Saints crew are a source of constant amusement, churning out spot-on gags and perfectly delivered dialogue, and what other game would have Keith Richards playing himself in the role of the Vice President? The voice options for the Boss all put on a great show (especially the much beloved Cockney voice), too, especially when singing in the car – but it is J.B. Blanc as the voice of Zinyak, leader of the Zin, who shines the most.

Camp, prone to maniacal monologues, delightfully evil – scenery chewing Zinyak is undoubtedly the greatest antagonist in the series. One moment he’s adding a bit of gravitas to the proceedings, and the next he’s ruining a song on the radio by singing along. It’s as if Lex Luthor and the Joker had a hideous, alien baby. 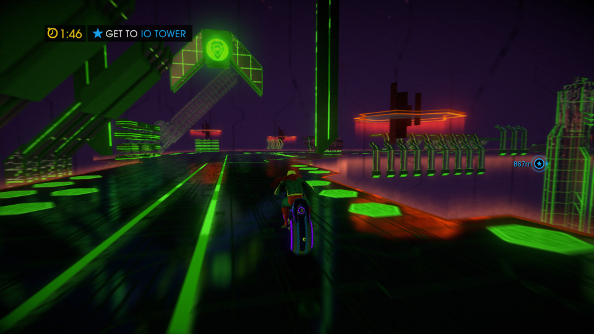 Beyond the dialogue, the audio is consistently top notch. Yeah, there’s a ton of dubstep, but that’s completely forgivable thanks to the inclusion of classics from the likes of Aerosmith and Thin Lizzy. With superpowers negating the need for traditional transport, the radio has been expanded to be played while on foot — which was a thoughtful and very welcome touch. As grand as the radio options are, it’s when Volition directs the music that it really peaks. Characters occasionally select their own tunes to sing along to, and most of the dramatic set pieces use the audio expertly. In the lewd vernacular of the game, it’s an awesome ear orgy.

As wonderful as Saints Row IV is, I wish I could have my cake and eat it too. The new heroic guise of the Saints works surprisingly well, but I’ll never stop missing playing the psychopathic villain, and while Zinyak is going straight to the top of the list of dictators I aspire to be (it’s a short list, granted) the Zin themselves are a bit boring, lacking the charisma of luchadore gangsters or the Yakuza inspired Ronin. Likewise, while building up a gang and an illegal infrastructure wouldn’t make as much sense in the context of the fourth installment, they were great features that I sorely miss.

To say that I’m perfectly happy to settle for the new direction would be an understatement, however. It is only with hindsight that I realise I miss the older elements, as I was far too busy gleefully flitting about Steelport, getting into all sorts of trouble, to really notice their absence. At a time when I’m starting to tire of open-world action games, Saints Row IV slaps me across the face with a tentacle sword and tells me to stop being so po-faced. And I like it.