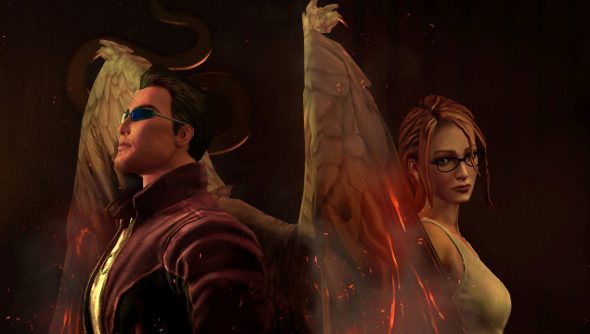 Saints Row: Gat Out of Hell, the expandalone that pits Saints Johnny and Kinzie against the legions of hell, is almost upon us, and Deep Silver’s offering players the chance to summon their own demonic spirits and ghouls if they pre-order Gat out of Hell from UK retailer, GAME.

The Saints Row “Wee-Ja” board will let you get in touch with the other side, apparently, so you can ask the dead and damned all important questions like “Where are my car keys?” and “what is that smell?” or you can just send them colourful insults. By dabbling in the dark arts, you might even win something.

By sending photos of you playing with your “Wee-Ja” board to [email protected], you’ll be entered into a competition where you could win an evening spent ghosthunting with spirit medium, Derek Acorah.

Pre-ordering the game also nets you free DLC in the form of the Plague of Frogs DLC pack, which will let you weaponise amphibians.

If you’re yet to play Saints Row IV, Saints Row The Third or Saints Row 2, then you’re in luck, because the Humble Store is running a franchise sale all weekend, which includes DLC, season passes and special editions for up to 75 percent off.