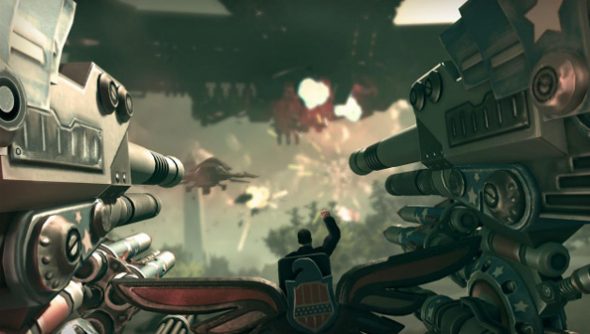 That was Saints Row design director Scott Phillips, talking to colleagues in the wake of Saints Row 3. Frankly, I hadn’t imagined the new sequel was a giant mental stretch for Volition. I don’t say that to be snide – but the superpowers, alien overlords and giant Michelin men of Saints Row 4 are simply more fruits from the fertile ground the studio have been furrowing in Rockstar’s stead for years now.

For a potential Saints Row 5, however, Volition will be farming a different field. Said Phillips in a recent interview: “We’re definitely considering Saints Row IV sort of the end of that saga of this character and the Saints as they are.”

When staff returned from a studio-wide holiday after the release of Saints Row 3, the path its sequel would take became suddenly clear.

“Very quickly we came up with: ‘Well we’ve got to have… let’s do superpowers.’”, Phillips told GameReactor. “It’s something we’ve always been talking about. Wouldn’t it be great to run as fast as a car, or jump over a building, or be able to pick up somebody with your mind and throw them across the city.”

“Things started snowballing from there,” he went on. “You know, fighting aliens came out of that because we needed an enemy that properly fights you, and then being the President felt like the next logical step from being a celebrity. So it all sort of came together. We definitely have a mentality of like, ‘Alright, we did that last time. We’ve got to that, plus one. We’ve got to do better than that this time.’”

But Phillips already knows that +1 won’t be enough for the next Saints game.

“We’re definitely considering Saints Row IV sort of the end of that saga of this character and the Saints as they are,” he mused. “So if there’s any more future Saints Rows – which you know we always hope there will be, we hope there’s fans for future games like that – they will probably continue in a different direction.”