Samsung’s CJ89 is a little bit ridiculous. This 49-inch display is essentially two 1080p monitors glued together seamlessly so that it takes up almost all of your periphery. With a 144Hz refresh rate, this expansive monitor isn’t sluggish, either. But can you ditch the gaming branding for a business model and still get Grade-A gaming performance?

That’s a necessary question to ask, because the Samsung CJ89 isn’t actually a gaming model – that’s the CHG90 – but it’s a damn sight cheaper at £899. Samsung has stripped out all the AMD Freesync tech and HDR capability that the higher spec, yet older, gaming monitor features.

Won’t settle for less than 4K? Here are the best 4K monitors around.

It’s actually a pretty good tradeoff, as you still get that 144Hz refresh rate, ridiculous aspect ratio, and 5ms response time. Only 25% of gamers actually use AMD graphics cards, anyways.

The CJ89 is built for businesses, but as far as personal productivity in the office goes, I’ve found it lacking compared to a traditional dual monitor setup. Sure, the bezel-less, uninterrupted screen space is lovely, and if you partake in any video / photo editing work it’s a dream (although the lack of IPS panel may not be to your liking).

But while a dual monitor setup allows me to ‘snap’ four web pages across my entire screen real estate, the C49J89 limits me to just two full-width pages, and I found it endlessly frustrating.

That may seem pretty minor in the grand scheme of things, but this small knock-on effect of a single panel changed my entire workflow during everyday tasks. I suppose I could get two Samsung C49J89 monitors side-by-side, but then I’m back to bezels. Unless… 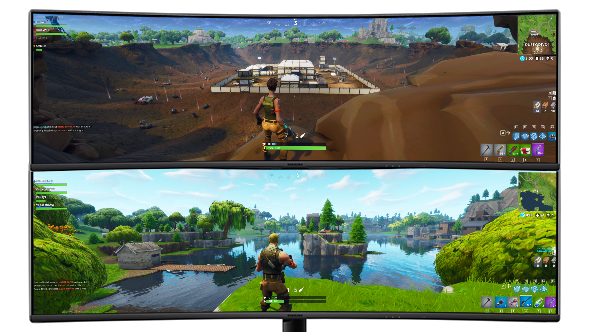 Eureka! Vertical stacking is the answer. Two of these monitors, at £899 a pop, and I’m back to four apps at once. Worth it? Sure, so long as I can put it on the company expenses….

Regardless, the C49J89 still has plenty of utility for a variety of tasks, not to mention incredible immersive properties for gamers. Overwatch is my go-to game in the office but it sadly doesn’t support the ludicrous 32:9 aspect ratio of the C49J89. Still, there’s a ton of titles that make the most of the Samsung’s 3840 x 1080 resolution.

One such game is Ubisoft’s Far Cry 5, which allows for the full breadth of the monitor to be occupied by deep south shoot ‘em up chaos. The C49J89 features a slight curvature, at only 1800R, and that allows it to completely occupy your vision – horizontally anyways. As a result, wingsuiting out of helicopters and sniping enemies from a distance instills a feeling of incredible depth of environment and locale that is otherwise muted by more reasonable aspect ratios.

But seeing as nearly all – insert today’s astronomic number of gamers here – of you are playing Fortnite, you’ll be glad to know Epic’s battle royale title supports the weird and wonderful 32:9 aspect ratio. I’m not particularly well-versed in the ways of winning a Fortnite battle royale, but the wide aspect ratio could be a seriously dangerous weapon in the hands of someone a little more talented than I.

Opponents diving into the map clustered together are easily spotted across the C49J89’s panel, and the breadth of real estate adds a little more competitive edge when you’re searching across the horizon for combatants. While the nitty gritty of up-close and personal combat is still largely down to player skill – not that I lack an abundance of that, of course – the ultrawide aspect gives you more chance of being forewarned of encroaching opponents sneaking up on you.

While Fortnite’s not all that demanding on your system, ultra-grade gaming on an ultrawide at 144Hz is no easy task for any GPU. However, a GTX 1080 Ti isn’t necessarily vital for decent frame rates. Overall, the ultrawide resolution of the C49J89 adds up to roughly 4.1 million pixels in total, while 1440p is somewhere around 3.7 million pixels. That means any of the best 1440p graphics cards will suffice for smooth operation. Plus, without the FreeSync tech, you aren’t limited to a single GPU manufacturer – there’s always a silver lining.

As for panel performance and tech specs, it manages a typical contrast ratio of 3000:1, and a brightness rating of 300 nits. While contrast is solid, the black levels aren’t anything to write home about and dark greys are a little tough to discern at times. White saturation doesn’t suffer the same fate, however, and viewing angles are very good to somewhat make up for it. The slight curve is not detrimental to the viewing experience even in the far reaches of this ludicrous panel, and that still applies even if you don’t sit perfectly squared up with the centre of the screen. 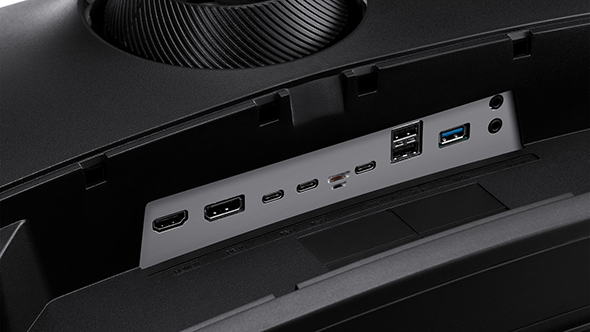 There are two HDMI 2.0 ports, and a single DisplayPort 1.2, but seeing as business monitors hold a little more esteem in connectivity than their gamer counterparts, you also get a healthy dose of USB connectivity in the back. There are two USB Type-C ports, two USB 2.0 ports, and a single USB 3.0 port. Those USB Type-C ports could always double up for display connections, which may be pretty handy for a streamer running their stream from another system or device.

So is the Samsung C49J89 a worthy substitute for the gamer-spec CHG90 on a lower budget? Absolutely. HDR and FreeSync 2 are great, but they’re the newest of the new for premium features, and, frankly, Windows HDR isn’t quite up to spec to make it a must-have feature just yet. You can forget the business brief with the C49J89; it’s as worthy of gamer credentials as its pricier sibling. Whether intended for productivity or not, that ultrawide 32:9 aspect is built for gaming on. 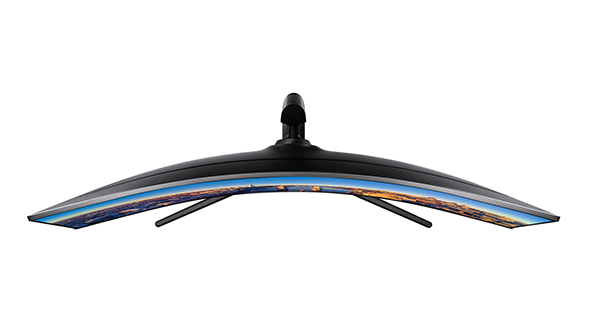 There are few things you can do with your PC setup to gain an advantage in gaming without breaking the rules. High-end audio, mechanical switches, and accurate mouse sensors all belong in that category, even high refresh rate monitors in general, but if the £849 Samsung C49J89 proves anything, it’s that extremely ultrawide monitors need to be added to that list.