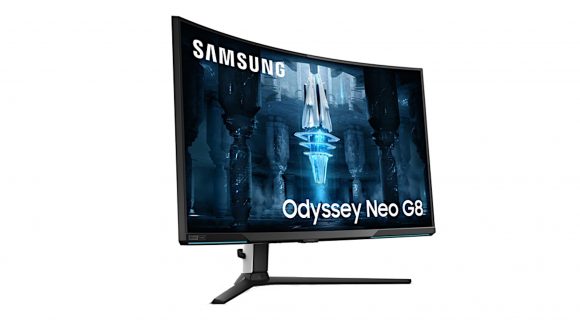 4K gaming monitors have been around for a while now, but they’ve not been able to offer the same sky-high refresh rates as other lower resolution offerings. As a result, players previously had to choose whether to prioritise image quality or opt for a more responsive experience when buying a new display. However, Samsung hopes to marry the best of both worlds and has recently announced its plans to make the first 4K 240Hz gaming monitor: the Odyssey Neo G8.

The Samsung Odyssey Neo G8 comes with all the top of the line specifications you’d expect from the best gaming monitors, in addition to some other creature comforts. The G8 will feature a single DisplayPort 1.4 and two HDMI 2.1 inputs, the latter of which will be your means of unlocking the monitor’s 4K 240Hz potential. It should be noted, however, that you’ll also need a GPU with HDMI 2.1 ports, such as Nvidia’s RTX 3000 graphics cards.

As well as being both sharp and responsive, the G8 boasts a 32-inch Quantum Mini LED panel bolstered by a Quantum HDR 2000 certification, which means it should offer great contrast, deep black levels, and generally fantastic image quality.

Much like Philips Ambilight displays, the G8 comes with CoreSync functionality that will attempt to match the colour of the monitor’s rear RGB LED strip with the on-screen action in real-time. It also comes with Auto Source Switch+, which automatically swaps the source to the most recent device you’ve turned on, which should hopefully make things more convenient if you have multiple devices plugged into it.

We don’t yet know when the G8 will release or how much it will cost, but Samsung has said that it expects to launch its new gaming monitor in the first half of 2022. While it’s unfortunate that we won’t be able to get our hands on it for a while, this does leave ample time for you to save up for one of the best graphics cards on the market to make the most out of Samsung’s new display.