Samsung are rocking Seoul with their SSD Global Summit and have just taken the wraps off both their new SSD 960 EVO and 960 Pro drives. They’re the fastest consumer SSDs Samsung have ever produced, capable of sequential read speeds of 3.2GB/s and 3.5GB/s respectively. That’s damned quick.

Want more speed from your graphics card and processor? Check out our guide to easy overclocking.

We first mentioned these two new drives last week, potentially as an evolution of their existing, OEM-onlly, PM961 and SM961 SSDs. But the consumer versions have turned up sporting even more impressive specifications. The original PM961 is rated at 3,000MB/s and 1,150MB/s for sequential read/write speeds, but the equivalent SSD 960 EVO is capable of speeds of 3,200MB/s and 1,900MB/s respectively.

That’s a pretty hefty boost, and potentially down to the use of the new Samsung Intelligent Turbowrite feature which is designed to boost those sequential read/write numbers. If it follows Samsung’s original Turbowrite technology the SSD will simulate higher performance memory on a small portion of its total capacity. That does mean that it might not be able to hit its peak performance with very large file transfers or with incompressible data, such as video files. But we’re still waiting on full details of the new feature.

To be able to hit such speeds though both the 960 Pro and 960 EVO are PCIe-based drives using the M.2 form factor. That allows them to use four lanes of PCIe 3.0 connectivity, allowing for a large amount of potential bandwidth for them to play with. 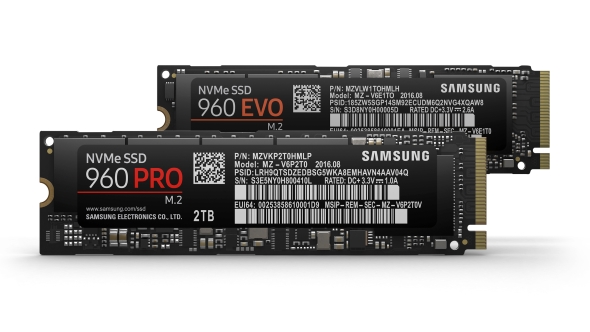 So start saving up if you want some seriuously quick SSD storage for your rig. After all, I’m betting Battlefield 1’s load times are going to benefit from a decent SSD…

Samsung are set to unveil their new range of consumer SSDs at the annual SSD Global Summit in Seoul in the coming weeks and Guru3D reports that their 960 EVO will be based on the Samsung PM961 drive they’ve been providing to system builders.

That would make the 960 EVO the first consumer-focused drives to use Samsung’s new Polaris memory controller and their new 48-layer triple level cell (TLC) V-NAND memory. The 960 EVO drives will be designed for the PCIe 3.0 M.2 connection on your motherboard, sporting the NVMe protocol, to deliver serious levels of storage performance. If they do match the existing PM961 drive’s specs then we’ll be looking at sequential read speeds of up to 3,000MB/s and writes of up to 1,150MB/s. 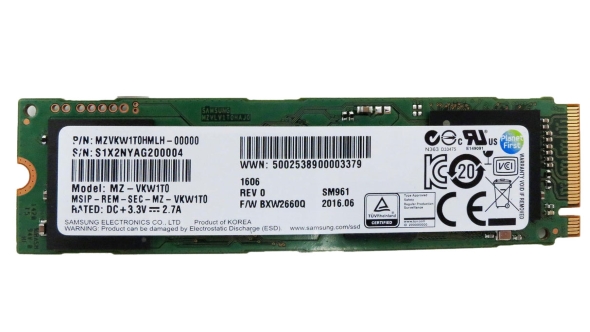 The more advanced Samsung 960 Pro line will still be using the Polaris memory controller, but will be rocking the latest 48-layer V-NAND in multi-level cell (MLC) trim instead, much like the existing SM961 OEM drive. That should offer the Pro series drives greater levels of endurance as well as potentially higher performance too, especially when it comes to write speeds.

We don’t yet know if Samsung plan to release both the 960 EVO and 960 Pro range in PCIe add-in board flavours as well as M.2 though, or whether they will be leaving the higher-priced Pro series to be used as drop-in cards.

Whatever the form factor though, Samsung are set to be producing some speedy, affordable PCIe SSDs in 128GB, 256GB, 512GB and 1TB trim and we should see the first drives on the shelves some time in October.

We also don’t know about the likelihood of any new Samsung SATA SSDs. With the existing 850 series already practically saturating the SATA interface is there really much more that anyone can do with the aging storage connection? We’ll find out more in the coming weeks.