Samsung is pushing for Microsoft to enable ultrawide monitor support on Xbox, a company representative tells PCGamesN. In an effort to expand its gaming monitor customer base beyond PC gaming and into the console market, Samsung is reportedly in discussion with Microsoft’s Xbox console team to enable the latest in ultrawide aspect ratios on console.

Ultrawide aspect ratios are swiftly becoming more desirable in PC gaming circles, with 21:9 and 32:9 gaming monitors rising in popularity alongside a greater shift to 1440p and 4K resolutions. Essentially offering the real estate of two monitors seamlessly glued together, even enterprise users are making the move. If I had any choice in the matter I’d still be working on the Samsung C49RG90.

There’s one caveat to ultrawide gaming monitors for cross-platform gaming, however, and that’s lack of console support. While many multi-platform games offer ultrawide resolutions on PC – and the PC ultrawide game list is quite extensive nowadays – neither the Xbox One or PlayStation 4 offer system support beyond 16:9. It’s possible to play on an ultrawide monitor, of course. You’ll just have to settle for black bars or, god forbid, a distorted output stretched out like Mike Teavee. 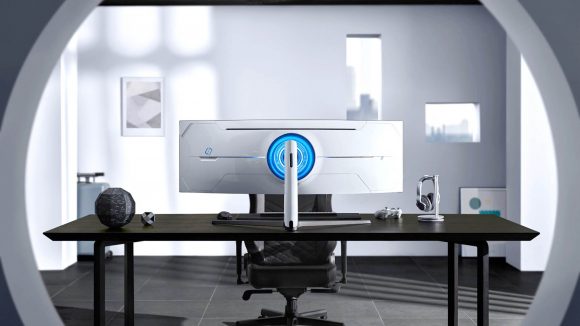 Samsung also tells us that it’s worked with Microsoft in the past to implement ultrawide gaming on an ad hoc basis. However, the functionality has never seen the light of day in a public release.

Ultrawide support may come too late in the day for the Xbox One, but with the Xbox Series X set to launch later this year, it could be yet another feature familiar to PC gamers that’s on the roster for next-gen consoles.

With the Xbox Series X reportedly set to favour frame rate over resolution (via Stevivor), there’s an even greater likelihood that resolute console gamers will be buying up the best gaming monitors once destined for PCs in order to deliver favourable frame rates. That’s the market Samsung would ideally like to be positioned to capitalise on when the time comes.

There’s also the question of developer support. Ultrawide aspect ratios may come naturally to some cross-platform titles, the next-gen consoles are essentially gaming PCs powered by AMD Zen 2 and RDNA parts. However, not all PC games support tremendously wide resolutions, nor will all developers be willing to carve out the time to implement this for, what will likely remain for some time, a small audience.

Nevertheless, with the potential for uncapped fps and greater gaming monitor adoption, the next-generation of consoles will likely bear witness in a drastic change in the console/TV state of play as it currently stands – and an even more pronounced shift towards the PC gaming experience.