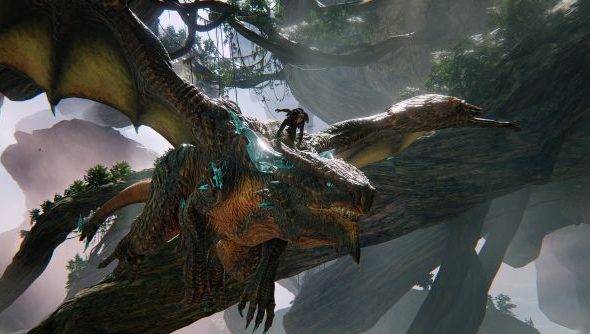 Update January 12, 2017: Xbox boss Phil Spencer has been replying to fans on Twitter about the cancellation of Scalebound, as concerns mount about the future of Xbox (and PC) exclusives.

The mood has been sour in the world of Xbox since the cancellation of Scalebound, an ambitious RPG project from Platinum Games. With the remaining lineup of announced exclusives sat side-by-side with Sony’s, it’s easy to see why – Xbox is looking mighty thin by comparison.

There are also concerns about the direction of Microsoft first-party titles, with many of them seemingly focusing on multiplayer. When Scalebound was initially announced, it was as a single-player game. When we saw it again, suddenly it was co-op, and this has people wondering if that feature was pushed by Microsoft, and if this is what ultimately held up development and lead to the game’s cancellation.

Of course, this is all speculation, but that’s all we have to go on. No doubt this frenzied conjecture is what prompted Spencer to address some of the comments he was receiving.

In on tweet, he replied to a fan, saying, “I know we have to take risks, I realise right now probably sounds hollow.” Another tweet followed: “It hurt me as well and to the community I apologise. I want everything we start to turn out great, to take risks, create diversity.”

Finally, he also stated that he knows the importance of first-party games. “I won’t abandon signing independent studio projects but I agree first-party internal studios are critical,” he said.

No doubt Microsoft are winding up a punch for a killer E3 this year, with plenty of game announcements to coincide with the reveal of the Xbox Scorpio, microsoft’s 4K console. Let’s just hope they’re already a ways into development on those games, or the next couple of years are going to look pretty bare.

Update January 9, 2017:Scalebound’s creator,Hideki Kamiya, is known for speaking his mind on Twitter, with fans blocked for the slightest grievance and people constantly told to ask their mum when they ask silly questions.

It’s never been surprising to see him say something controversial, but looking at some of his tweets with hindsight does seem to hint at bad relations between him and publishers Microsoft.

There was one tweet in particular, posted back in July 2015, though it was hastily deleted. Still, this is the internet, and nothing is ever truly deleted around these parts.

The tweet said: “MSのクソどもはよー…俺をナメてんのか…” which, NeoGaf say, roughly translates to: “Those shits at MS… are they f**king with me…?”

Elsewhere, in a still live tweet, Kamiya admitted he wasn’t a fan of Microsoft’s marketing:

I don't know. I don't like their marketing. RT @dreamahm you think Microsoft handle scalebound marketing better than Nintendo with w101?

In a follow up tweet he said, “See the main art of Scalebound at their site. It’s AWFUL.” And he also went on to say “it’s junk”.

Clearly things weren’t all rosy in the partnership, then. It’s probably telling that Kamiya, a serial tweeter, hasn’t posted from his account so far this year.

Additionally, the game’s trailers are no longer hosted on the Xbox YouTube channel.

Update January 9, 2017:Microsoft have confirmed thatScalebound has been cancelled.

In a statement provided toIGN, Microsoft said, “After careful deliberation, Microsoft Studios has come to the decision to end production for Scalebound.”

The statement goes on to say that fans should instead look forward to the rest of their first-party lineup.

“We’re working hard to deliver an amazing lineup of games to our fans this year,” they continue, “including Halo Wars 2, Crackdown 3, State of Decay 2, Sea of Thieves and other great experiences.”

Microsoft would not confirm whether they or Platinum now own the Scalebound IP, nor would they confirm if they were willing to work with the Japanese studio on other projects in the future.

Original January 9, 2017: Excited for Platinum’s upcoming RPG where you fight alongside a massive dragon? Now’s probably a good idea to temper those feelings, as it may well have been cancelled.

Scalebound, a game headed up by Bayonetta creator , was first shown off in 2014, but we’ve seen very little of it since.

According toKotaku,multiple sources have confirmed that it’s been in development hell and may never see the light of day.

It’s supposed to release this year for PC and Xbox One, but the release has been missing from recent Microsoft communication about the future of Xbox One, and it’s also been removed from the official Xbox site, adding heft to those rumours.