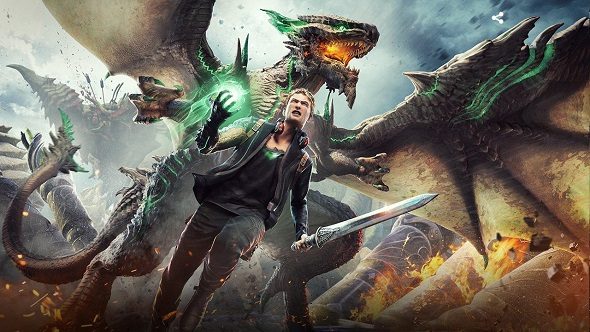 There may still be hope for this draconic action RPG, as Microsoft have seemingly renewed the trademark for Scalebound. According to website Justia Trademarks, Microsoft filed for the extension earlier this month, despite announcing the game’s cancellation back in January.

For titles that are definitely alive, check out our list of upcoming PC games.

This news is even stranger when you consider that not only has Scalebound been scrubbed from all Microsoft websites, but director Hideki Kamiya issued a statement, formally apologising to fans for the game falling through. While Platinum may have moved on, it could be that Microsoft cannot let four years of work and a fair share of money go down the tubes.

Seeing as Scalebound is owned by Microsoft, they could be looking to retrofit much of Platinum’s original design with a new developer. Reports from SomosXbox have even claimed that Microsoft are doing just that, with them now rebooting Scalebound and hoping to release the project sometime in the future.

Equally, this could be Microsoft’s attempt to stop other developers poaching the Scalebound name, by swooping in once the registration has expired. Either way, Microsoft seem determined to hold onto Scalebound for that little bit longer.

We are still awaiting comment from Microsoft, so we’ll update you if any news comes out. Who knows, we could even see elements of Scalebound appear in a future Platinum game. Maybe Bayonetta 3 will have the Umbra Witch teaming up with a massive dragon.