Despite being made by a lot of the same team as 2019’s Code Vein, Scarlet Nexus – also a third-person, melee-focused anime game – is definitely not a Soulslike. Instead, it’s an intense character action game with psychic powers and absurd monster designs that would make Hidetaka Miyazaki blush – and if that's your thing then you can buy it here. Unfortunately, those great qualities are offset by a daft story, irritating characters, and a dreary game world.

The story takes place on an alternate Earth where two countries are reliant on psychic soldiers to protect them against attacks by twisted creatures called Others. There's a civil war broiling away in the background that erupts partway through the story, and no shortage of political intrigue and teen drama. All of this makes for a perfectly fine jumping-off point, but Bandai Namco Studios overstuffs every little nook and cranny of the world with perfunctory details that only serve to bog down the story.

There is a narrative here, but it's overwrought, melodramatic, and steeped in worn-out tropes. It’s written with the confidence of a game that has a detailed, expansive world, but in reality it labours over very ordinary things. Plot elements are introduced and then forgotten about, there are made up words for everything from drones to health pickups, and military branches with names like Septentrions – it's a lot of noise to wade through.

Scarlet Nexus’s biggest narrative failing is its characters. Despite a hefty cast, there are no real standout characters and I found it difficult to like any of them. Companions like Shiden are memorable, although mostly because he’s selfish and abrasive, and Arashi can at least be wry and funny, but that’s about it. It’s not helped by every character seemingly having the same face – there are tiny differences, but for the most part the outfits are doing the characterisation. 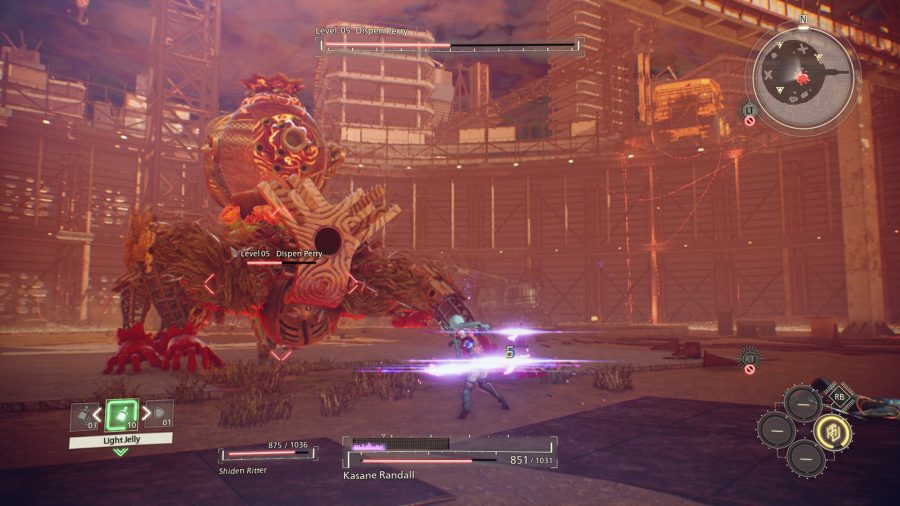 It’s a shame, because Scarlet Nexus starts out promisingly by having two separate characters, each with their own unique storyline and playstyle, immediately doubling the game’s already extensive playtime. Yuito, the upbeat and positive of the two, is a close-range fighter, while Kasane, who’s slightly frosty by comparison, has more range. Unfortunately, neither of them really grows as the story progresses, and there aren’t many opportunities to get to know them outside of the main story.

Bond Episodes – side-stories that help deepen the relationship between characters – don’t feature dialogue choices, so you often take a backseat for minutes at a time. Frustratingly, you need to increase bonds in order to unlock better powers, so sitting through these episodes feels mandatory when in most games getting to know the characters is usually the best part.

Thankfully, Scarlet Nexus is an action game first and foremost, and the combat is good enough to make up for its narrative missteps. It’s quick, stylish, and loaded with enough depth to ensure fights never get stale. 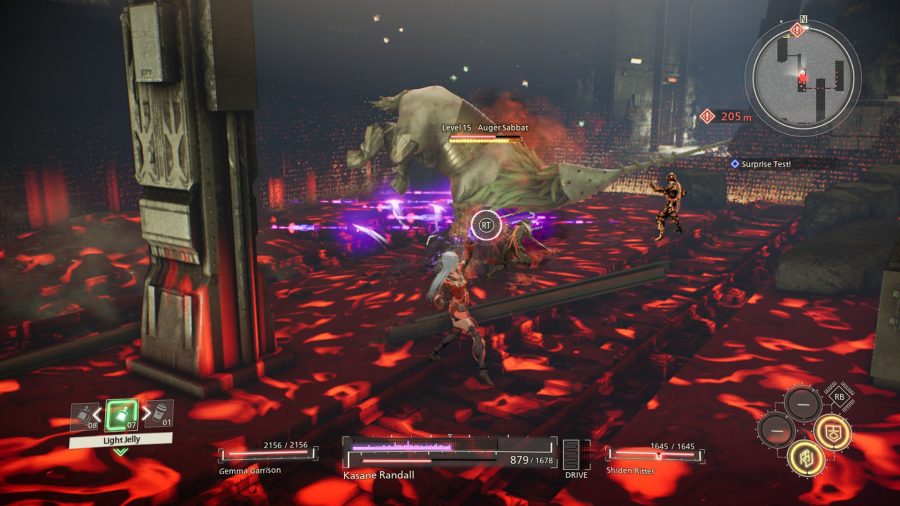 The basic suite of attacks is par for the course with the genre – there’s a light attack, dodge, backstep attack, and a slashing uppercut that knocks foes into the air where you can continue to mete out punishment with aerial attacks. But combat gets really interesting with the introduction of psychokinetic powers. For the most part, psychokinesis is just hurling nearby objects at enemies – anything from a small vase to an SUV – and that never gets old. Occasionally an object can be used as an ultra-powerful special attack, such as repeatedly smashing a statue into an enemy, emptying a water canister to make them wet and susceptible to electric attacks, or my personal favourite, manually driving a truck at them.

Combat gets even better when you can use your companions’ unique abilities. These include electricity, invisibility, hypervelocity (basically bullet time), duplication, teleportation, the ability to see invisible enemies, and fire. These powers help in taking down enemies quicker, but they can also be used tactically – for example, throwing an oil can at an enemy and then attacking with pyrokinesis will result in a devastating explosion.

More like this: Here are the best anime games on PC

Most enemies have armour that you’ll need to whittle down before you can get at their soft, squishy flesh. Get their health to zero and they die, of course, but if you break their armour you can pull off over-the-top (even by anime standards) insta-kill animations. When all the mechanics flow together Scarlet Nexus’s battles are brilliantly bombastic. There’s also the Brain Drive and Brain Field modes, where you enter a sort of brainpunk rage mode – the latter is satisfyingly overpowered, but spending too much time in it can kill you, so use it sparingly. 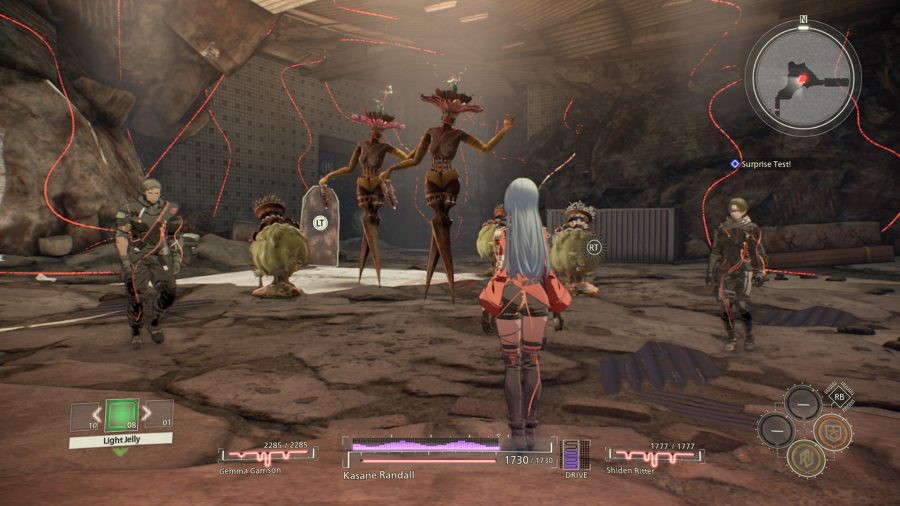 The combat is quick, surprisingly tactical, and always thrilling. There are so many potential options available to you at any given moment, so provided you’re not just hammering the basic attack button all the time you should have a blast. It helps that Bandai Namco Studios does a great job of introducing and encouraging the use of every single power, ability, and special move available. Combat gets more complicated as you progress through the story, right to the end of the game, but I didn’t feel overwhelmed at any point.

Complementing the flashy combat are Scarlet Nexus’s menagerie of monsters. The Others are quite possibly the most preposterous creature designs of any game I’ve ever played. You’ll battle a vase of flowers on legs, wearing high-heels, and with a skeletal tails. Another is literally a giant vat of wine on hooves, with massive arms and a tree growing out of it. Even the names are hilarious – fingers crossed that Scummy Rummy, Winery Chinery, and Cushion Pound will be among the top baby names of 2021.

There are a couple of hitches with combat that keep it from greatness. For starters, dodging feels pretty inconsistent and it’s never really clear when you should press the evade button. Making a perfect dodge and getting a counterattack feels glorious, especially when throwing an enemy’s own projectiles back at them, I just wish I knew exactly how to time each dodge so I can do it more often. Human boss encounters are also a sore spot, often creating jarring difficulty spikes, taking too long, and repeating mechanics. 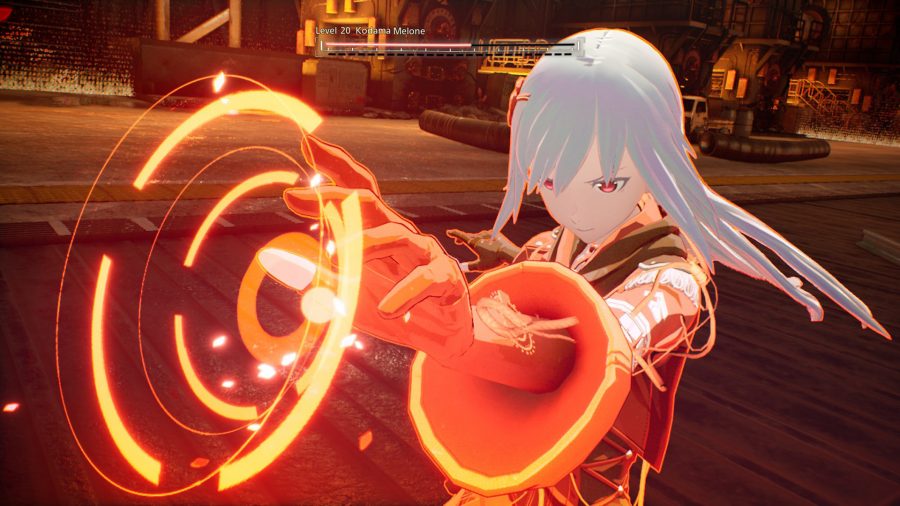 What makes Scarlet Nexus so frustrating is that the rest of the game does its best to diminish its excellent combat system. The dull cookie-cutter characters and overblown storyline are part of the problem, but the worst part is probably the world design. Environments and level design are generic throughout the campaign, incorporating the eclectic likes of construction yards, grey corridors, ruined city streets, and the occasional icy area. Every time the level design threatens to do something cool – like an area filled with giant furniture as if you’ve been shrunk, or an Inception-like mirrored city in the sky – it’s promptly abandoned or reserved to the background.

Levels are very linear, and to make matters worse you return to the same dreary environments multiple times over the course of the campaign. You revisit one ruined city three times, and each time the item pick-ups reset so you have to check all the side rooms again.

The drab level design doesn’t make Scarlet Nexus much fun to look at when you’re not fighting nightmarish monsters. The draw distance is particularly problematic, as in most of the bigger arenas enemies will simply vanish if you stray too far away from them. 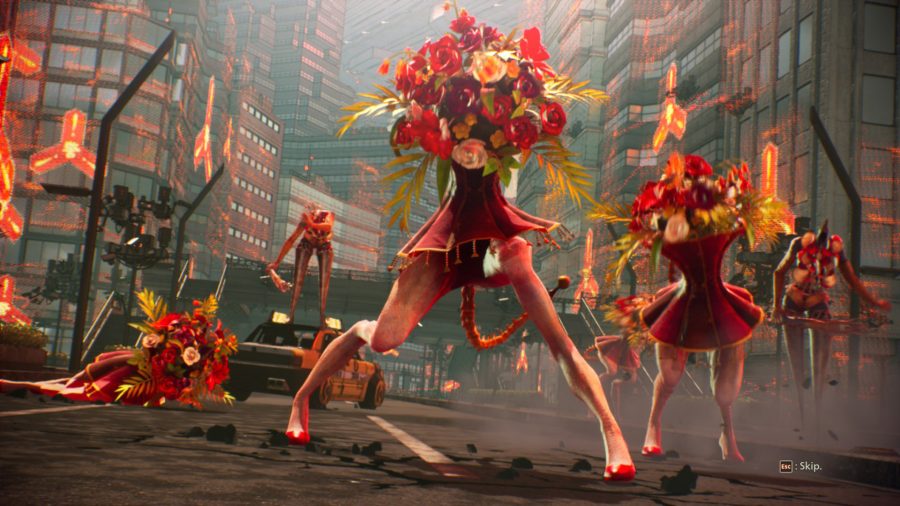 Still, the cel-shaded anime look is pretty and will help Scarlet Nexus age with grace. And while all the characters look like carbon copies of each other, the battle effects are great – especially the flashy Brain Field which turns the battlefield into a Daft Punk music video – bringing a lot of personality to proceedings. Speaking of music, the soundtrack is mostly awesome, although there are some sudden jumps between J-pop beats and sweeping orchestral pieces that will raise an eyebrow.

If anime is really your thing and you focus on battling weird monsters, then you might love Scarlet Nexus. In the thick of battle, when you’re piling on the psychic powers and dodging attacks from sentient ceramics, Scarlet Nexus can be a lot of fun. Unfortunately, pretty much everything else works against that.

Scarlet Nexus is out later today and you can buy it here. You can also check out our lists of the best RPG games and the best cyberpunk games on PC if you’re after something else to sink your teeth into.

Bandai Namco's latest falls disappointingly short outside of the thrills and spills of its excellent battle system, but your mileage may vary depending on your fondness for anime.