Sea of Thieves gets a brand-new premium cosmetic to help support charity today. The pirate game’s new addition is a snazzy sail called ‘Sails of Union’, which will be available to grab for a limited time and support Cancer Research UK’s fundraising campaign, Stand Up To Cancer.

The Sails of Union, which you can check out fluttering in high seas action via the YouTube clip below, was created jointly by Xbox and Stand Up To Cancer for the charity’s Game On campaign, the organisation announces in a press release. This campaign is focussed on encouraging gamers to tackle some new challenges and “make their next game count” to help support the charity’s work. The Sea of Thieves cosmetic treat costs £4.99 and will be available to grab until November 6. 75% of each sail sale made through Steam, and 100% of each sale made through the Microsoft Store, will be donated to Stand Up To Cancer.

If you’re based in the US and decide to go for the sail, your donations will go towards Stand Up To Cancer US instead.

Here’s the cosmetic in action: 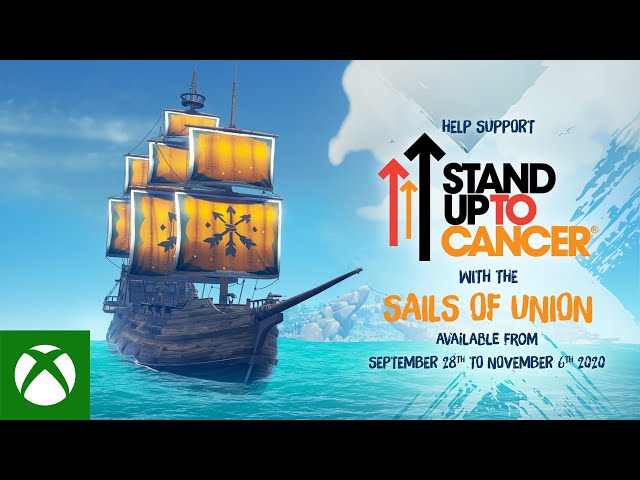 But that’s not all – players who sign up to the Game On campaign can also be in with a chance for some “epic Xbox giveaways”. The “top individual fundraiser will win a 6-month Xbox Game Pass Ultimate token and a Stand Up To Cancer customised Xbox wireless controller”, the charity says. Sweet.

You can find out more about the charity, as well as Stand Up To Cancer ad the Game On campaign at its website here, as well as buy the Sea of Thieves Sails of Union here if you’re keen to grab some of your own.