Until now, Sea of Thieves has been a game about player-driven narratives, about the journey rather than the destination. In an emergent open world, what you and your crew get up to on the high seas – whether that’s battling a Kraken, taking on Skeleton Forts, or simply ferrying livestock across the ocean – has formed the core of the game’s story.

With the game’s upcoming Anniversary Update, however, that’s about to change. Stories will still emerge as you haphazardly sail across the seas, but Rare is preparing to launch a new narrative platform. Sea of Thieves design director Mike Chapman and Rare studio head Craig Duncan tells me that “from now on, we’ve got this frame to deliver story-based quests to the world.”

That frame is Tall Tales, and the first story it has to offer is Shores of Gold – a quintessential pirate adventure that will see you exploring sunken ships, solving hidden puzzles, and searching for a mythical island hidden in the fog beyond the Sea of Thieves.

After spending the past year building up the Adventure mode’s emergent world, Rare’s team now have enough tools to build something on top of that. “I think now we’ve got that richness in the world, we’re ticking that box by scratching away at the surface,” Chapman says. “It allows you to have that authored narrative, but the entire game’s going to get richer because the world’s been given its dues.” 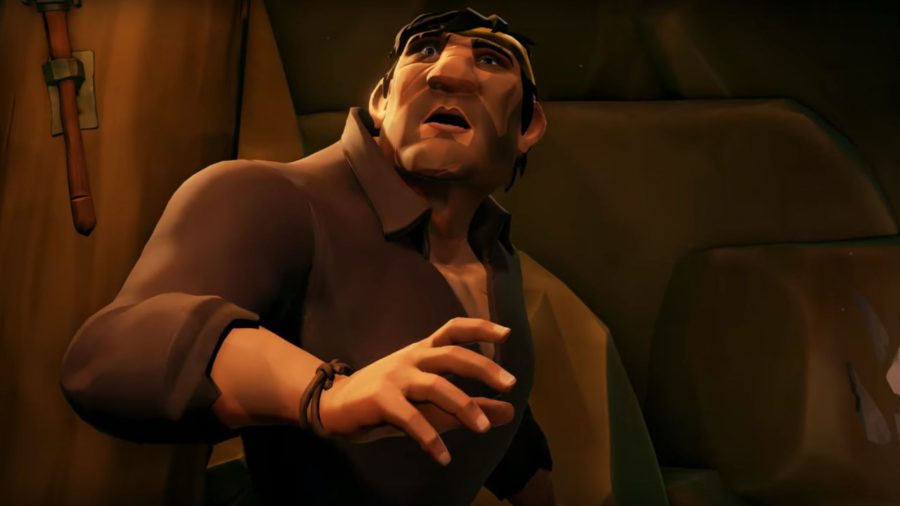 It’s clear just from spending time in the world that the impact of Tall Tales will be felt long after you’ve finished the story. Chapman says that, where it makes sense, new tools you come across in Shores of Gold will be added to the rest of the world. Traps located on a particular island might affect your ability to hunt for treasure, while Collector’s Chests that can be used to hold objects in the world might simply wash up on the beach to be discovered.

Arrrr: Here are the best pirate games on PC

Rare’s clearly gone further than that, and Chapman and Duncan mention enchanted versions of your current kit that can interact with the world in new ways, and add that they’ve “got Tales that showcase lanterns that reveal ghosts in the world.” The use of those items might seem limited in Shores of Gold, but the pair seem keen to explore them further – “in the future we could tell a whole set of Tall Tales that are ghost stories.”

The world is begging for that roleplay, it's so immersive

While the new narrative is intended to be part of an ongoing framework, Tall Tales are designed to play out differently each time you take them on, so you can replay them while waiting for the next story. While a few key details will be the same every time, Chapman tells me that there are certain inputs which change regularly. “The magic,” he says, “is in the sense that that authored tale, with all of its multiplicity of options, is set against the stage of a shared world.” The emergent nature of Sea of Thieves means that every time you play a Tale, a storm could roll in as you’re searching for clues, or monsters could attack as you’re trying to return to port. Everything’s meant to feel unique to individual players, just as it does in the emergent world.

At their core, both Tall Tales and Anniversary’s other major addition, dedicated PvP mode Arena, “are just different ways to play that same core experience,” according to Chapman. But Tall Tales is specifically about indulging the pirate fantasy that the game has always promised. “The world is begging for that roleplay – it’s so immersive. Even at launch, when you looked at our world, not only did it look like a Rare game, it looked like a world that you just wanted to get lost in and have adventures. Tall Tales is just indulging that side of it.”