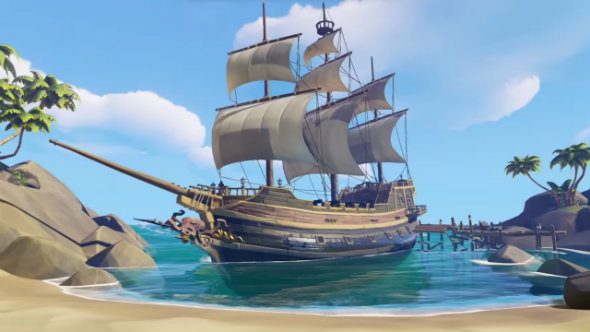 If you’ve ever had the urge to plunder the seas and murder several wives, Black Beard style, but don’t want to spend the rest of your life in jail, the MMORPG Sea of Thieves might be just the boat to board. Unfortunately it’s still in closed Alpha, but a newly released video of the Alpha version 0.1.1 shows how this pirate-simulator is looking to become ship-shape rather quickly.

Before walking the plank in Sea of Thieves, why not try some of these other outstanding MMORPGs?

As you can see from the trailer, the update brings new islands and outposts to explore, while the overall polish of the game is shinier than a freshly scrubbed deck. Made by legendary developer Rare, it’s no surprise to see such rapid progress.

To take part in the Alpha you’ll need to be part of the Insider Programme, but even then that doesn’t guarantee access. Players are then selected from this pool, which started with a relatively small group of just 1000 sailors. We’d kill for a ticket to board the Sea of Thieves Alpha, as the mixture of ship-based combat, exploration and general piratey goodness looks like it’s going to offer a very different MMORPG experience than we’ve ever sailed before.

If you do want to try your luck at getting into the seven seas of the Alpha, head over to the Insider sign-up page, but it seems it’s going to be a while yet before the game is ready for the masses of a truly open beta.