There are two kinds of remasters: the remake that takes the concepts and plot of the first game and otherwise completely reinvents it; and the enhancement that simply re-renders a title for a new generation, bringing with it all the old bugs. Having played the opening of Secret of Mana’s turn on the revolving door of nostalgia, it manages to be the former while feeling like the latter – for better and for worse.

For some more recent great RPGs, check out our dedicated list.

The good is probably obvious. The remaster has the immediacy and lack of grandstanding that was lost somewhere between the SNES and now. After 30 seconds of intro you are right into the world, wandering around a cutesy, brightly-coloured fantasy land that will soon be threatened by ghouls, ghosts, giant bug monsters, and more. Everything from the main character’s hairdo to the sword he eventually pulls from the ground is comically large. For a moment, you are young again, and everything will be ok.

The ‘90s-style pacing is joined by the fast-if-simple gameplay that four buttons and a d-pad so often allowed. The teenage adventurer under your control runs at the speed of sound, hacks across half the screen with a single sword slash, and easily takes on five enemies at once even before you have left the starter forest. It just /feels good/, and in our current world of pop-up tutorials and endless systems, it’s appreciated, even if I wouldn’t want to eat it for every meal. 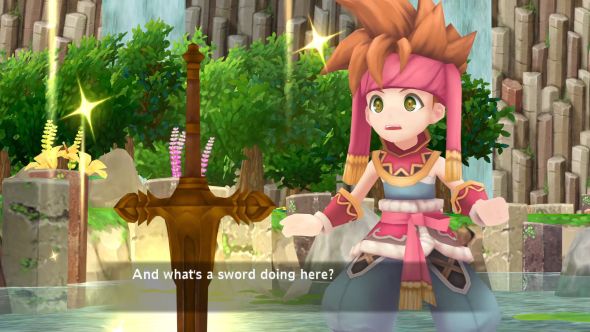 This is all accompanied by a beautifully recreated soundtrack that I feel I am not fully appreciating due to the scant time I spent with the original many moons ago. It is good, I like it, and I will doubtless spend the next ten years defending it online like every other remastered soundtrack that has come out since the first marketing manager crawled from the ocean and croaked “anniversary edition.”

However, Secret of Mana’s commitment to history goes a bit deeper. Characters in cutscenes move along their old paths, stuck so rigidly to a grid system that it looks unnatural. The instant flip-to-face that comes when talking to a character with their back to you – the only way things could work in the bad old days – feels disconcerting as the new 3D models cause the game to veer further into the uncanny valley. Unlike their delightfully low-poly models, it isn’t charming.

Which is a shame, because since the crowning era of the JRPG we have lost the inane conversation of random NPCs, asking you if you have seen their dog or telling you how great shorts are. Secret of Mana has that, and many more touches you don’t realise you have missed until they are back. Its oddly structured combat system, which sees you waiting for your sword to recharge or else suffering reduced damage, is still quaint, still interesting, and still hard to master all these years later. 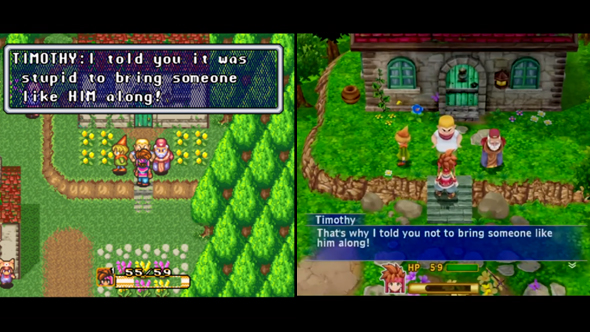 Inevitably, I have forgotten the subtleties that made the game so legendary, and sadly, the ultra-short demo build only made it as far as the first boss (perhaps Square Enix are worried about spoilers?) preventing me from rediscovering the party system, and even most of the core plot. I am looking forward to finding all of that again.

What I am left with reminds me strongly of StarCraft: Remastered. If you will excuse the tip of my Blizzard-branded soul, both were beautifully realised warm ‘90s blankets that I was happy to wrap myself back up in. However, StarCraft: Remastered is literally built on an engine from 1998, one that needed to still work with all the old code and systems. Secret of Mana does not have those requirements, but it feels like it was made with them in mind. Whether that is a commitment to authenticity or because it, too, is constructed atop its old form I do not know, but it doesn’t sit right.

That will either be gone by release, or we will learn to live with it over a few hours of play. It does not break the experience, but it is a constant reminder of the videogame you are playing, rather than a pleasing echo of simpler days. Even with that weird fly in the digital ointment, however, more Secret of Mana will be most welcome.