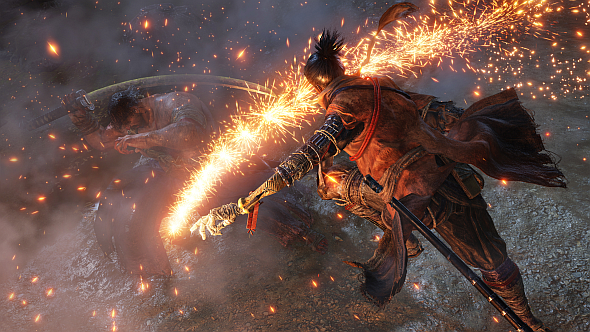 Sekiro: Shadows Die Twice has no classes from which to choose, no character stats to level up, no option to create your own character, no multiplayer of any kind, no armour or weapons to find or equip, and no souls (or equivalent) to collect – or lose after dying. Just to reconfirm: Sekiro is the next big game by FromSoftware, the maker of Dark Souls and Bloodborne.

Indeed, Sekiro can scarcely be called an action-RPG. FromSoftware’s Yasuhiro Kitao describes it as an action adventure game. One of the few elements that might seem familiar is your character’s prosthetic limb – it’s capable of hosting a number of gadgets, which you can find scattered around the world. That sounds pretty reminiscent of the trick weapons found in Bloodborne, if you had a temporary flirtation with a PlayStation 4 to enjoy that.

You probably already knew this, but FromSoftware have made some of the best games on PC.

These gadgets include the grappling hook that we saw in the action-packed reveal trailer, as well as an axe that can help smash enemy shields, a shield of your own with which to block damage, and a torch that can set enemies on fire.

All of these gadgets can combine with your perpetually-equipped katana to offer unique attacks – you can see some of this on show in the trailer, which you can view below.

This is all according toPC Gamer’s impressionsof Sekiro from the show floor at E3 this week and they have plenty more to say, so head over there to read their preview in full. But, y’know, come back.

If you prefer to listen than read, the always-excellent Soulsborne YouTuber VaatiVidya has a thorough breakdown of Sekiro’s gameplay on his channel:

We don’t yet have a specific Sekiro: Shadows Die Twice release date, but note that Bloodborne and Dark Souls III both dropped in March, so it’s likely Sekiro will drop in that month next year. Clearly a lot is changing, but sometimes that’s ok. I mean, justlookat that trailer.