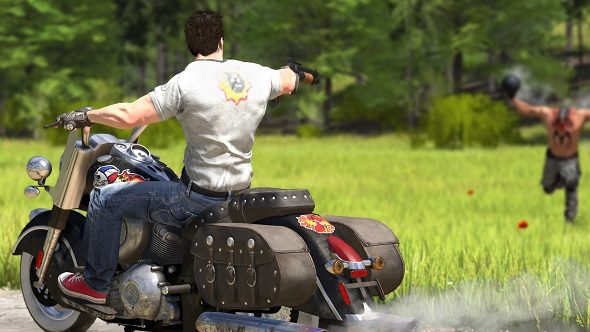 Serious Sam 4: Planet Badass will reportedly have 100,000 enemies rendered on-screen at once. It seems developer Croteam wasn’t exaggerating when saying the upcoming game would bring back the “old-school” Serious Sam formula, but “on an even bigger scale.”

The actual numbers attached to that scale, however, weren’t made entirely clear until now. The best we had to go on was the game’s announcement trailer, which does look like it could have been made in the game’s new engine. In that trailer, which you can check out below, you can view Sam cresting a hill on his motorbike to be met with a veritable horde of monsters.

Admittedly, that was only a trailer, but it was an early look at the potential scope of the game. Coupled with a statement (via Polygon) in which Croteam says “the game has expanded to much, muuuuuch bigger environments with legions (no, dude, legions) of enemies,” and it starts to look like the developer may not have been exaggerating.

Press demos for Serious sam have been taking place at E3 this week, and according to a tweet from VG247 deputy editor Kirk McKeand “the new Serious Sam has 100,000 enemies on-screen.” That’s not in a level in total, but all apparently rendered on-screen at the same time. That number has been confirmed by a representative from Devolver Digital.

According to McKeand, you can plough through that ludicrous number of enemies in a combine harvester. Croteam is sticking with the series’ thematic tone, then.