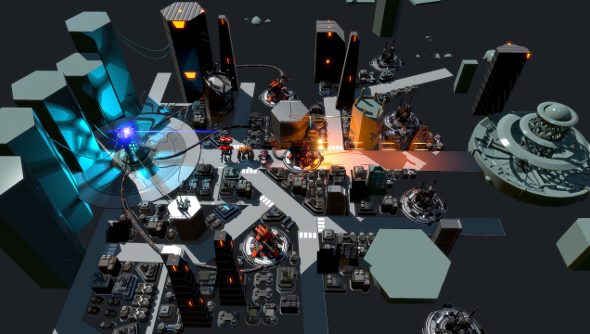 Stardock has teased its new RTS, Servo, created by Age of Empire veterans, ahead of its full reveal early next month at GDC 2015.

It’s “a new kind of RTS” boasts the official site, which also displays concept art and map renders. What’s new about it? Definitely not the robots.

One of the images that has accompanied the announcement suggests some sort of tower defense element. It’s covered in lanes, punctuated by what looks like artillery towers. The second map is dramatically different, but again we see towers and lanes.

While the renders show only robots, the concept art reveals three organic races, two alien and one human, as well as even more robots.

Another images shows buildings in different sizes and states of repair, from clean to destroyed, heavily implying that buildings will be destructible. Is that important? Who knows!

Instead of me sitting here making more predictions based on concept art, why don’t you have a look for yourself and get some speculation going in the comments. What do you reckon Servo’s deal is?