When somebody incants the words ‘ex-Witcher dev’, you pay attention but are none the wiser for the label. CD Projekt RED’s opus is so sprawling and multifaceted that you could pick one of many lessons and run with it. Witcher producer Tomasz Gop, for instance, took Geralt’s dodge-heavy, preparatory combat and spun it off into the Dark Souls-alike Lords of the Fallen.

The Witcher 3 stands among the best RPGs on the PC.

What quest designer Jakub Rokosz’s Fool’s Theory have gleaned from their Witcher experience is a sense of focus. Just as CD Projekt forego character classes to double-down on the fantasy of the monster hunter who haggles for coin and sniffs out griffins, isometric RPG Seven devotes itself to one vocation only: thief.

“It was a crazy idea that in every single RPG you are always stealing things. You are always trying to get into someone’s house and rob them,” says Łukasz Kubiak, co-founder of Seven publishers and co-developers IMGN.PRO. “We could create a game in which you could be a warrior or magician or whatever, but probably most people will go into a house of NPCs and try to steal something.”

It’s a fair point, as any former Gray Foxes will concede. True to genre, there’s still a certain amount of self-determined character variation involved – you can be more warrior assassin than master sneak if you like. But in Seven, your profession is fixed; your skillset tuned toward secret excursions in the dark. 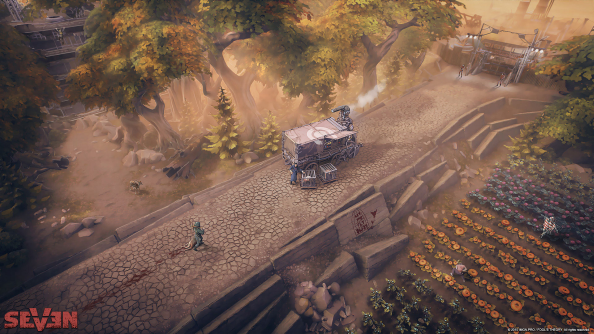 Speaking of which: is this the only isometric RPG in existence to boast a parkour system?

“It’s a really action-oriented game and you can run freely through the world,” explains Kubiak. “You can run through the buildings, climb on the walls, run across the rooftops. You do not need to move slowly through the streets.”

Best played with a gamepad, Seven’s freerunning is a far cry from clicking to determine where you want your Pillars of Eternity party to be and waiting for them to turn up there. The unconventional control method is still in pre-alpha, but Fool’s Theory and IMGN.PRO are confident they’re onto something.

“The hero is [a] really fast guy, so when he’s running away or when he is chasing someone it’s pure action,” says Kubiak.

The difficulty, apparently, lies in ensuring the environments are readable to players seeking to climb all over them. By sinking time and effort into a “really awesome” clipping mask, the two developers have managed to put together buildings with clearly defined boundaries – that don’t bleed unhelpfully into the background. 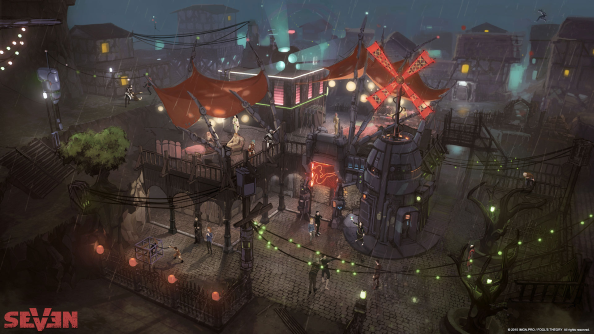 Where isometric RPG environments in the Black Isle tradition tend to operate as flat paintings for the player to navigate around, Seven’s world has been layered like a post-apocalyptic wedding cake. Clamber to the top of a cliff and you can appreciate the vista spreading out beneath.

“We’ve got this cool system and we want players to use it all the time,” enthuses Kubiak. “At this point you get a lot of fun from just running around the towns and the ruins of this ancient civilisation.”

Fool’s Theory and IMGN.PRO describe their setting as post-post-apocalyptic – a world that’s outlived the end of civilisation by some thousand years. Humanity has fought its way into a second medieval period – but benefits, too, from scavenged technology left over from the cataclysm.

“Our hero can use some really high-tech technology to find access to places like vaults,” says Kubiak. “We’re mixing medieval with some steampunk elements.” 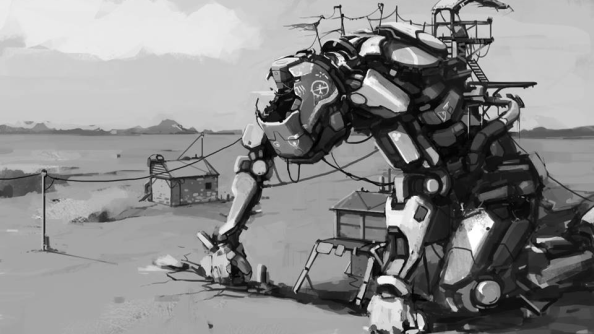 The two studios have looked to the Thief series and its peculiar pagan-punk vibe. Seven also shares a sense of vulnerability with the seminal stealth game – a protagonist weaker than his opponents, able to overcome greater odds through cunning and ingenuity.

Just as you’d be hard-pressed to name another RPG that dabbles in parkour, you’d struggle to find another stealth game with a fast-forward button – implemented here to ensure players don’t drift off while hiding from the guards.

But one thing the finest RPGs and stealth games have in common are clockwork systems that intermingle in interesting ways as the player passes through. That’s something the Seven team are clearly shooting for. They paint a picture of a player prowling about town, weapons concealed so as not to alarm the populace, overhearing the location of a well-protected prize. Once there they might infiltrate under cover of rain, knowing the streets will be emptier – but taking their time so as not to splash conspicuously in puddles. 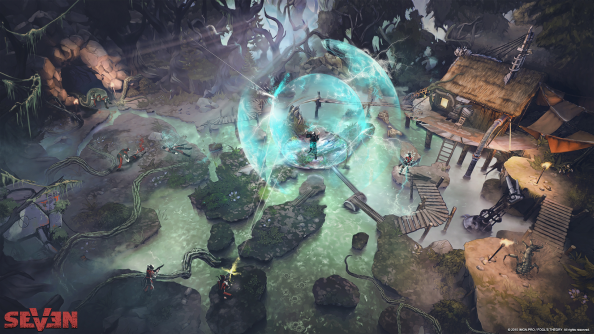 Speaking of which, there’s another characteristic of the Witcher that Kubiak’s colleagues have brought over from CD Projekt: a certain moral muddiness.

“The world is pretty complicated,” he says. “There is no black and white. Everything is grey. You are not a knight in shining armour defending people – you’re a thief.”