It’s an image inextricably linked to the ‘90s: the big-bosomed girl on a game box, usually wearing ill-fitting armour and a sultry expression. It’s something most of us would like to be able to leave in that decade – an ugly artifact from a period when games hadn’t yet found the confidence to let go of pulp fantasy.

But if the handling of sex is a barometer for the maturity of a medium, then, in the eyes of the mainstream at least, ours seems to have cracked sometime around the early ‘00s.

All this talk about sex… time to find out which the best sex games on PC are.

“Everyone comes back to GTA,” Stephanie Alys, co-founder of sex toy manufacturer MysteryVibe, says. “That’s the game that everyone refers to when they talk about sex in gaming.” 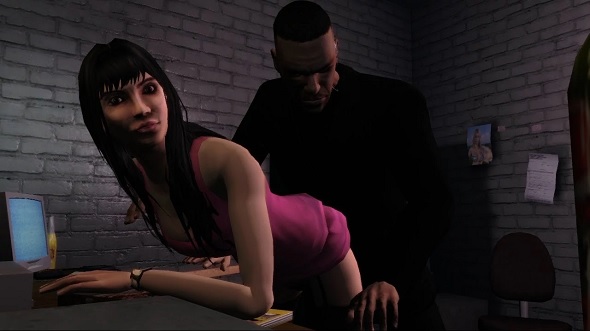 Surely we’ve done better since than hookers and hydraulics? Something more positive than the Hot Coffee debacle should stick in the mind. But for the most part – perhaps for fear of mishandling, and slipping back into the mistakes of the ‘90s – triple-A games have often steered clear of sex.

“When I think about games where sex may be relevant, they are telling a story, and the only reason sex may have been put in there would be to progress that story,” Alys, whose talk at Develop 2017 explored the confluence of technology and sex, suggests. “Maybe it’s about someone who is exploring a new planet, or there is a villain that needs to be taken care of, and people think that sex is a side thing. Or perhaps sex is used as a driver for a character – so there was someone who’s been kidnapped, and the player must go and rescue them.”

A lot of this will sound terribly familiar if you’ve played a Mass Effect game in the past decade. In the triple-A games that do broach the subject, the possibility of sex has often been tied to background relationship metrics which, if not thoughtfully implemented by developers, can make sex seem like an iffy reward. And if those developers are really unthinking, you wind up with something like The Witcher’s collectable ‘romance’ cards – literal, NSFW trophies for getting into the pants of the women Geralt meets on his travels.

“Especially in the past, you’ve got a lot of games that are very male-driven in terms of point-of-view and protagonist,” Alys notes. “I think it’s gotten a lot better because you can [more often] choose the gender of your character.”

Credit where it’s due: Alys points to another BioWare game, Dragon Age: Inquisition, as a recent instance where a more positive portrayal of sex slipped into mainstream gaming, so to speak. There, companion characters weren’t simply awaiting the attention of the protagonist – each had their own established sexualities and tastes that needed to be respected and accommodated.

“A character being eligible for a romance doesn’t necessarily guarantee that they will be successfully won over,” Dragon Age creative director Mike Laidlaw wrote in the BioWare forums, which are now sadly offline. “These characters have their own agendas and opinions, and the choices a player makes during the game have a definite impact on their affections. That’s intentional.”

Moreover, BioWare supported not only straight, gay, and bi relationships in Inquisition, but platonic friendships too.

“We’ve designed each follower to have a rewarding story arc for players who choose to engage with them,” Laidlaw said, “romantically or not.” 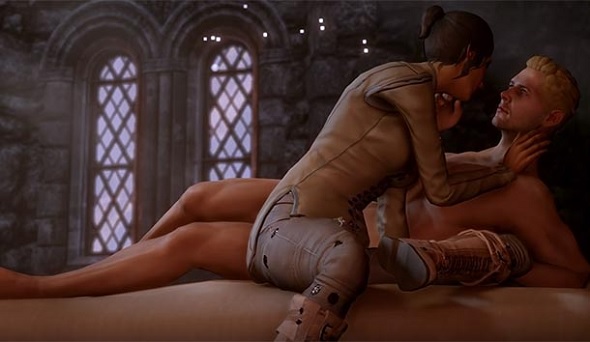 Perhaps tackling the sense that sex is an obligation, for players or the characters they might choose to woo, is one of the most important things that mainstream games can do.

“The way that we view sex has really changed over the last few decades,” Alys says. “If we look back, sex always used to be seen as this functional activity that would bring a child into a family – [part of] a marriage between a man and a woman. That was how sex was portrayed and that’s how it was represented in many different forms of media.

“But if we look over the last few years especially, we’ve seen this real broadening in understanding of what having sex actually means, and people have started to focus more on the pleasure and the fantasy.”

Looking outside of triple-A, the picture improves somewhat. That’s especially true in dating simulators – a primarily Japanese niche that’s enjoyed a tongue-in-cheek renaissance in the last few years. Hatoful Boyfriend, a surreal, dialogue-based pigeon-dating game, was a breakout hit, and the genre has since enabled a sex-positive celebration of diversity – as in the suggestively-titled Coming Out On Top, and the father-focused Dream Daddy. These games might not be made by Ubisoft or EA, but they are no longer niche: Dream Daddy featured in the top ten best selling games on Steam when it was released. 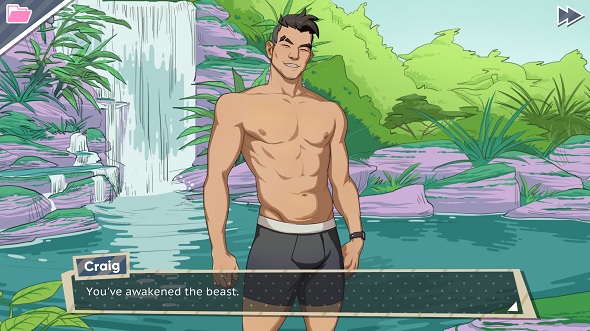 If we’re to continue following that trend for the better, Alys believes we need developers to be just as diverse.

“I think that the technology we create, either hardware or software, is very much a product of its social and cultural history and context,” she explains. “So if we want to create better content when it comes to diversity and portrayal, we really need a diverse group of people making these products.

This feature was originally published on August 2, 2017. Games might also have a thing or two to teach us about love, of course.