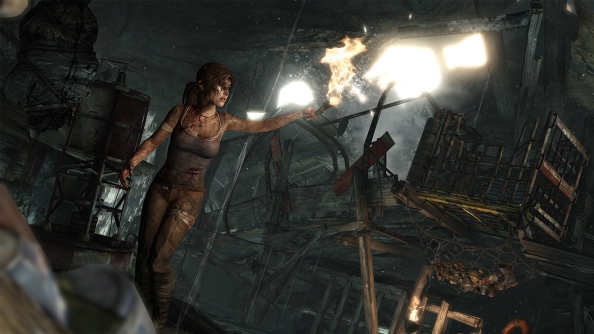 Tomb Raider, Rise of the Tomb Raider, and now Shadow of the Tomb Raider – that’s how naming conventions go according to an apparent leak on a busy subway. Just in case you think a subway train leak sounds far-fetched, just remember that Assassin’s Creed 4: Black Flag was leaked on an aeroplane.

For other upcoming PC games that have actually been announced, click that link there.

Redditor Tripleh260 was riding the subway when they noticed a nearby laptop had an official-looking document on-screen. The title, Shadow of the Tomb Raider, made it clear it was for a Lara Croft sequel.

Kotaku have confirmed with their sources that Lara Croft’s new adventure is called this, at least for now, lending the find some extra credibility.

It wasn’t just any subway, either. This was the Montreal subway.

The astute among you might know that this isn’t San Francisco, where Tomb Raider developers Crystal Dynamics are based, but Kotaku say this sequel is being handled by Eidos Montreal, the studio behindThief and Deus Ex: Mankind Divided.

“The page he was on talked about visuals,” Tripleh280 told Kotaku. “I’m from Montreal, QC. I was going downtown for work and I took a quick snap. I really would love to say more but other than the title, the rest was blurry from where I was.”

There’s not much information outside of the name and development studio, but at least we know there’s a sequel coming, and from a studio with experience in games where player choice is paramount. Could be interesting.