A title like Shadow of the Tomb Raider sets expectations of a much darker game than its predecessor – which, let’s face it, wasn’t exactly a sing-song adventure. The reveal event back in April backed this impression up: an overconfident Lara botches a temple expedition and starts the timer on the Mayan Apocalypse. Yet, for all the doom hanging above Lara, like a Mayan Sword of Damocles, I found it is also a game bursting with life and humanity.

The bustling crowds of the Mexican town in Shadow of the Tomb Raider’s reveal weren’t a one-off. My journey through the sun-bleached Peruvian city of Paititi is made slow by the crush of people. Paititi isn’t the ruins of a lost civilisation but a living, breathing metropolis, where a mixture of Mayan and Inca descendants have migrated and continued to live untouched by the modern world.

Here’s hoping Shadow of the Tomb Raider becomes one of the best PC games.

A daytime walkthrough of Paititi, which I’m told is about three times larger than the biggest hub area in Rise of the Tomb Raider, shows its inhabitants going about their routines. Children play at a river bank while crowds gossip in a mixture of languages in the marketplace – you’ll hear improvised Yucatec, Mayan, even a smattering of English. Lead writer Jill Murray confirms there is a substantial team working on bringing this city to life with many stories. “These are people who have their own lives or challenges,” she says. “Lara can try to get involved, but she has to figure out how to work with them on their terms.”

Indeed, Lara is already blending in with a locally made outfit. She stops to talk to a boy who claims a ghost has stolen his dice, sounding suspiciously like the vendor of a fetch quest. But, thankfully, that’s not the case: instead, it’s a brief moment made to show off Lara’s lighter side, as she acts a bit quizzical, then drops a hint of sarcasm, but nonetheless agrees to keep an eye out for the boy’s dice. For another warm and fuzzy moment: there are llamas you can pet. 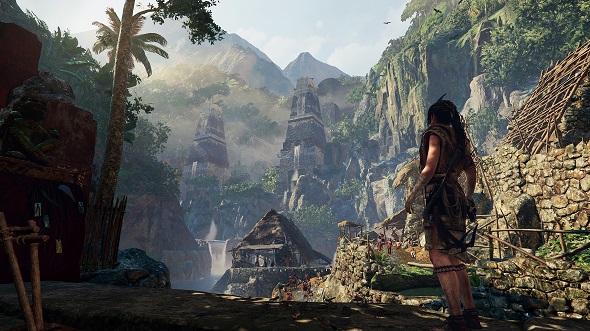 How this city links to the events from the opening in Mexico isn’t clear yet – it doesn’t appear that Paititi has been affected by any cataclysmic disasters. Nonetheless, Lara’s quest to undo the Mayan apocalypse should lend the game a sense of urgency that’s not apparent in my demo. I have complete freedom to explore an open hub and its surrounding environments – no one is fearing for their lives. Still, that doesn’t mean Lara hasn’t already made her world-ending blunder by this point in the game.

“Everything does build towards the same point, even if it has the feeling of openness,” Murray says. “It puts the player in the position of facing the same dilemma that Lara does – she has created problems by always rushing, and now she has to learn to slow down, even as she has this ticking clock on her back.” 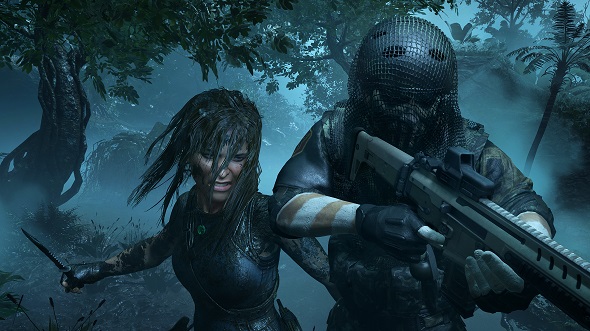 Away from Paititi, I’m dropped into a scene in the jungle, with soldiers from the Trinity organisation hunting for Lara. At this point, she only has a bow and arrows to defend herself, but that is a great excuse to demonstrate a new ammo type. As in the last game, you can craft arrows that cause different types of damage, and in Shadow of the Tomb Raider there are new fear arrows that turn enemies against each other.

Lara’s stealth skills have improved, too, you can now hide behind vines or take out soldiers from the bushes, even stringing them up with rope traps and using mud as camouflage. Level designer Arne Oehme tells me that, in many cases, pacifist players can go about not engaging enemies at all, and still gain XP. “Shadow of the Tomb Raider definitely offers more choices in terms of how you play it,” he says. “In terms of combat, you have ways to disappear into stealth that simply weren’t possible before.” 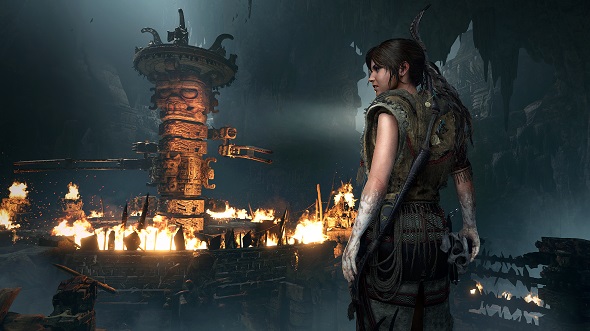 The demo concludes with Lara escaping the jungle when a Trinity leader taunts her via radio that her expedition partner and friend Jonah is dead, which sets her off on a thrilling set-piece through an oil refinery with a helicopter’s machine gunfire at her heels. Despite the lighter touches of Paititi seen earlier, then, Lara returns to dark places. A cutscene of her muddy silhouette emerging from water while a blaze rages in the backdrop evokes Apocalypse Now. As she approaches a fearful soldier slumped on the ground about to meet his demise with a pickaxe to the head, is Lara in danger of becoming The Horror?

My interpretation is admittedly a stretch for Murray, who instead emphasises guilt, complicity, and responsibility as the game’s themes. “Lara has to take stock of the fact that because she has become so powerful she also has the capacity to inflict damage,” she says. “Now she’s brought to a place where she has to question whether she’s in danger of becoming like the enemy.”