I’ve heard Shadow Realms described as Evolve with a wizard. Four players fight through a dungeon packed with traps and monsters that are all controlled by a fifth player, the shadowlord. But, in practice, it plays a lot like Left 4 Dead, albeit with the AI director replaced by a human.

Human directors can be dicks.

Shadow Realms is the first new series from Bioware since they released Dragon Age: Origins back in 2010. More than that it’s a serious departure from their usual fare. It’s a multiplayer only asymmetrical 4v1 dungeon crawler, free-to-play RPG set in the modern day. The studio embraced multiplayer when they made their first MMO, Star Wars: The Old Republic, but that didn’t break any conventions of the genre – Shadow Realms is different. 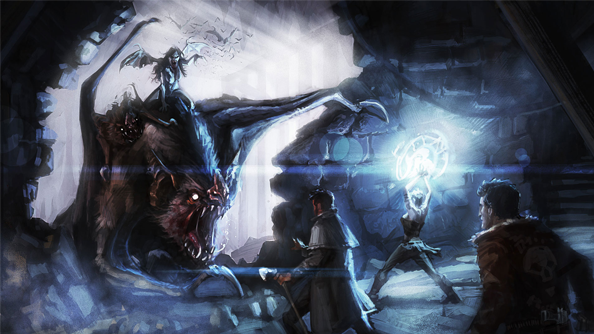 It’s the job of the humans to get through four linked arenas, slaughtering all the AI monsters in their path. Then, before they can return home to enjoy their fancy new loot, they have to fight a final boss figure. The shadowlord must stop them.

The shadowlord is an odd character. It can’t physically attack anyone itself: it’s an invisible spectre that glides about the battlefield throwing out spells and traps. Its most vital power, however, is the ability to possess any monster on a whim, including the big boss monster at the end of the dungeon. Which, considering the boss we fought was a little like a cross between Left 4 Dead’s tank, a prehistoric bear, and shitload of steroids, makes it quite the threat.

If you’re in the intangible shoes of the shadowlord you power doesn’t come from direct attacks but by hitting the humans when they’re already overloaded with enemies. The arenas fill with enemy troops when the humans enter. Everything from weakling skeletons up to ferocious hellhounds. They work to split up the four human players, and pick them off when they’re alone. That’s when the most opportunistic of shadowlords tend to strike. In the game I played the player in the role of the shadowlord would wait till one of us was alone, low on health, and surrounded by AI before hitting them with an immobilising spike trap, then throwing an exploding skull at them, and, for a last twist of the knife, she’d possess a lowly skeleton and smack the killing blow.

Like I said before, humans are dicks.Shadow Realms lets you embrace that inner dick.

At the start of each instance the shadowlord gets to pick which monsters will populate the dungeon. A canny player will select critters that combine well and complement their abilities. Bioware are also considering letting shadowlords select between alternate routes through their dungeon, too.

Shadowlords that excel at wiping out parties of humans will be rewarded with new traps and abilities, as well as new creatures for their bestiary. And, they should be pretty good at killing off parties because the game’s weighted in their favour. Bioware want it to be a real challenge to beat a dungeon. It doesn’t always mean a complete loss, either because human parties enter the dungeon with a quest goal that often isn’t to complete the instance. It might be to find some ancient artefacts or to collect 10 hellhound skulls.

You’ll actually spend most your time playing as a human, not the shadowlord. To avoid lobbies of players waiting for someone to choose to go it alone as the dungeon master, when you launch matchmaking there’s a chance you’ll be selected to play as the shadowlord. More often than not you’ll play as a human.

There are six classes of human to pick from – warrior, wizard, warlock, ranger, assassin, and cleric – each with their own tree of abilities and preferences for different equipment. The classes themselves aren’t wildly exciting; they’re the standard fare we’ve come to expect from an RPG. What will vary them up is that Shadow Realms is set in the modern day: which means rangers with rifles, warriors packing shotguns, and, hopefully, a wizard with a bazooka (the military’s take on a magic missile). 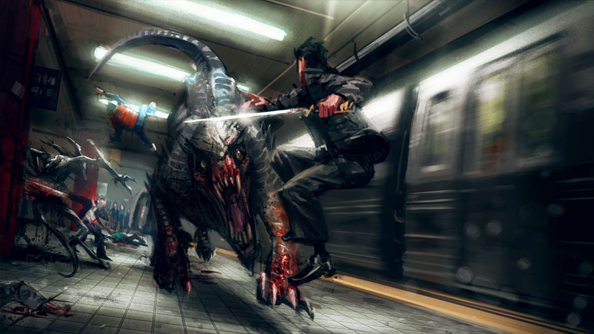 Bioware haven’t added guns to Shadow Realms yet. “Guns are going to be a big part of the game,” James Ohlen, Shadow Realm’s creative director told me, “but we’re waiting till we have ranged combat down with spells before we reinvestigate how to do it with guns.” The warrior I played in the Gamescom demo was armed with a more traditional two-handed axe, only his blue boilersuit setting him apart from the high fantasy warrior.

It was a lot of fun to charge into the centre of the melee, cleaving chunks of health off the AI and generally causing a ruckus but my charge attack and battlerage ability were nothing new. However, this could be a side-effect of a tradeshow reveal, with more creative abilities and outlandish equipment being saved for a later date.

Bioware plan to regularly flesh out Shadow Realms with episodic updates that will add wildly different instances for us to play through. The lore of the game suggests that there are other planes of existence besides our own, and they’ve started to poke through to our universe. The first of these is Embra, the gothic world that was on show at Gamescom. Future episodes will bring in more realms, and the creatures that live there. Technically Bioware have a completely free hand as to what worlds they introduce, they don’t need to have any thematic link to one another. Future games of Shadow Realms could see you jumping from Embra to a world full of dragons, to a planet inspired by Greek mythology, or even to something more like a 1950s pulp scifi story full of Martians and men in black.

I couldn’t get the devs to spill on how often these episodes where due to be released but I’ve my fingers crossed for more than three a year. After all, with Ohlen at the helm, and his experience of turning Star Wars: The Old Republic around with regular, varied updates he’s likely planning something similar for Shadow Realms.

Currently the most exciting thing about Shadow Realms is the shadowlord. From what I saw, the human classes are by rote. They’re fun to play but they’re nothing new. However, it’s clear that Shadow Realms is early in development and there’s a lot of time for those classes to become more distinct. Much of their individual flavour will likely come from how marry magic to a modern setting, and that wasn’t on show at all. That’s still to come and what was playable was exciting enough to have me eagerly awaiting future updates.

If you like the sound of Shadow Realms you should sign up for the closed alpha that will be launching later this year.