Sheltered is a post-apocalyptic survival management game. A family of survivors have discovered an underground bunker, a sanctuary from the the myriad hazards above ground, and are attempting to start fresh in a deadly world.

It will quickly prove to be a pretty horrible life.

By the eighth day, my wards, the family I was tasked with protecting, started eating each other. Dan, the mullet-sporting patriarch, died from radiation poisoning, and before his corpse could get really gnarly and rotten, I commanded his wife, Elaine, to “harvest” him.

People sometimes keep the ashes of their loved ones on the mantlepiece, but Dan got pride of place on the ration shelf. Everybody loves a tin of dad stew. 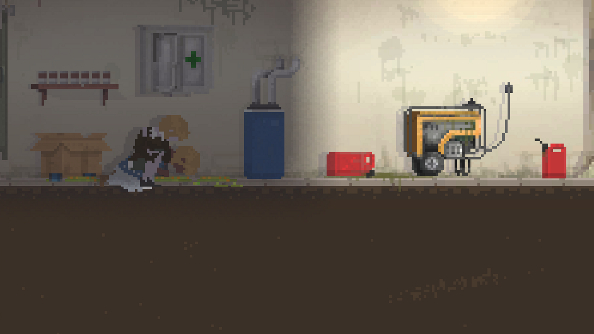 This isn’t the end of the world played for laughs. It’s a Darwinian setting that informs the rest of the game, flinging crisis after crisis at the family, forcing players to make unpleasant decisions. I didn’t make the family eat Dan because it seemed like a fun thing to do. I did it because they had no food, and it had been so long since it had rained that they didn’t have the water required to make an expedition.

If Dan had not become dinner, his whole family would have starved to death.

They survived for a few more days before a broken air filter and food poisoning claimed their lives.

Driving the game is a system of needs. Every character has a meter for health, food, water, hygiene, sleep and stress, and managing them is a full time job. The bunker starts off with a few essentials like a storage box, a generator and an air and water filtration system, but it doesn’t have beds, a shower, a toilet or countless other things that could make it a home. All of those things need to be crafted. 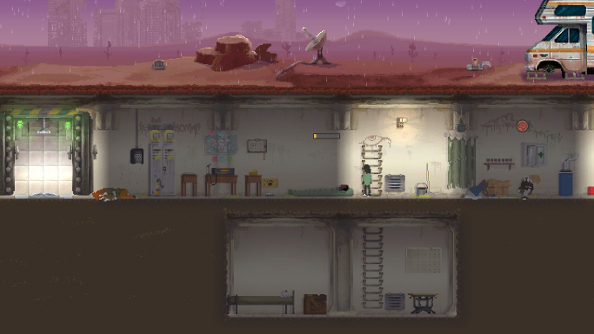 Clicking on the crafting bench brings up a substantial list of objects from snares to capture animals to paint so you can add some cosmetic touches to the rather rundown bunker. New rooms can also be carved out of the rock, and they’re a necessity since the bunker starts out as too small to house more than one bed. Eventually it can be expanded into a multi-level base of operations for a large group of survivors, with colour-coded walls defining what role each floor has, with rooms full of jukeboxes, bookshelves or more comfortable beds and toilets that aren’t just buckets that your family shits in. This requires venturing out into the dangerous world above.

Up to two people can be sent on an expedition, plotted on a map that resides in the bunker. What’s a bit peculiar is that the map is completely useless until you’ve actually started exploring. It shows mountains and forests, but not towns. This means that once you’ve rooted around in the buildings close to the bunker, you have to send your survivors out into the unknown, hoping they’ll come across a building to loot.

It doesn’t make very much sense for a map not to show this vital information, and the random nature of the world means that you can get a bit unlucky and end up wasting a whole lot of precious water – it’s required for showers, cleaning the bunker, drinking and going out on expeditions – by wandering through the wilderness aimlessly. 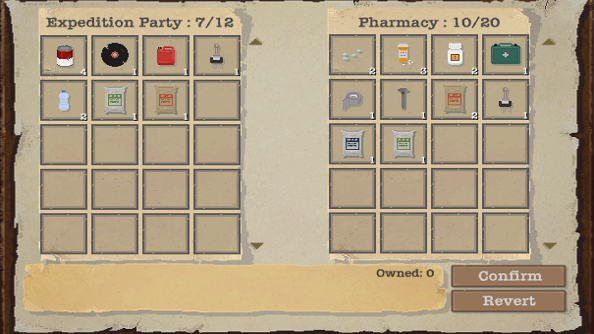 Buildings are represented as inventory screens, and when your survivors meet other people, the exchanges are awkward – there’s little dialogue and what conversations do occur are stilted and random – and sometimes devolve into extremely bare bones turn-based combat. You can flee or attack (to subdue or kill) and that’s it. It might be turn-based but it’s not remotely tactical.

There is, however, a tense risk versus reward loop that hangs over every expedition. Going outside is bloody dangerous. It costs a great deal of water to travel, going out without gas masks (which oddly vanish after one use and then must be crafted) can cause radiation poisoning, and even if luck is on your side and your survivors discover a treasure trove of resources, they only have limited space to bring it back to the bunker.

Initially, I just tried to collect everything. Bit of wire? I’ll have that. Pipe? It’s mine now. Teddy bear? What a score. I wanted it all. I ran out of space quickly. Luckily, storage can be expanded. Crates and shelves can be fashioned, larger bags can be crafted and taken out on expeditions – they all needed more resources though, which drove me to send my survivors out looking for specific objects. Eventually I was compelled to write out a shopping list so I knew what I needed to collect. 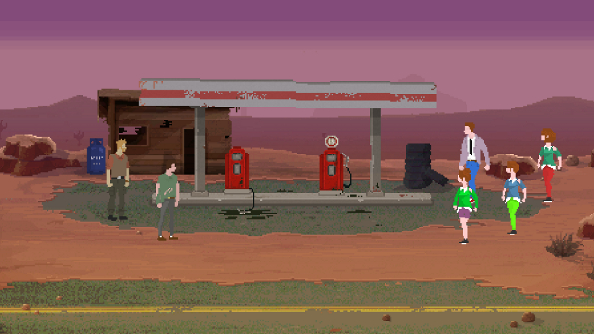 Other survivors that you meet on the road or show up at your door can be invited to live in the bunker, but they are often a drain. When you’re living hand to mouth, you don’t want another hungry wretch to look after. They can be useful as a source of food and labour however…

In one playthrough, I decided to treat survivors outside of the family as mere resources. I’d send them out without gas masks to get supplies, and if they died, that was not a problem. Indeed, sometimes I’d be quite glad when they died of starvation or dehydration because it meant I could feed them to my little hungry family. It’s awful, but I didn’t really care. And that’s a problem.

Comparisons between Sheltered and This War of Mine are inevitable, but what the latter has that this doesn’t, what held it all together, were characters. I cared a great deal about the survivors of This War of Mine because they all had stories and personalities, they helped each other or were sometimes forced to do bad things to good people. Sheltered has none of that at the moment, despite the fact that the original survivors are a family. Right now they barely even acknowledge each other’s existence outside of journal entries. 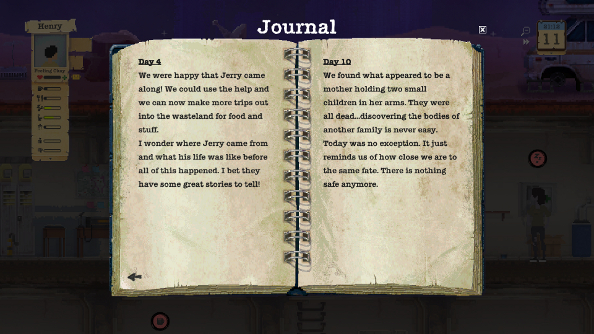 So when some new addition to the group dies, I don’t really have a reaction. If it’s one of the family, I feel bad, but I wonder how much of that is down to the fact that I’m one quarter closer to losing the game. When all four die, that’s it. Game over. The fact that you make the family, choosing their clothes, skin colour, if the family has two dads or mums, it does inspire a bit of empathy, but really they are pixels and stats and not much else. I do still feel a bit guilty about the whole Dan incident though.

Take Tommy, for instance. He’s a bully, a wee lad who presumably likes to tug on his sister’s hair and steal lunch money. So what does he do all day? Well, when his needs are fulfilled, he stands around doing nothing; when they aren’t he attempts to fulfill them by eating or going to the loo and all the things the rest of his family do. There’s no actual bullying. All that “bully” means is that his stats make him a good fighter – it doesn’t inform his relationships with others in the bunker.

Some conversation options and more interaction between the survivors would go a long way to fostering an attachment. That’s not to say I haven’t been working my arse off trying to keep my little band of post-apocalyptic pixels alive for as long as possible, nor is it without reward. Overcoming a bunker-wide sickness, capturing an animal just in time to feed everyone, getting to the point where the bunker has become almost self-sustaining – there are plenty of victories big and small that make the effort and the micromanagement all worthwhile. 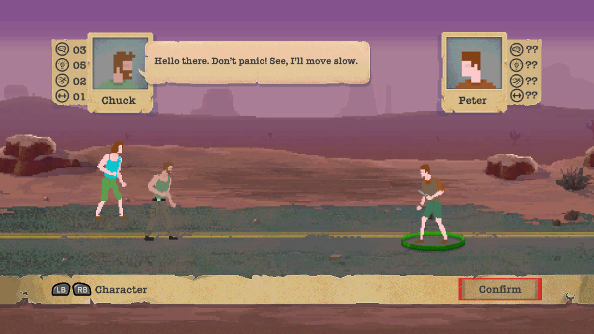 Since Shelter launched last week, it’s already been updated three times, and the improvements have had a pretty big impact. The most welcome one changed how often rain fell, and it’s been a real life saver, literally. As I mentioned before, water is extremely precious, probably the most important resource in the game, and the most common way to get water is by waiting for it to rain. A couple of my families died just because of the weather. Now it rains at least once every four days, and with several water tanks, I’m rarely without the life-giving liquid.

What future updates will include is still very much up in the air. So far, the only planned features are controller support, leaderboards and achievements, and the rest will depend on the feedback Unicube get from the community. That’s great, but it also means there isn’t really a roadmap, and it’s hard to see where Unicube is going to take Sheltered. Building an efficient bunker and sticking it to the apocalypse has proved to be compelling despite the absent narrative, but I’d wait to see what it evolves into before taking the plunge.