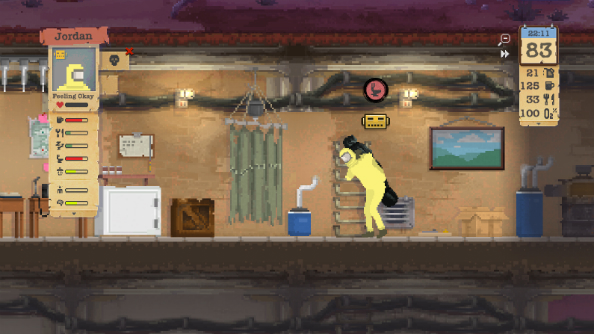 Meet the Freeman family. Jordan and Gordon, the fathers of the family, their children, Tim and Susan, and the family cat, Figaro. When the apocalypse began, this happy unit were fortunate enough to have found themselves in a safe and secure shelter. They had some food and water rations to keep them going for a short while, and a generator to give them light and power the shelter’s vital life support systems.

If it’s more crowd-funded classics you’re after, check out the best indie games on PC.

It’s now day eight and Figaro is dead following a couple of days without food. I task Susan with ‘harvesting’ the beloved feline, leaving her traumatised and shaken. A week later Gordon falls ill from radiation poisoning. He suffers on in agony for a while before eventually dying, cold and alone in a pile of his own vomit – the rest of his family are too busy scavenging or repairing things to notice until the next day.

Not to worry, his body can be put to good use, and at least now there’s one less mouth to feed. 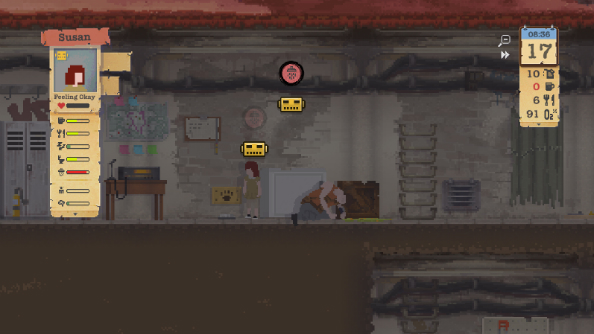 At its core, Sheltered is a management game. Gameplay consists of keeping your family fully stocked with food and water, ensuring their every need is satisfied and above all else, keeping them alive against all the odds. The management mechanics are as solid as the concrete bunker the game’s set within – surviving requires resources, and as you would imagine, resources are particularly scarce after a nuclear holocaust.

Eating and drinking aside, each of your family members also needs to sleep, wash and excrete fairly regularly in order to stave off a daunting variety of ailments. On top of that, you’ll need to keep everything in your shelter fully repaired at all times if you want to keep things running smoothly: water and oxygen filters, beds, freezers, showers, toilets/buckets and generators. As you near the hundred-day mark, you’ll have to begin readying your shelter for direct attacks from outsiders; sometimes they’ll simply try and rob you, other times it’s a matter life and death.

Barely two weeks into post-apocalyptic life and the Freemans are already down a cat and a father. This rather swift decimation doesn’t look to be letting up pace as the family find themselves in the midst of a severe drought, with no water stored in the shelter. It transpires that forethought and stringent rationing are essential in survival, the Freemans are learning, provided they live long enough to see rainfall. Every action has a cost: expeditions require large amounts of water, showering is no different, everyone needs to be fed and the generator requires plenty of fuel. There’s a genuinely affecting hopelessness upon finding your family thirsty and filthy, their shelter about to become their tomb unless the heavens open up. 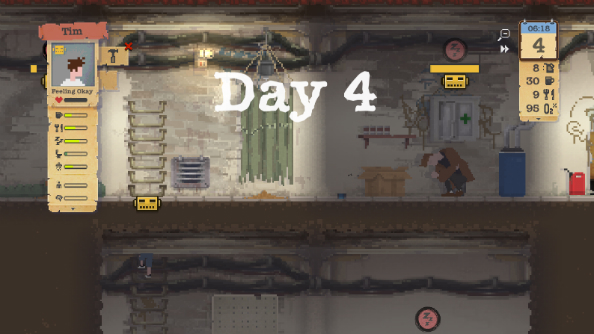 Fortunately, the three remaining Freemans are able to weather this particular storm and live on, all the wiser to the harsh realities of life after armageddon. Improvements follow: more water butts to make the most of any rainfall, traps on the surface to catch passing animals, improved rucksacks to carry more resources back from any excursions. Developers Unicube have provided all the tools to make post-apocalyptic life a breeze. Things are even comfortable enough to set my family members to automated, so now I don’t have to manually see to their every bodily function.

This is where Sheltered becomes sluggish. After you’ve successfully navigated the first in-game month, progression comes to an almost complete halt. Stockpiling enough materials to build anything functional or exciting takes far too long, and in the meantime there’s an agonising amount of micromanagement and clicking to do, which only really serves to keep your shelter ticking over comfortably.

Complacency isn’t punished nearly enough. Between day 20 and day 100 my family suffered only a single death – it was Susan – falling foul simply because I forgot to cure her radiation poisoning. What’s more problematic is that It didn’t bother me, not in the slightest. Susan’s death, unnecessary and totally avoidable as it was, was a mere blip. The ability to take on recruits from outside the shelter meant that I was able to replace the Freeman daughter with a strong and courageous woman named Pamela, who was much more useful on scavenging trips. Like her father and cat, Susan joined an emergency stash of meat that could be relied upon if times got even remotely tough for Jordan and Tim. 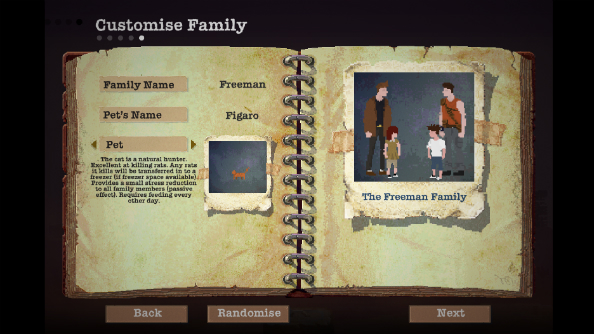 In a game that places a great deal of emphasis on the hardships and trauma of survival, the effects of Susan’s death are short lived. The first death suffered under my leadership acts as a startling reminder that the Freeman family are in dire straights. It’s harrowing, poignant and shocking all at once. By contrast, Susan’s passing, however happenstantial, is frustratingly underwhelming.

There’s an unsettling disparity that emerges between the emotionally compelling game that Sheltered is when I’m playing it badly, and the tedious one presenting itself to me when playing it correctly. The sense of struggle vanishes and the family becomes nominally safe.

Some sense of hardship re-enters as I begin to find my subterranean home under attack from other survivors, or when I stumble into raider-controlled zones while out on expeditions. Again though, the task is overcome after a little practice and soon becomes another nuisance like repairing the water filter or emptying the family bucket. The initial premise of an uncompromising survival management sim becomes a distant memory. The mechanics are still there, functioning as flawlessly as ever, but once they’re mastered they cease to feature in the foreground of the gameplay, and with nothing else to replace them Sheltered becomes monotonous. 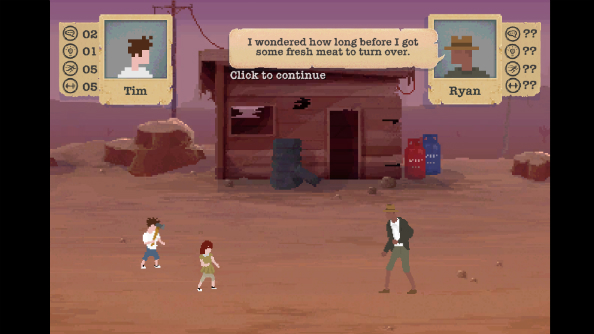 Encounters out in the wastes do little to keep things interesting. Sending your son out to collect materials quickly turns from a high risk necessity into an exercise in inventory management, and no amount of bear attacks or roving gangs manage to spice things up. Turn-based combat is often settled by whoever’s swinging the biggest stick, even to the extent that the victor is never in question when a small boy armed with an axe comes up against an enormous black bear.

This stagnation would be more tolerable were there enough exciting craftables to be focussing on in the meantime, but despite accruing masses of items, most objects are still that little bit too decadent to consider building – until the point comes when you can afford them, but no longer need them.

The updates Unicube have made to Sheltered since its initial Early Access release have pushed the game’s management mechanics to their maximum potential, and taken on that value alone Sheltered could be considered a success. The addition of direct shelter attacks have made total complacency a little harder to achieve while dramatically increasing the threat the outside world poses to your family. Even when you become comfortable at that point, there’s still plenty left to do – get the family RV working so you can take it out on expeditions, fortify your shelter doors, find long-lost family members out in the world – the issue is it takes a little too long to do any of it.

Beyond the meaning you apply to your characters and the struggles you force each one through, there’s only so much love you can ultimately have for them. No tragedy stays with them for longer than a few days, which makes relatively major events forgettable. There’s no character development save for a basic stats levelling system – Tim is now responsible for the deaths of around 14 people and all he has to show for it is a high strength stat. A self-publishing journal does its best to inject some life into your family, but after a few entries it repeats itself and any meaning or reverence it had is squandered. 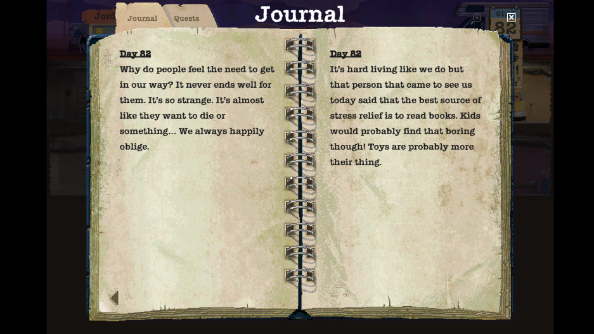 There are no interactions between the characters, no speech, no gestures, no sign that they are a family save for the name in the top corner. After going to all the effort of dressing them up and choosing their attributes when the game starts it’s staggering how quickly they become faceless bots.

Compare Sheltered to titles like This War of Mine and the free-to-play Fallout Shelter and the frailties really begin to show. Despite having a lot of content and a number of systems at play, Sheltered lacks any meaningful sense of progression, particularly where its characters are concerned. The family members of Sheltered are visibly robotic, their drives are entirely mechanical – do I need to poo? Do I need to eat? Am I tired? Even their stress and trauma levels work as if they were basic bodily functions; apparently playing with a toy will effectively extinguish any anxiety experienced after eating the corpse of a loved one.

Sheltered starts strong, but loses ground quickly. For a good length of time it’s a tense and compelling survival management game with plenty of regrettable decisions to make. Sadly, the initial burst of attachment to your created family diminishes, survival becomes a matter of absent-minded maintenance. There are moments to enjoy beyond the hundred-day mark, but the game’s best moments are to be found in its brutal opening, where the Sheltered premise is most intact.