As we reported earlier in the week, Shenmue creator Yu Suzuki said pre-orders for the long-awaited, keenly-anticipated, presumed-vaporous third entry in the series would go live today. It seems they have, along with a couple of new screenshots, which you can browse below.

For more games of the future, check our upcoming PC games list.

Pre-orders are now available at the official Shenmue site. You can get a digital copy for $29, or a physical copy for $60. Suzuki’s company, Ys Net, says the decision to offer pre-orders was in response “to the many requests for a PC version pre-order option”. Shenmue III is crowdfunded, and sales from pre-orders will be channelled back into its stretch goals, adding more content to the game.

After so many years in the vapour and with its release date still a year off, it’s rather extraordinary that Ys Net are confident enough to make pre-orders available, but here we are. Their statement included an update on development, which they say is going well:

“R&D for various game elements is on course as the development team shifts its focus towards production. Main game scenarios are nearing completion, motion capture tests are well underway, and voicing tests with the cast have begun. Yu Suzuki and the production staff are happy to say they are enjoying the work as they continue to diligently make progress on the mini-games, events, and battles.”

Suzuki himself has his nose to the grindstone (and is also working really hard), saying: “I have been absorbed in developing the game and I stay in the studio all night time to time. My life is all about Shenmue day and night.”

The original Shenmue is often cited as the very first open-world city adventure game, coming out almost two years before Grand Theft Auto III. Starring a young kung-fu expert in search of his father’s killer, it delivered a vision of urban Japan with an uncommon level of detail for the time. Features included a day/night cycle, variable weather, NPCs with daily schedules and many mini-games, yet it came out in Japan in the last millennium.

Original story December 13, 2016:It’s been 15 years since Shenmue 2, but it still feels a bit too early for the long-awaited sequel. Despite that, series creator Yu Suzuki says development is in the final stages. In fact, pre-orders are going live in just two days, on December 15.

“Development is entering the final stage headed towards full-scale production,” Suzuki said in a recent issue of Famitsu, via Gematsu. “Early in the new year, I think we’ll be able to show you things such as new videos.

“We will continue progressing with development so that our backers and those who experience the world of Shenmue for the first time can do so with pleasure. Also, at noon on December 15, we will start pre-order sales for the PC version of Shenmue 3, which received a lot of requests.”

Of course, “the final stage” could mean anything. Here’s a simplified workflow chart, via NeoGAF: 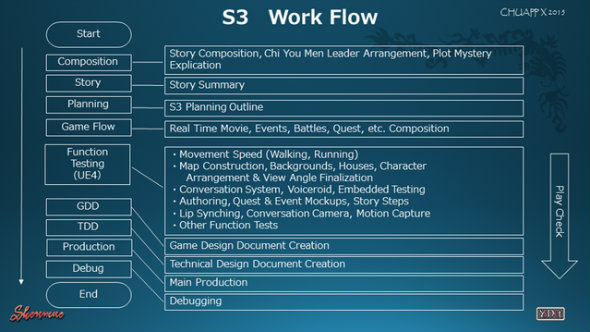 I would assume that the “final stage” would be that entire “play check” arrow, but Suzuki clearly says it’s heading towards full-scale production, which means it’s almost feature complete and it’s just a case of bug fixing, refining and bringing it all together.

We’ll let you know when there are more concrete details.