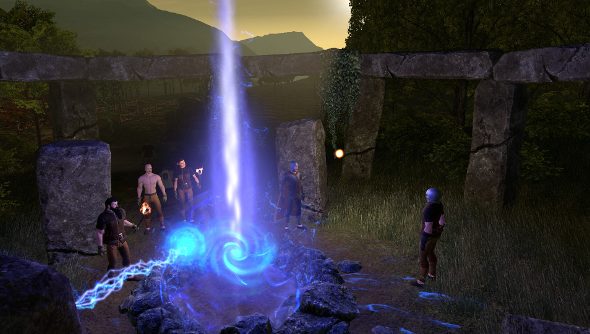 Its launch on Steam coincides with a new update, release 12, which is available to players on Steam today. Its launch on Valve’s platform means that the game will now be running 24/7, apart from planned downtime for maintenance and updates.

So far, the game’s received over $5 million in funding, with over $1 million coming from the Kickstarter campaign.

“We are excited to be pushing the doors wide-open to Shroud of the Avatar,” said Lord British. “When we applied for Early Access for the game, we received our green light in less than three days. In fact Steam players gave the OK with an 86 percent approval rating. What they’ll find is a fantasy RPG that harkens back to my earlier games in the genre, but with modern day technology that combines a single player narrative with an Ultima-like sandbox MMO.”

Here’s what the 12th update adds to the game:

Shroud of the Avatar is currently in pre-alpha, so expect it to be extremely rough, more than just around the edges.

“Shroud of the Avatar is currently in pre-Alpha. This game still needs a LOT of work, and will be under construction for some time,” the Steam page warns. “This means it won’t feel like a finished game to you because some of the features are half-finished or missing entirely, the design hasn’t been balanced, performance hasn’t been optimized, lots of bugs to fix, etc. Joining now means participating in the development, not just playing the game”

The planned single-player offline mode won’t be in the Early Access version either.