I am torn between two reactions to SimCity. On the one hand, my experience last night wasn’t really all that bad. I saw the US servers were slammed, waited 40 minutes to try and get into one while I caught up on emails, and then gave up on the US servers and played on a western European server. I played for about three hours, and while I did have two momentary connection glitches, I was able to get right back to my game without any trouble and no lost progress. On balance, SimCity was only slightly inconvenient and quite nice to play. But what rankles is that it still shouldn’t be anywhere near as inconvenient as it is.

I can’t get over SimCity’s complete indifference to the user’s experience or time. An example: last night when I tried to log onto the west coast US server where most of my friends are building their cities, I was told the server was full and SimCity would try to connect again in 20 minutes.

Let’s pause for a moment and appreciate what’s happening here: SimCity’s response to a full server is not to put you in a proper queue where you can slowly work your way to the front of the line and get a spot on the server, but to freeze you out of that server for 20 minutes at which point it will simply try again and maybe you’ll get lucky. Who knows? SimCity sure as hell doesn’t.

Nor does it care. I mean, consider this awesome passive aggression: when the 20 minute countdown timer reaches zero, the “connect to SimCity button” lights up and you can once again roll the dice to get onto the server. But if you have better things to do than stare at a countdown timer and don’t immediately click that button, THE TIMER STARTS OVER AGAIN. 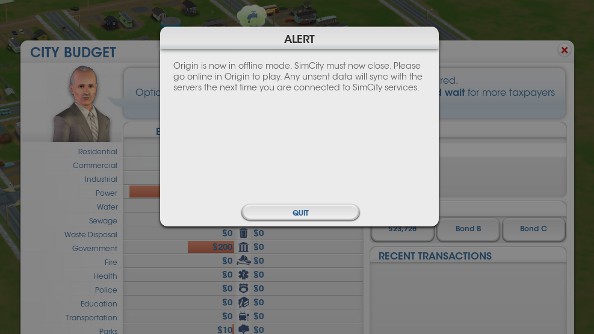 Hang on, I need to go grab some bourbon before I keep talking about this…

Okay, I’m back. EA’s trolling doesn’t stop there, either: I was chatting to IGN’s Dan Stapleton last night and he went to check on the status of some other servers. Well, SimCity does NOT like server promiscuity, apparently, because the simple act of opening the server selection drop-down menu also reset his timer to 20 minutes. After he’d already waited for 16 minutes.

Now I had the option of giving up on the US servers and heading over to the underpopulated European ones, because I had just started playing and didn’t have a city to call home. But for someone like Dan, changing servers means starting fresh with a new city, which means that’s not always the most practical solution. In time, I suspect everyone is going to be keeping cities on every server in the world, just so they can avoid the crowds, but at that point you’re changing how you play the game just to get around EA’s server debacle.

When I finally did reach the sunny shores of Europe West 2, things got really weird. First, I wanted to create a private region where I could just practice my urban planning craft. But when I tried to claim a city on my region setup menu, SimCity told me I couldn’t. I also couldn’t claim a city on any of the public games I saw.

With increasing desperation, I just decided to visit someone’s city. Just so I could look at SimCity, and imagine what it might be like to play it. Once I did that, however, the tutorial activated. I was pulled out of this stranger’s city and brought to the tutorial area. Progress!

Except the interface was dead. The tutorial area had loaded, but I couldn’t interact with it. So I gave up and started diving into public regions at random, trying to claim a city. Eventually, for whatever reason, the game let me. I never did see the tutorial. Which is too bad, because I suspect I could have used its lessons.

So from the time I sat down to play SimCity to the time I actually started playing, about an hour passed. Probably closer to an hour and a half. I’m still not sure how I got into a game, or why I couldn’t start my own region. I have no faith that I ever would have made it onto an American server last night and, given the load they were under, I suspect I would have been kicked in short order. When Europe gets hold of the game, I suspect I will lose access to my city for a few days. 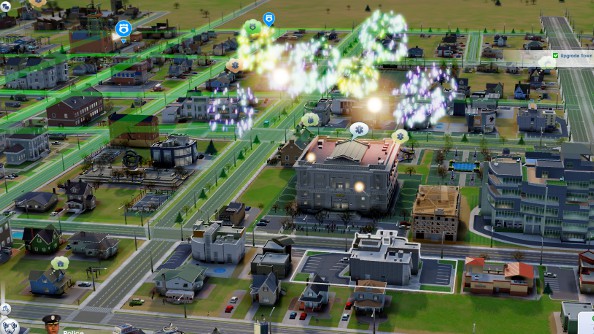 If I had not been trying to get into SimCity for work, I would given up after the second 20-minute countdown failed. I also had the luxury of beating my head against it until midnight, and then playing for a few hours. If you are someone who cannot afford to have copious amounts of time wasted, I strongly suggest you wait on SimCity until the server situation is improved and vastly more consistent. That includes Origin, which is also glitching independently of SimCity. If Origin hiccups, you still get disconnected even if you’re still connected to a SimCity server.

Once I got in, SimCity behaved pretty well. I’ve had far worse connection problems with other games, and a nettlesome hour isn’t really such a big deal. But what bothered me beyond the time spent was just the indifference evident in how connectivity works in SimCity right now.

Things break, things fail, but it’s important that they fail in a reliable fashion. If there’s not a chance in hell of getting a spot on a server, just tell me that, and don’t make me wait 20, 40, or 60 minutes to push a button and hope. If it’s so important that I have a connection to the EA server, then maybe a brief flicker from Origin shouldn’t immediately punt me back to the desktop. I wasted an hour yesterday, I know other people who wasted five or six, encountering all manner of glitches and errors.

All so you can play a pretty good city-builder.

It’s too early to render a final judgment on SimCity, but so far I’m pleased, not amazed. I think part of it is that I just don’t hold SimCity sacred: a lot of other people have made great city-builders, and in the last couple years the Anno series and Tropico have both done a great job of channeling the pleasure and challenge of construction. This isn’t Dishonored, showing up to carry on a tradition that gaming largely abandoned in the last several years. This is the reappearance of a major brand in a genre that already boasts some very creditable contenders. 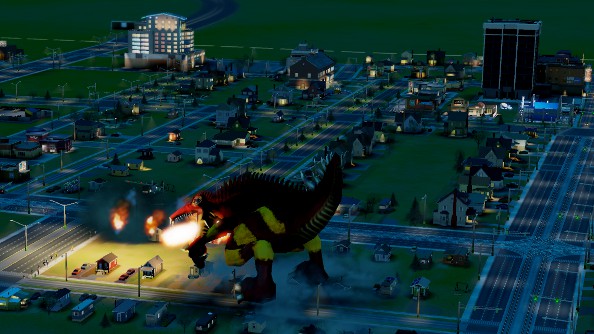 I’m not terribly happy with how road layouts work: it’s way too easy to end up with a zoning nightmare because somewhere along the line you misaligned a road by a few degrees. This is where SimCity’s smaller city size really becomes a headache: once you’ve laid out a few neighborhoods, you’ve consumed a third of your available territory. Need to go and expand the civic infrastructure you put down at the start? Well, you’d better be prepared to bulldoze a ton of lots and have the cash to both deal with the lost tax revenue and build your improvements. And if you want to build a city like LA, comprised of effectively different cities driven by different socio-economic dynamics, you probably don’t have the space. I have yet to shake that claustrophobic feeling that Will Wright talked about with designer Stone Librande.

Theoretically, part of SimCity is supposed to be creating synergies with your neighboring cities, which is also the justification for the whole game existing online instead of locally. I’m not sure if that’s really going to pan out: my region feels very disconnected right now. Everyone is starting from the same low-tech position (coal has become the world’s most precious resource) and it’s not terribly clear yet how I am supposed to interact with my neighbors. So for now, I’m just trying to create industry, a prosperous middle-class housing market, and a booming downtown. If the game is going to be that local, was it too much to ask that it run that way too?

SimCity’s performance is likely to improve with time, just as my own skills and understanding will. I adore its infographic-based approach to displaying map data, and it’s great watching my city grow from a few shotgun houses and strip malls into a wealthy mining town. I even enjoyed watching a giant fire-breathing lizard wreak havoc on an industrial slum, which I took as a sign that it was time to rezone that neighborhood.

But right now I see more promise in SimCity than concrete achievement, and a lot of front-end drawbacks. I’ll be sure to write more as I spend more time as a civil engineer, but for the moment I think I’ll just leave this sign standing by the side of the road to SimCity:

HAZARDOUS CONDITIONS AHEAD. USE CAUTION.