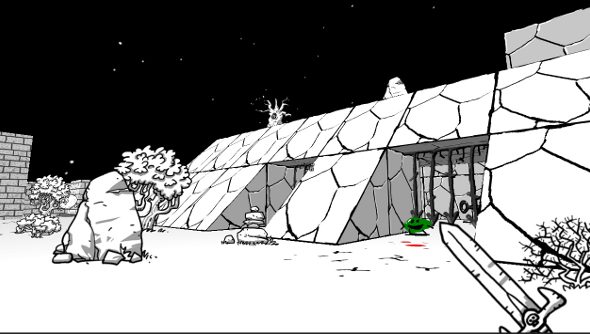 8D Studio, an indie development team lead by the writer and lead designer of S.T.A.L.K.E.R, might be a bit mad, and I wonder if anyone has informed them of that yet. They probably have, because you can’t look at their pitch for Sketch Tales, a sandbox RPG currently on Kickstarter, and not think “Crikey, these guys are biting off quite a lot.”

There’s certainly no dearth of ambition. The game superficially looks like Minecraft, a first-person exploration game in a blocky, cartoon world. But then you add RPG mechanics, realistic physics, AI beasties that live out their lives, building, fighting and procreating, and it starts to look a bit different. Oh yeah, and anything you draw in the game becomes reality.

Players draw their hero to start off with, but can spread their artistic wings and doodle everything from weapons and building materials to the weather itself. Fortresses, traps, magical spells – they can all be sketched and added to the game, and not just for one person, but for anyone playing thanks to content sharing. They can be animated in the in-game editor to boot.

And of course, mod support is planned as well, and the gameworld can be “hacked”, allowing players to change the laws of the universe to create new solutions to problems.

Obviously that sort of power could neuter any challenge the game poses for anyone with even a sliver of imagination, but the sketches require magic scrolls before they can be brought to life, and these can be found hidden all over the world.

On top of the single-player adventure is a multiplayer mode, for both cooperative and competitive outings, and everything found and created in either mode is available in the other.

8D Studio started working on it last year, though a prototype was being developed as far back as 2007, but the developer is running out of funds. $50,000 is what they say they’ll need to finish the game and launch it in the summer, next year.

The Kickstarter will end on January 16th.