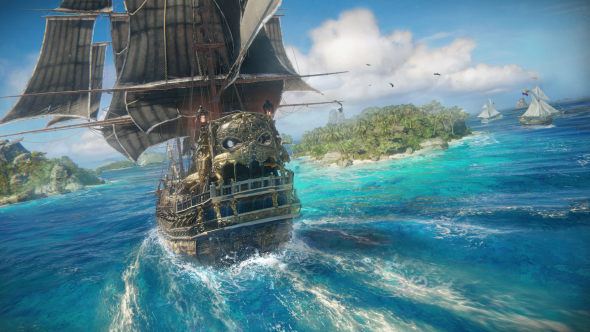 Skull & Bones started from Assassin’s Creed: Black Flag’s naval gameplay, but Ubisoft say they wanted to build that out, delivering more options for wannabe pirates. To do that though, some sacrifices were made – first it giveth, then it taketh away.

Keep an eye on our upcoming PC games list for more ships on the horizon.

In Skull & Bones, you might be a pirate captain, but you’re really just a boat. That impressive water on the Indian Ocean is physically simulated, but you can’t leave the helm and dive into it.

“What we really want to bring in Skull & Bones is the feeling of being a pirate at the helm of the ship, so that’s where we are focusing the experience,” producer Arnaud Vaudour tells us in an E3 interview.

“We want it to feel like the pirate will control his destiny by becoming stronger and stronger, having a better ship, having a ship that you master more and more, and that really represents his own power as a pirate. So that’s really the focus for us.”

No matter how you build your ship out, though, you won’t be wandering around the deck to admire it. Essentially, you’re glued to the helm. You have an avatar, but you are a ship. “At sea anything can happen at anytime,” Vaudour explains, “so you really stay at the helm of your ship.”

Still, at least the ship combat will be as polished and focused as possible.