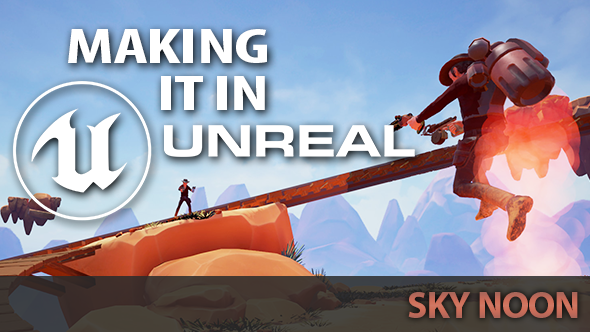 What is it that Overwatch’s McCree says? “It’s Sky Noon,” or something like that, anyway. Far from a terrible pun, Sky Noon is actually a multiplayer shooter made in Unreal Engine 4 in which each player is a gunslinger from the Wild West. The hook? Literally a flipping grappling hook. You see, in Sky Noon, it isn’t the guns that kill you – it is the fall.

Sky Noon began as a school project created by a small team of uni students who call themselves Lunar Rooster. The team has since ballooned it into a full game due to positive fan reactions at events like PAX Australia, where players found themselves hooked (eh? eh?) by its distinct take on the competitive shooter.

In Sky Noon, players do not have health, and so guns are used solely for shunting people of the edge of its maps. These maps exist as floating sky islands – much like BioShock Infinite’s Columbia – so a well-placed shot will sling opponents to their doom. 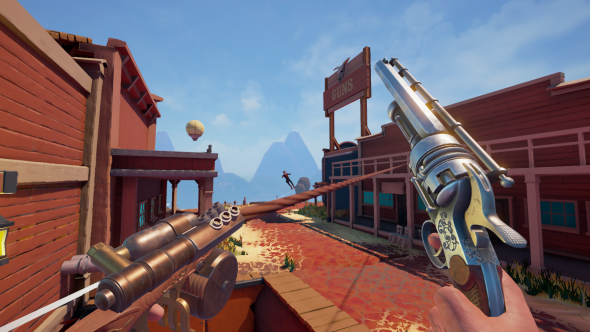 “It’s quite comical to watch players get knocked backwards off maps and stuff,” Sky Noon programmer and designer Craig Taylor explains. “People come up to the booth at PAX and are like, ‘Oh, this is Overwatch, but everyone’s McCree’, or, ‘This is Team Fortress 2 with grappling hooks’. And they would stay for ten seconds and be like ‘Whoa, this is like Smash Brothers, this is different’. Then they’re hooked and they would wait another half hour to play the game.”

Where most shooters give you an advantage for taking the high ground, Sky Noon instead gives players safety when their feet are planted on terra firma, right in the centre of its floating maps. Veteran players of first-person shooters are wired to skulk around the edge of maps, looking for flanking opportunities. Sky Noon asks them to think differently. 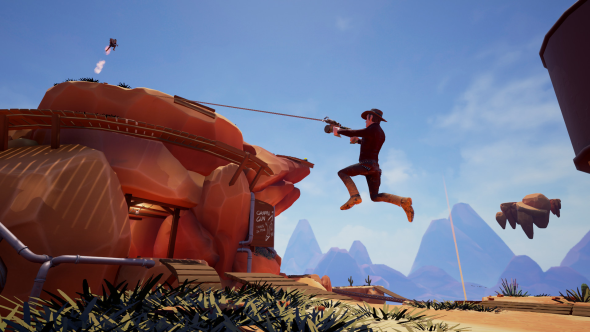 You see, it isn’t just being shunted off the map by gunfire you have to worry about. This is why that Smash Brothers comparison is so apt – advanced players can chain moves together, shoulder-barging an enemy into the air and blasting them over an edge before they can even think about using their grappling hook to recover.

As well as the ability to push, nudging players to their death with shots and shoulder barges, the developers wanted to add the option to pull as well, though it was not easy to implement.

“The lasso used to be an ability called the pull hook, and it would be a random chance of you getting that ability,” Taylor recalls. “It was situational at best. We threw it out, code and everything. It didn’t work very well with networking anyway.”

After experimenting without the pull hook, however, it felt like something was missing. “We decided to bring it back, but have it always available,” Taylor says. “So we made the lasso.”

Originally, this move would not only pull players towards you, it would also stun them, taking their control away. “Stunning in Sky Noon is not fun in the slightest, so we ditched that,” Taylor laughs. “There’s nothing worse than an FPS game where you can’t do anything. We ditched that in favour for a quick impulse towards you. Essentially, it’s a whip.” 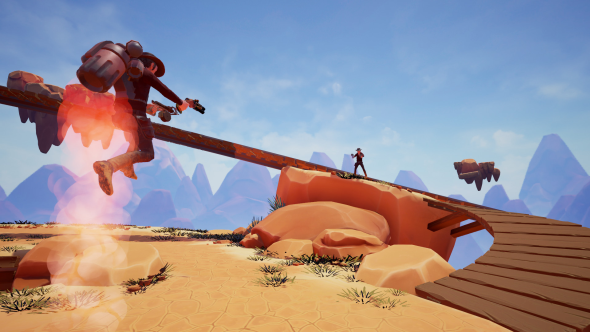 The pushing and pulling works on a flat numerical value applied to each ability or weapon. The shotgun fires in a cone and applies more force the closer an enemy is. The machine pistol stacks smaller impulses, adding velocity with each shot landed. With explosives, the closer you are to the point of detonation, the faster the velocity. The entire development process was iterative, the team testing and poking until they settled on what works best.

Even initial development was a learning process. Taylor knew Unreal Engine 4 well, but the rest of the team were learning on the job. Of course, this being an online shooter, they all had to get to grips with networking solutions. 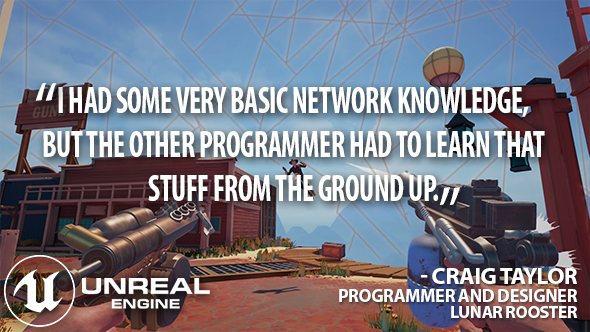 “Using a network game, it’s a good job we did end up working in Unreal because the base networking in Unreal is fantastic,” Taylor says. “It helped us really early on to get a prototype ready. I had some very basic network knowledge, but the other programmer had to learn that stuff from the ground up.”

Despite being fresh out of university, Unreal 4 helped this small team of developers exceed their expectations. Bolstered by feedback from attending trade shows, they are now slowly shunting themselves towards a finished project.

You can read more about Sky Noon on the Lunar Rooster website. Unreal Engine 4 is now free.

In this sponsored series, we’re looking at how game developers are taking advantage of Unreal Engine 4 to create a new generation of PC games. With thanks to Epic Games and Lunar Rooster.