It looks like Skyforge’s latest big update, Aelion’s call, won’t just bring massive bugs (insects, not issues), knights with chainguns and a new raid. Alien invasions will be a constant threat to the way of life on Aelion.

Mechanoid forces have begun touching down across the planet, and you need to get in there and show them you won’t be putting up with any alien on Aelion.

But who is the real alien? Man, that’s deep.

“We’ve received the Celestial Fortresses warning’s and the Mechanoids have begun touching down across Aelion,” says the official site. “Through these unfeeling AI, Aelion has made great strides in technological advancement.

“Despite this, they are not our allies and the valuable data their hollow metal shells provide comes at a cost. Defeat is not an option that we can afford for both the safety of Aelion and the potential mysteries that can be unraveled through the study of these mechanical monstrosities.” 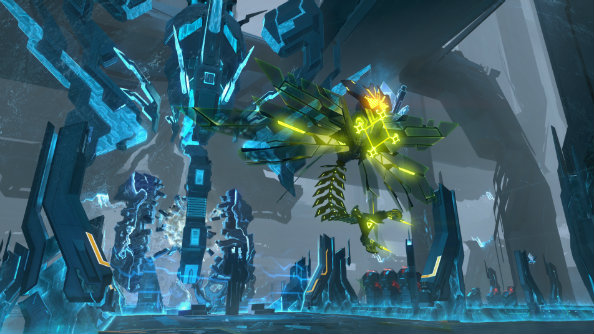 The robot invasion also brings with it new stuff in the form of Invasion Atlases and Operations. When an invasion is active, even low level players can participate in adventures with representatives of that invading army, earning Tokens in the process. Collection of these tokens will incrementally net you Sparks dedicated to that faction’s atlas, granting bonuses while fighting members of that force, general stat improvements, and new Symbols.

When you receive Tokens, you will be placed into an Operation group made up of a maximum of 40 players. Once that’s happened you can access any information about your current Operation on the Aelinet in-game, or through your browser.

“Here, you work together to complete the Operations goal, your personal assignment, but you’re also in a competition to lead with the highest amount of Tokens for the greatest rewards,” it continues. “Each day the Operation will move to the next tier, and only the top players in each tier are moved onto the next – the higher the tier, the greater the rewards! We will go more in detail on these new additions in the future.”