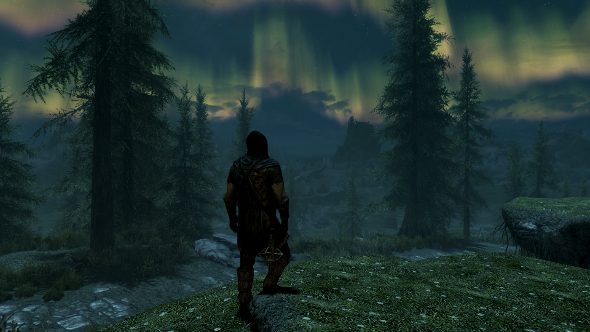 With The Elder Scrolls V: Skyrim’s fifth anniversary imminent, Bethesda have seen fit to give their gargantuan RPG a bit of a makeover, gifting the Skyrim Special Edition to anyone who already owns the original and all its DLC. It’s been buffed with remastered effects, depth of field, volumetric god rays and a host of other modern bells and whistles.

Here are the 100 best Skyrim mods that we pray make it over to Skyrim Special Edition.

The improvements are most dramatic on consoles, which get mods for the first time and the most significant visual upgrade, but on PC we’ve been using mods to transform the game since its launch. Hopefully, a lot of these mods will eventually be reworked for this new version, but until then, it’s almost competing with a game that’s had five years of mod support and evolution.

It’s impossible not to take mods into account, since they are such an integral part of the PC version, so as well as comparing Skyrim Special Edition to the vanilla game, both visually and in terms of performance, I’ll be comparing it to a version loaded with graphics mods (I’ll link the most significant ones). 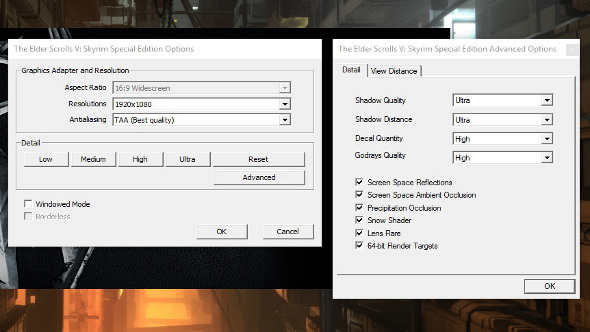 The graphics options screen is once again only available from the launcher, though there’s now a god rays option, along with options for snow shader, lens flare and 64-bit render targets, rendering things like colours, textures and the aforementioned god rays in 64-bit rather than 32-bit. The view distance tab, which lets you fiddle with the view distance for specific elements, like grass, NPCs, objects and so on, also returns.

Unfortunately, some of Skyrim’s old issues return in this new package, notably the 60fps lock. Like the original game, you’ll need to delve into the SkyrimPrefs.ini file found in your documents folder and switch off vsync. That doesn’t really solve much of course. Sure, you get a better frame rate, but chances are your eyes will also call it a day after dealing with all the screen-tearing and physics bugs. Yeah, they’ve returned too. 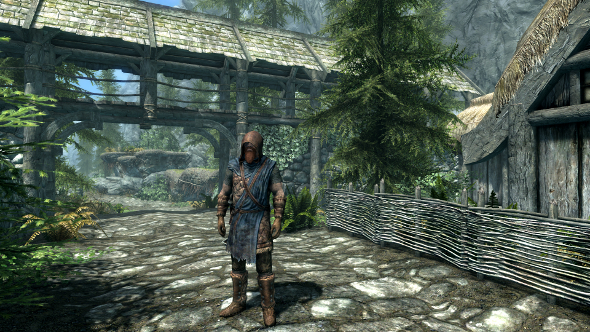 On Skyrim’s highest settings, it definitely looks improved. You will undoubtedly see people, particularly on the Steam forums, ranting and raving about how it’s barely changed at all, but as you’ll see from comparison screenshots later on, this is absolute nonsense. There are countless tweaks, and a few minor outright changes. They aren’t massive, however.

Performance is mostly steady at 60fps on my GTX 970. Without vsync, it goes over 80, but I can’t stomach the screen tearing for more than a minute. 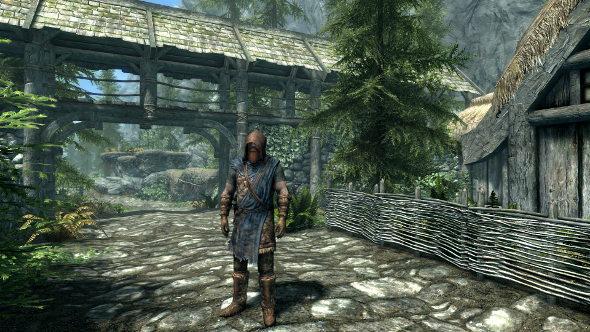 At the high preset, there’s hardly any noticeable difference to the ultra preset at all. Shadows are a wee bit smaller and some fog effects are reduced, but spotting them is like playing a game of Where’s Wally (Waldo for our American cousins). Except, you know… not as easy. 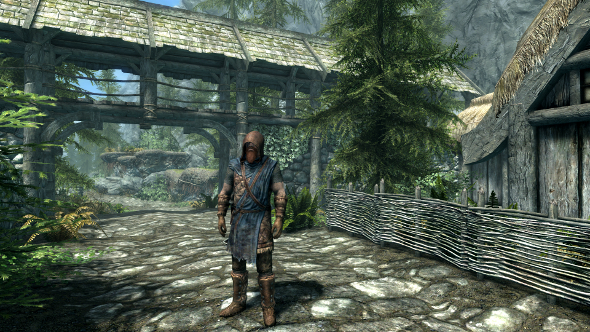 Once again, not a whole lot has changed. The medium preset looks a lot like the high preset, but with another slight reduction in shadows. Distant objects are more faded as well, but it’s a subtle difference. 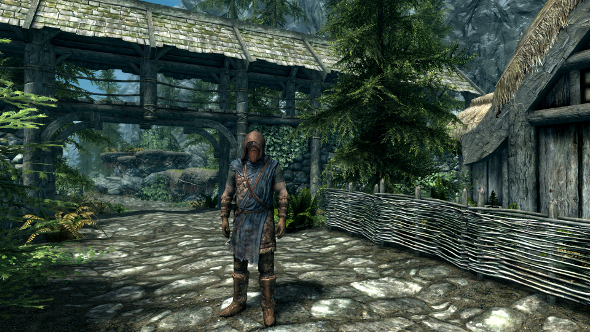 With the low preset, the most significant change is the switch from TXAA to FXAA, and frankly it’s a welcome one. TXAA washes the game out and strips the life out of it. You don’t need to use the low preset to get rid of TXAA though; you can just change it from the launcher but otherwise keep everything else on ultra. 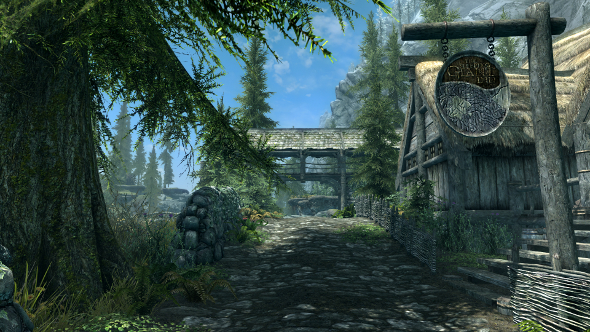 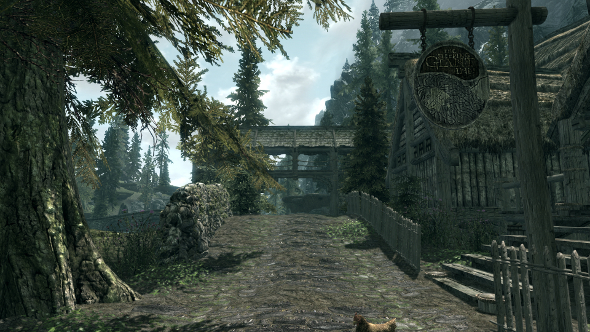 The gate out of Riverwood is etched in my memory forever, since this is where I often found myself testing out hundreds of different mods, from HD texture packs to flora overhauls. I thought I’d return to compare Skyrim Special Edition with its predecessor, and the upgrade is pretty clear.

Skyrim Special Edition is brighter, with richer foliage and a broader range of colours. Some textures are also significantly improved, most visible in the road and the left wall. While most of the improvements are in the realm of visual fidelity, there have been some changes that go beyond it. The fence on the right, for instance, is no longer a picket fence, and is instead woven. 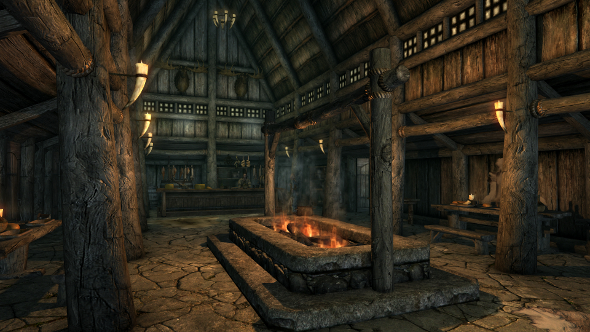 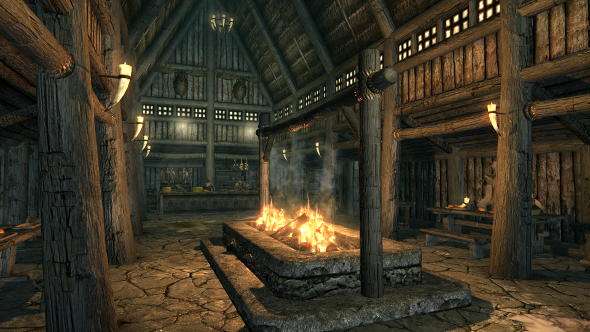 I’m less sure about some of the interiors. Here in The Sleeping Giant Inn, you can see that the fire is smaller and generally less impressive in the Special Edition, while the wood texture changes seem less like an improvement and more of a change in style. 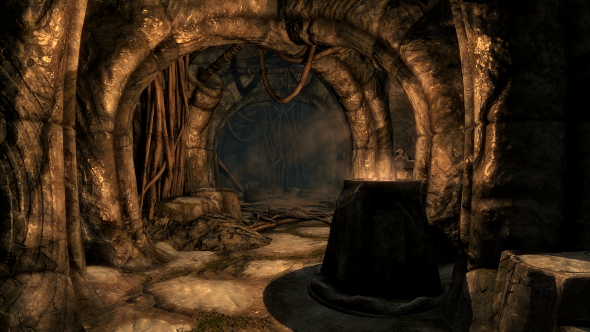 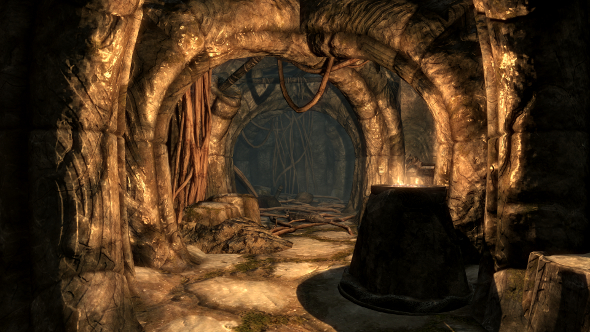 Aside from better lighting and a few more smoke and mist effects, the dungeons are similarly disappointing, stuck with the same textures and light sources that act as unnaturally as the original. Speaking of dodgy lighting, while exterior scenes by and large improve on the original’s lighting, the god rays are a little odd. I noticed that the shafts of light rarely have anything to do with the position of the sun or moons, and tend to just appear in random places. 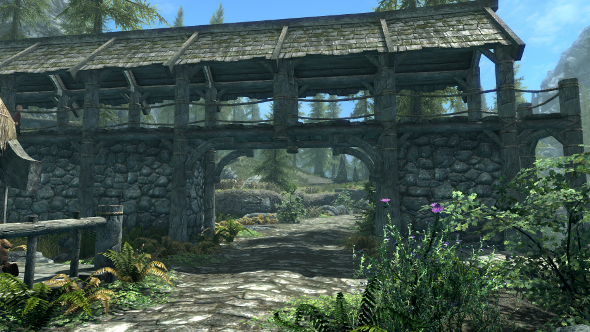 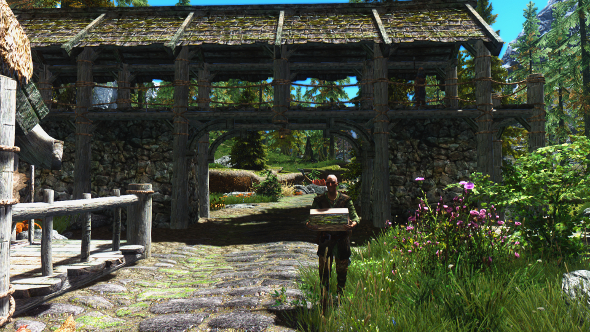 We return to the gate out of Riverwood, but this time the one that leads to Helgen, and things aren’t looking great for Skyrim Special Edition. Despite the enhancements, it struggles to compete with its modded predecessor. There’s significantly more grass, higher texture stone, and the gate’s roof is substantially more detailed. This screenshot was taken while I was only using a modest number of mods, the highlights being Enhanced Light & FX, Realistic Water, Bigger Trees, Flora Overhaul, Vivid Landscapes and an unofficial HD texture pack.

The unrealistic vibrancy is thanks to the ENB preset I’m using. I love how colourful and saturated it makes everything look, enhancing the fantastical setting, but it might be a bit too much for some. Thankfully, there are plenty of realistic presets too. The only downside is that while Skyrim Special Edition runs at 60fps, my modded version of the original bounces between 40 and 50fps. 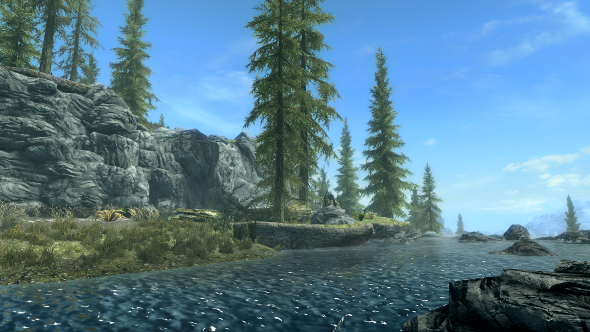 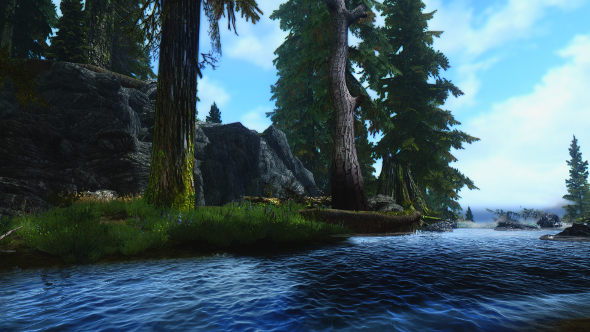 These screenshots do a good job of showing how much better the water and flora look in the modded version. It’s been so long since I played the game without mods, that I forgot how flat and lifeless it could sometimes look. The flora, tree and water mods are absolute musts, and out of all my favourite mods, they might be the ones – at least out of the visual mods – that I can’t live without. They utterly transform the forests of Skyrim, filling them with atmosphere and greenery.

And I should emphasise: Skyrim can look a hell of a lot better than it does in my screenshots. With a suitable rig, or at least an ability to stomach gaming at 30fps, it can look almost photorealistic.

On consoles, Skyrim Special Edition is the only alternative to someone who wants a spruced up version of the game, and the addition of mods is obviously fantastic. But on PC, nobody has been playing vanilla Skyrim since a week after launch. We’ve had five years of improvements from a diligent and talented community of modders, and unfortunately Bethesda have not really attempted to build on that. They didn’t even add footprints being left in the snow, which Skyrim has had for half a decade thanks to this footprints mod. And beyond the game’s appearance, nothing else has changed. Same terrible UI, same broken followers, and a lot of the same bugs.

Thanks to countless guides, including our 100 best Skyrim mods article, and Steam Workshop support, it’s a doddle to make vanilla Skyrim look incredible, and until a lot of these mods get retooled for Skyrim Special Edition, there simply isn’t any reason to make the jump over. You’d lose more than just eye-candy, like all those quality of life improvements. I for one can’t live without SkyUI, which dramatically improves inventory management, something Bethesda didn’t do for the Special Edition.