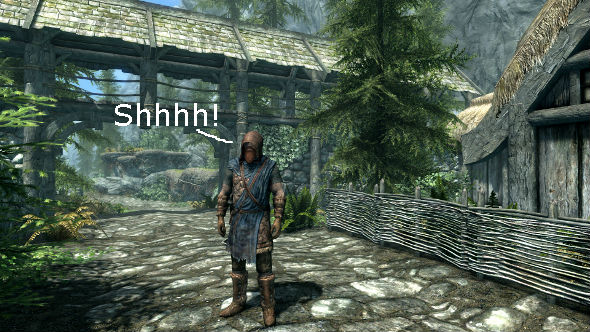 Why play Skyrim: Special Edition? It’s yet another investment of time and money in a busy year for games. You’ve played it before. And yet, you’re looking for an excuse. Well, we’ve got one: stealth playthrough.

Skyrim was sold on a lot of bombast – a bearded bloke yelling three-syllable gobbledegook at a dragon. There’s nothing subtle or stealthy about that. But to explore Skyrim from the shadows is to creep, awakened, through the same manors and ruins you once ran through blindly; to become cognizant of the game’s modular architectural wonders and best-in-class environmental storytelling.

It’s a reason to stare for minutes on end at the Special Edition’s fancy new wall textures, while you wait breathlessly for a wary patrol to pass.

Bethesda’s stealth mechanics came together in the most recent Elder Scrolls in a way they hadn’t before. Skyrim leaned heavily on the lessons of Fallout 3, directed by Thief II and Dark Brotherhood veteran Emil Pagliarulo, which relied on a three-stage behaviour system for NPCs. Characters were no longer simply unaware or attacking: they were suspicious; they searched. They weren’t a patch on Metal Gear Solid’s guards, but they at least created the potential for tension and release. The stuff that drives great stealth games.

Pagliarulo was working on other things while Skyrim was in production – namely inventing the dragon language from scratch – but his systems came into their own in the maximalist Elder Scrolls setting. Its hodge-podge of spells, shouts and household objects turned out to be the perfect toolkit for a master thief – if only you knew where to look.

That’s where we come in. We’ll cover the essential elements of stealth and show you how to shape Skyrim into a sneaky good time. 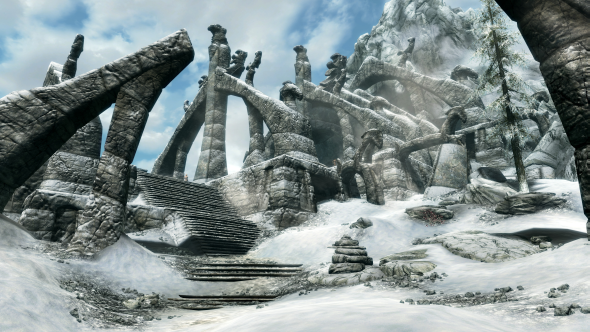 While most of Skyrim’s dragon shouts tend towards the booming, Brian Blessed end of the Viking magic spectrum, there’s actually one specifically geared towards stealth. Throw Voice is a sort of dragon whisper that bounces noise off distant walls. It’s perfect for pulling guards out of their patrol paths – a necessity, since even in dungeons designed for action you’ll find they each have their own routes to cover.

Shouts aren’t easy to come by in the early hours of the game, however, so you’ll want to hear about the budget option. Like all Bethesda games, Skyrim is a simulation, so literally any object that makes a sound becomes a potential distraction tool. Welcome the humble bow. Bounce an arrow off an archway behind a guard’s head and he’ll forget all about you clattering clumsily down the hall a moment earlier.

This is hugely important – because while you can happily sneak your way through half a Dwemer ruin, it’s not much fun if the whole thing turns into a bloodbath the first time you slip up and get spotted.

Calm is an apprentice-level Illusion spell you can find in all good spell stores, and is basically a fast-acting chill pill you can apply directly to enemies you’d rather didn’t give your position away. They’re pacified for 30 seconds, which is easily long enough to tiptoe anywhere else and wait out the ensuing upset. Beware, though: higher level enemies won’t be so easily calmed.

There’s an equivalent shout, Kyne’s Peace, but it only works on animals. And since animals tend not to patrol houses and citadels, we figure it’s less frequently useful. 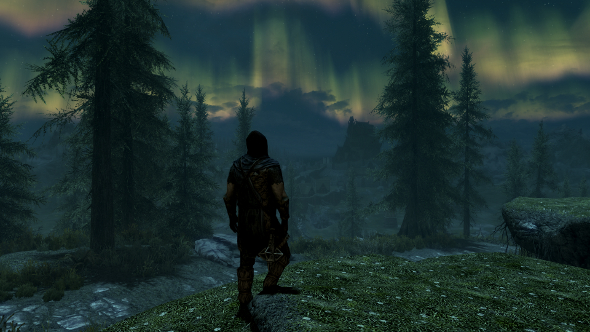 Ironically, the second most useful trick in a thief’s spellbook is more-or-less Calm’s opposite. Frenzy drives NPCs within its range to start hacking away at each other, until either the effects wear off or they turn each other into ragdolls.

Occasionally, Skyrim’s dungeons feel imperfectly designed for stealth, and you’ll want to clear a busy room before getting to work. Frenzy will handle that for you – and if it doesn’t finish your enemies off, it’ll at least keep them occupied while you slip by.

If there’s one persistent frustration in Skyrim’s stealth systems, it’s that your visibility level is always changing. In a Thief or Dishonored, your ability to stay unseen in affected by light, line of sight or movement in any given moment. And while all of those factors are folded into Skyrim’s maths too, it also takes account of your current sneak skill.

Since this is an Elder Scrolls game, your sneak skill improves incrementally with use. Inevitably, that creates a reverse challenge curve. Stealth is most entertaining once you’re half decent at it, but winds up a less interesting challenge once you become a basically-invisible theft-phantom with footsteps set to mute.

If you’re really keen on maintaining the sweet spot of a good stealth game – that perfect balance of vulnerability and power – you can always introduce your own handicap. A choice piece of heavy armour should do it. 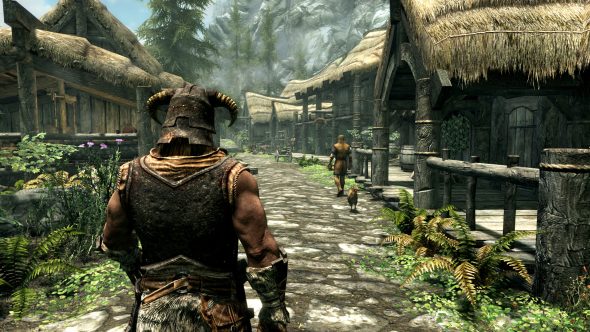 We’ve not said much about weapons yet, and there’s a reason for that: once you’re comfortably equipped with stealth paraphernalia, it becomes perfectly possible to play a lot – a lot – of Skyrim non-lethally.

That seems fitting, since the dark heart of Skyrim’s stealth isn’t found in the Dark Brotherhood, as it was in Oblivion. The best sneaking opportunities are found instead in Riften, with the Thieves Guild.

The Guild hide out in the city’s subterranean Ratway, and follow a strict pacifist code. Their quests will have you burning beehives, pickpocketing keys and infiltrating homes, but never ask you to go mano a mano with your opponents. Later missions get a bit bogged down in the Guild’s double and triple-crossings – but Riften is otherwise a fine place to focus your newfound sneaking abilities.

If your last stealth experience in an Elder Scrolls game was Oblivion, where the height of thievery involved slowly lowering a bucket over a shopkeeper’s head so that he couldn’t see you swipe his produce, you owe it to yourself to play Skyrim a different way. Trust us on this. Thief’s honour.

Got your own techniques for getting by unseen in Skyrim? Surreptitiously share them in the comments.