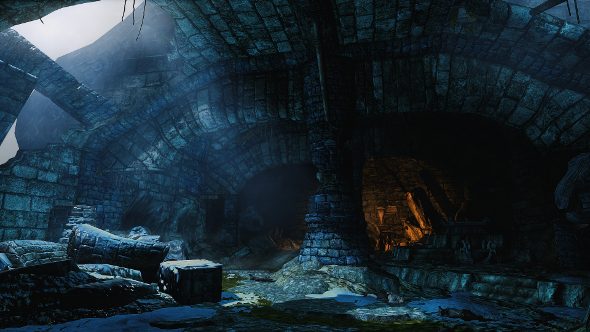 When Skyrim Special Edition launched last year, it struggled to justify its existence. Sure, on consoles it was a significant upgrade, not least because of the introduction of mods, but on PC it was a disappointment. The visual enhancements were nothing compared to what modders had been cranking out for years, and absent of any new features or quests, there weren’t many reasons to upgrade.

Prefer the vanilla game? Try these Skyrim mods instead.

It was still a very good game, of course, but it was also competing with a version of itself that was bursting at the seams with graphics mods, weapons, quests and a long string of tweaks, all developed by a huge community of diligent modders. It never stood a chance. However! That was over two months ago, and many of these creators have now migrated over to the new version.

Is it worth another look? It just might be. 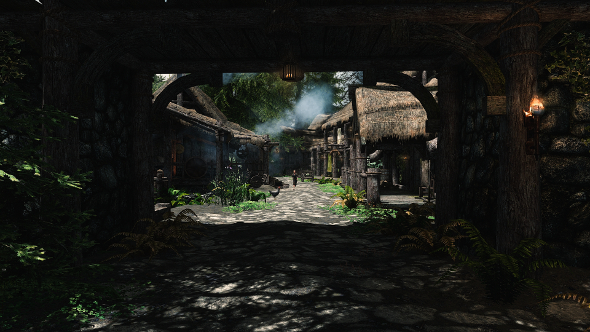 Far too much of my time has been spent cramming mods into Elder Scrolls games. I won’t even try to calculate it in hours or days because I’d undoubtedly go mad and wonder what I’d done with my life. But I’ve been at it again, obsessively going through Skyrim Nexus and Skyrim Special Edition Nexus, tweaking load orders and hunting down mods conflicts. It’s impressive, though not surprising, how vast the list of Special Edition mods has become in such a short time.

Looking at my mod list, I’ve had no problem with finding just about every kind of upgrade and addition I could think of, from small things like footprints to significant overhauls that fiddle with every texture. At launch, Skyrim Special Edition already had a fair few mods, but it was missing important ones that have become as close to standard as a mod can get. 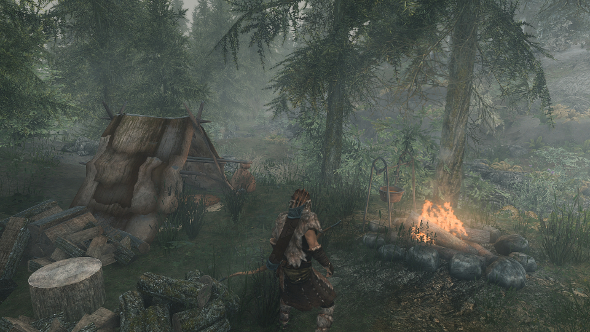 The first thing everyone planning a new character in Skyrim needs is the Alternate Start mod, and thankfully that’s been available for the Special Edition just after launch. Not only does it let you skip the Helgen intro, where you’re on your way to greet the executioner’s axe when a dragon appears and causes a ruckus, it lets you choose from a plethora of new origins. You can begin as a member of any of the guilds, a hunter camping out in the forest, a shipwreck survivor, or even a vampire or the thrall of a naughty warlock.

Conveniently, Alternate Start also gives you a quest to go and check out what’s going on in Helgen, letting you start the main quest at your leisure. But feel free to put it off – there’s plenty that you can do before then.

A new life is great and all, but it can start to feel a little stale when everything else in Skyrim is pretty much the same as it was over five years ago, with the same quests, NPCs and areas that you’ve possibly seen a dozen times before. Thank goodness, then, that mod creators have started to port over Skyrim’s best mods, the ones that leave a dramatic mark on the game. 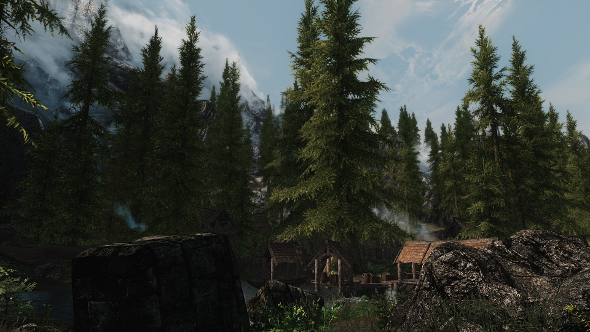 Back when I was doing the port review, I bemoaned the absence of two of my favourite mods: Skyrim Flora Overhaul and Bigger Trees. Since the nation of Skyrim is largely forest and wilderness, this pair of mods made some of the most noticeable changes, introducing new flora, jacking up their texture quality and increasing their size. This left entire areas barely recognisable and, more importantly, gorgeous. They were the first mods I looked for when I fired Skyrim up again, and this time I was in luck. Indeed, there are several flora mods available, some of which can be mixed and matched so you can create the perfect environment to hunt deer or stalk more dangerous prey.

Skyrim Flora Overhaul SE can reduce performance a little, depending on your rig, and there are LOD issues when paired with Simply Bigger Trees. It might not matter to you, but if it does, there are other options. Honestly, though, just increasing the size of these intimidating pines can have a huge visual impact on the game.

Decent water mods were also notable for their omission, but that’s another hole that’s been plugged. Realistic Water Two is what I’ve been using, fixing water current issues introduced in the Special Edition while also giving its rivers, lakes and oceans a facelift, making them look good enough to guzzle for hours. Combine all of these nature mods and you end up with something that blows the vanilla Special Edition out of the water. Before you settle on any of them, however, it’s worth testing different texture resolutions. Most come with 4K, 2K and 1K options, and the difference isn’t always worth the performance hit. 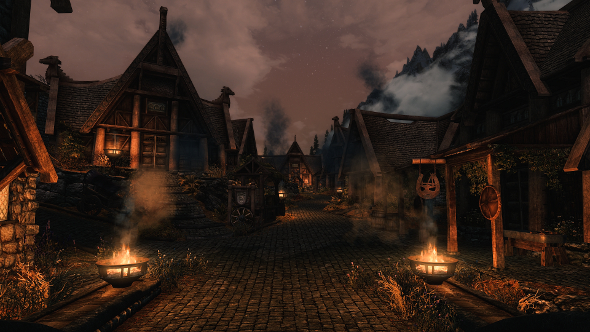 Playing god with the natural world is a lark, but there are plenty of man-made areas and folk residing in them that are begging to be fixed up, too. Mods that introduce new areas and reapply cut content were already available for the Special Edition back in October, but there weren’t so many choices that you could properly tailor the world to your exact specifications. That’s less of a problem now.

Everything from NPC AI to the quality of the wood used in the construction of farmhouses has been fiddled with, entirely reinventing areas and characters. Texture packs for roads and walls, new hairstyles, behaviour mods – there’s barely anything that doesn’t have a something promising to improve it. If you’re hot for scales, here’s one to improve the sex appeal of Argonian blokes. Ever wanted to murder someone with a cabbage? There’s a mod for that too. 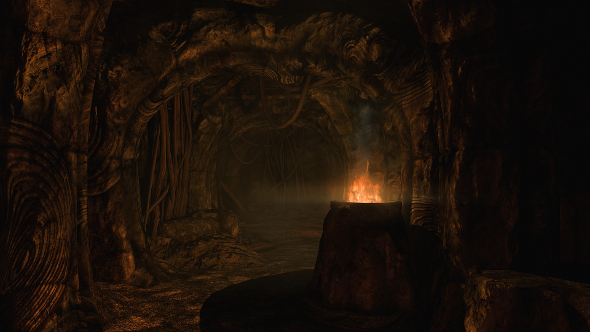 Chucking in 200 texture mods can do wonders, but to really make Skyrim shine you need some lighting and atmosphere mods. Vivid Weathers or Climates of Tamriel SE are a must, adding countless new weather effects and lighting changes that elevate the game from its slightly drab beginnings. Mods like ELFX are more than worth downloading as well, fixing light sources while giving dungeons and interiors in particular a more appropriate mood. While these are great mods, they work best when paired with an ENB preset, something that was lacking last year.

ENB presets can do a multitude of things from subtle colour changes to enhancing bloom, depth of field and post-processing. Though they can stand alone, they are typically designed to be used in tandem with weather and lighting mods, and tend to have specific versions suited to your preference. My personal favourite is SkyrimSE Re-Engaged ENB. It started out as a reshade mod that lavished improvements on the game while running into some issues, like the DoF affecting UI elements, but that has since been fixed and you can now choose between the ENB and reshade variants.

Importantly, these mods are all highly customisable. I tend to crank up the saturation for a more fantastical feel, but you can make Skyrim as dark and gloomy or as bright and colourful as you like. It’s possible to make some tweaks in-game – Vivid weathers has an in-game book that lets you mess with some elements, while ENBs let you bring up a menu by hitting shift+enter – but you have greater control if you are confident enough to edit .ini files. It’s worth remembering, as well, that there’s a performance cost, but it’s largely outweighed by the visual improvements.

Here’s the thing, though: none of this is actually new. These are either old mods ported to the Special Edition, or new ones that are trying to do exactly what their predecessors did. Sure, I was pleased to finally be able to use Immersive Armors, greatly expanding the fashionable attire I could drape over my burly Nord, but over in regular Skyrim, I’ve been using that for years. At best, the Special Edition is, for anyone using mods, almost as good as the original.

See, there are still things missing. Without a new version of the Skyrim Script Extender, some of the more complex mods remain trapped in the old game, most notably the phenomenal SkyUI, an interface mod that overhauls Bethesda’s messy menus. It is absolutely one of the best Skyrim mods, because it not only makes the UI convenient and user-friendly, it also adds functionality to other mods. Lamentably, though the Skyrim Script Extender is due out this March, SkyUI won’t be making its way over. The creators have no plans to update it. 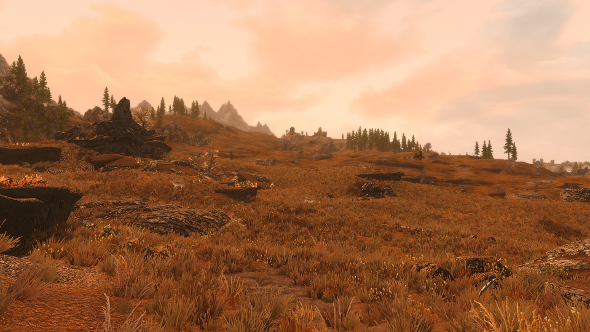 There are other UI mods, like SkyHUD, which is both handy and customisable, and well worth downloading, but it’s still very much a work-in-progress, and doesn’t change the multitude of problems with the game’s inventory system. As its name suggests, it’s focussed exclusively on the HUD, letting you tweak and hide elements to create a more immersive experience.

When we compare the two versions of the game, both modded, side by side, original Skyrim is still superior – though now only by a small margin, compared to the vast gulf last year. The one trick the Special Edition still has up its sleeve, however, is that it is 64-bit rather than 32-bit. Ostensibly, that means a more stable game, as well as allowing players to essentially run as many scripts as their rig can handle, rather than being hampered by the RAM limit that came with the 32-bit version. Bigger and more complex mods should also be possible.

I honestly can’t say I’ve seen the benefits, though. Stability is the same as it ever was, meaning that it’s a bit of a crapshoot, and few mods seem to be taking advantage of it. We’ll likely need to wait for the 64-bit script extender to come out before we really see it being used to its full advantage.

Of course, if you don’t already own Skyrim, then the Special Edition is definitely the one to get. It’s a bit more expensive, and it has fewer mods, but the situation is improving every month. The future is simply brighter with the newer version. I’ve just created a sneaky Bosmer werewolf fellow, and I’m going to keep playing rather than diving back into the original game. That’s something I wouldn’t have said back in October.