Insomniac, like their PlayStation running mates Naughty Dog, have always been a studio PC gamers have watched wistfully from afar. Playful, clever, and with a wealth of knowledge about how to make running around enjoyable, we knew they were too closely tied to one platform to embrace Steam.

But things have changed. While the only way the Naughty Dog ethos will reach us is through the work of Amy Hennig at Visceral, Insomniac are prepping a bona fide PC game about a bovine who “just wants to make beautiful art”.

Esteban is a bull and, we’re told, an overachiever. Like many artists, the more you try to control him, the more upset he gets. Success is a matter of steering him through top-down levels to collect decorations using as little input as possible in order to avoid a rampage.

It’s a little game that’s grown from an experiment not unlike the one that yielded Ubisoft Reflections’ excellent Grow Home. Insomniac designer Lisa Brown had been building unusual mechanics in her scripting work that didn’t fit the studio’s work on their big console projects – so was given a mandate to make something outside her usual remit. 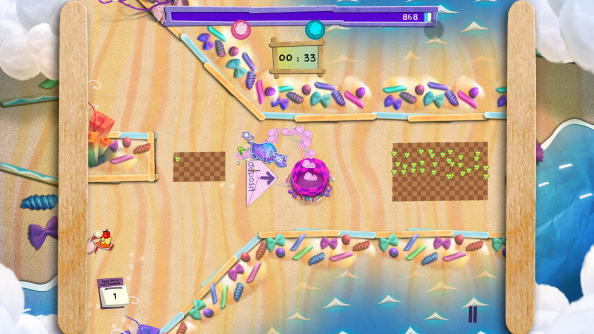 “It sounded like a great experiment and it was a chance for us to rethink what kind of games we make and how we make them,” said chief creative officer Brian Hastings. “It was also a means of examining ways that we can keep getting more efficient as a company.”

The idea Brown settled on was that of a button that made the action stop, rather than go. Four other Insomniac staffers joined her, and built the “school craft art”-inspired action-collecting game available on Steam from April 20th.