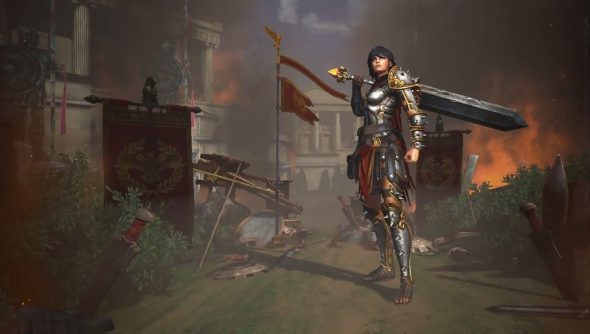 The first new god in Smite’s second season was released today. Bellona, the Roman Goddess of War and sister to Mars seems to be the ultimate soldier, wielding a variety of weapons and fitting into different roles on the battlefield. Targeted attacks, AoEs, healing attacks, protection and damage buffs – she’s got a lot of bases covered.

While Bellona looks at home backing up allies, ganking and pushing up lanes, her main focus is going up against basic attack-focused gods. Her Master of War ability grants her protection and movement buffs while giving and receiving basic attack hits, Shield Bash not only damages and slows enemies, but absorbs and reflects a basic attack, while Scourge damages and disarms enemies, preventing them from making basic attacks.

She’s got three weapon sets: sword and shield, hammer and whatever that crazy chain-sword-mace thing is. These all correspond to different abilities. Using Shield Bash makes her use the sword for basic attacks, while Bludgeon, which makes her spin around with a hammer, allows her to use the hammer instead.

Bellona’s Ultimate is Eagle’s Rally. It’s a targeted AoE buff that causes her to leap to an area and plant a Roman flag which gives her allies protection and a physical damage boost while harming and stunning enemies.