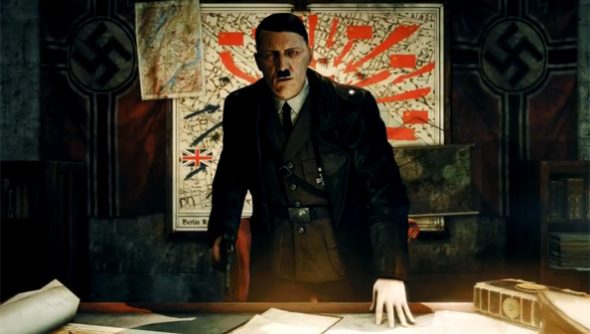 Oh, God. I wouldn’t go into the Fuhrer’s office right now. Seriously, leave it – he looked really angry a minute ago. Like in the speeches, but also wielding a gun. And you know what Hitler says: you wouldn’t like me when I’m angry.

Watch from a safe distance beyond the break.

Apparently, when Hitler’s angry he tears people from their graves and has them fight teams of one to four players in the ruined streets of Berlin. So there’s lots of footage of that in Sniper Elite: Nazi Zombie Army’s launch trailer, and also of that totally disgusting X-Ray hit-cam from V2, which has reportedly won awards. In the Best Skull Fractures category, presumably.

The whole affair’s so gratuitous as to become completely inoffensive, and promises to be Good With Friends. Oh, and there’s a prequel novel! So it’s a bit like Halo. And it’s out today. What do you think?