AMD’s Catalyst Control Center display driver and utility is a bit long in the tooth now. Its original release date, most historians estimate, was some time between the Concordat of Worms in 1122 AD and King John of England’s commissioning of the Magna Carta circa 1215 AD. High time, as AMD evidently concur, for a refresh. Ladies and gentlemen, Radeon Software Crimson Edition is that refresh, and it brings some meaningful changes to Team Red’s hardware and software ecosystem.

It’s been a busy week of announcements for AMD – they also unveiled a new graphics card, the Radeon R9 380X, recently.

Radeon Software Crimson’s elevator pitch comes with four hooks: it loads ten times faster than CCC, adds 12 “new or enhanced” features, offers up to 20% more performance, and up to 1.8 times more power efficiency. For a new driver suite, that sounds like a pretty good deal. All you have to do is sit there, watching a loading bar stroll across your screen while your GPU gets more powerful and less beligerent with your electricity bill.

But is it going to be enough for AMD to claw back some of NVIDIA’s 54% market share on Steam and grow its own 26% slice of the pie? Realistically: no. Not on its own. A new line of GPUs is needed to make a meaningful dent on those figures. What Radeon Software Crimson will do, though, is help smooth the journey.

AMD’s starting point for their new software suite was a list of common complaints with the existing CCC (which actually first launched in 2002, if you really want to trample on my earlier gag). The company fixed the entire top ten on that complaints list, which features incredibly specific game crashes in certain areas, multi-panel display issues, Freesync wobbles et al. These fixes formed the foundation of Crimson. 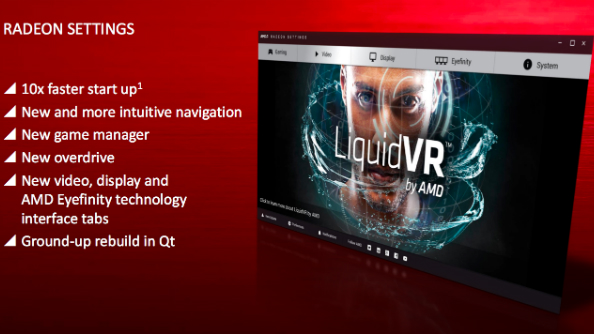 What AMD have arrived at is a more lithe display utility, loading ten times faster and requiring fewer clicks to get what you want our of it. The new game manager is, arguably, a nod to NVIDIA’s own game optimisation suite that offers a one-click visual settings tweak for best performance.

A notable step forward in the field of agility for Crimson is in initialising a new display – CCC was notoriously sluggish with projectors, but in any display configuration AMD now promises initialisation up to threes time faster. Delving into more niche territory, a new ‘Clean Uninstall’ facility completely wipes old display drivers from your system and installs the new, appropriate driver. It’s aimed at people who swap a lot of graphics cards in and out of their systems for reviewing and benchmarking purposes. To this feature, we say – in one voice, sonorous and in perfect unison – thanks, AMD.

AMD’s own VR driver, LiquidVR, is integrated into RSC, allowing developers access to their unique VR API. In particular, Team Red are keen to trumpet the VR advantages of Graphics Core Next (GCN), which allows asynchronous compute/shader tasks and thus smoother, vomit-free VR performance. As has been well-documented, AMD claim NVIDIA’s hardware is incapable of async compute, so it’s important for them to really sell its advantages. 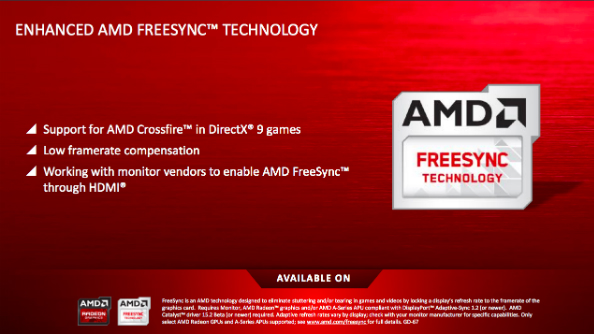 Freesync’s revamp is interesting, too. Not only does it add in Crossfire support for DX9 games, but adds an algorithm to smooth out gameplay when the frame rate dips below the minimum refresh rate. In AMD’s words, the algorithm is “automatically enabled on all AMD FreeSync technology-ready monitors where max refresh is ≥2.5X min. refresh.” The effectiveness of this Low Framerate Compensation (LFC) remains to be assessed, but it’ll help to gain ground on NVIDIA’s G-Sync if it works well.

That’s by no means the extent of RSC’s extensive work under the hood – there’s a new adaptive dynamic contrast setting, improved smoothing for 4K displays and Dynamic Super Resolution support that allows 1080p panels to scale up to 1440p for extra screen space. But what we’re really here for is the gaming performance. And in an admittedly specific set of circumstances, the performance boost is very encouraging.

Running the Fable Legends DirectX 12 benchmark at 1080p with a Radeon Fury X, RSC produces a frame rate 20% higher than the same hardware setup with CCC. It’s significant that both this and Ashes of the Singularity, the other title reporting a big performance boost are DX12 games. It appears RSC is particularly well-optimised for Microsoft’s new API. 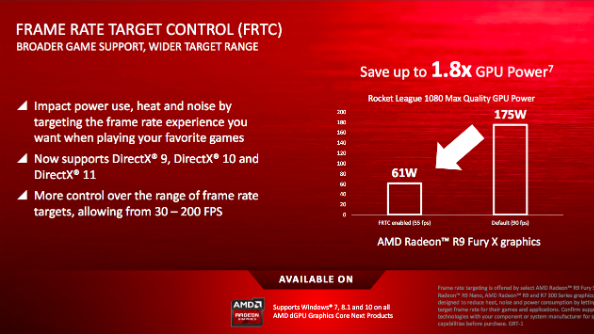 Since you’re dying to hear about power efficiency, I won’t make you wait any longer. The above slide demonstrates the fruits of Frame Rat Target Control, a frame cap utility AMD rolled our earlier this year designed to save on GPU power consumption, heat and noise. You can see the power draw disparity between Rocket League running at 55fps and 90fps, and it’s considerable. With RSC, AMD extends its support to a wider range of games and frame rates, from 30 to 200. It’s a handy tool for minimising coil whine too, as higher power draw to the card tends to make the whine… er, whinier. AMD are also claiming 23% better performance per watt in games.

That’s the surface level of RSC, anyway. Crimson is just the start of Radeon Software’s roadmap, too: Team Red are planning regular updates, each codenamed a different shade of red, in the coming years.

There are tangible benefits to CCC’s overhaul, but there’s also a sense that AMD aren’t telling the full story regarding their plan; that Radeon Software is laying the foundation for more ambitious plans than increased optimisation and efficiency here and there. It may mark the beginning of a more aggressive VR strategy, or an upcoming line of DX12 cards designed to topple NVIDIA’s grip at the $250-$450 price point. Or, indeed, something more akin to the latter company’s ever-expanding GeForce Experience, no longer simply a driver distribution service with bundled utilities but a genuine ecosystem.

We’ll be going hands-on with Radeon Software Crimson in the near future to put AMD’s claims to the test.