Solasta: Crown of the Magister stands stoically at the cross section of several game worlds. From a distance, the isometric RPG dungeon diving evokes old Infinity Engine games like Baldur’s Gate. Combat scenarios play out like an XCOM skirmish with a few more bells and whistles. Character moments and conversations remind me of Dungeons and Dragons, complete with stat checks and dice rolls. And yet, perhaps surprisingly, Solasta feels more like a tactical RPG than a DnD alternative, but is a delightful package nonetheless.

Every grand fantasy adventure starts in a tavern, and Solasta is no different. Your party of loose acquaintances meet under the same auspicious orders, sharing tales of the near death experiences they went through to get to their cups of ale. These characters can either be selected from the prepared roster, or created from scratch.

Cosmetic customisation options are limited compared to the more robust facial and body sliders you see in contemporary RPG games. You’re largely restricted to the same set of faces and hairstyles for everyone, with some race-exclusive features like braided beards for dwarves. Without adding some age to the characters though, their faces seem textureless and alien. It’s not a deal breaker that my half-elf ranger looks a bit like a procedurally generated NPC, but it is disappointing, especially next to the premade high elf wizard, who looks great.

Statistical customisation for characters, however, is wonderfully robust. The six available classes all come from fifth edition DnD, complete with dynamic variables that enable you to build in a little divergence. 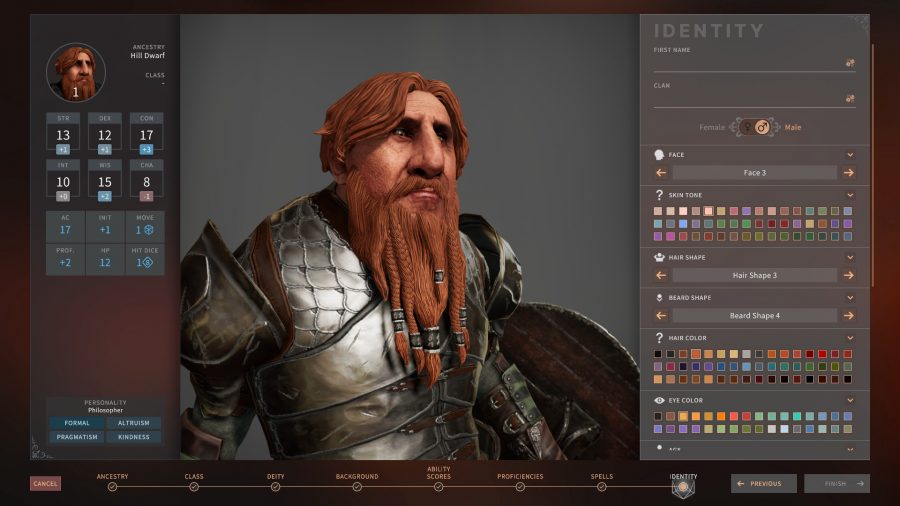 Want a Ranger that can go toe to toe with the best fighter in a brawl? How about a fighter who can cast spells to supplement your physical damage? All are possible, and feel rewarding as you level up.

DnD players will recognise the systems and fall in line, while newcomers shouldn’t find it much of a challenge

You can also assign personalities and backgrounds to characters in your party. The personality options let you drill down into behaviours, tagging them with traits like egoism or pragmatism. These spice up dialogues, but there don’t seem to be any ramifications for having a party with traits all over the alignment spectrum – they can still solve dialogue problems with normal skill checks. Backgrounds are another form of window dressing, mainly serving as triggers for character-specific side quests.

The world of Solasta is a curious one. A great cataclysm destroyed the old world a millennium ago, leaving vast swaths of the land blighted by powerful magic. The few communities that have rebuilt live cautiously, knowing that whatever is in the Badlands will find its way out eventually. Solasta doesn’t do much with this premise, however – many of its settlements are uninspired hubs for shops and quests, with little to make them stand out. 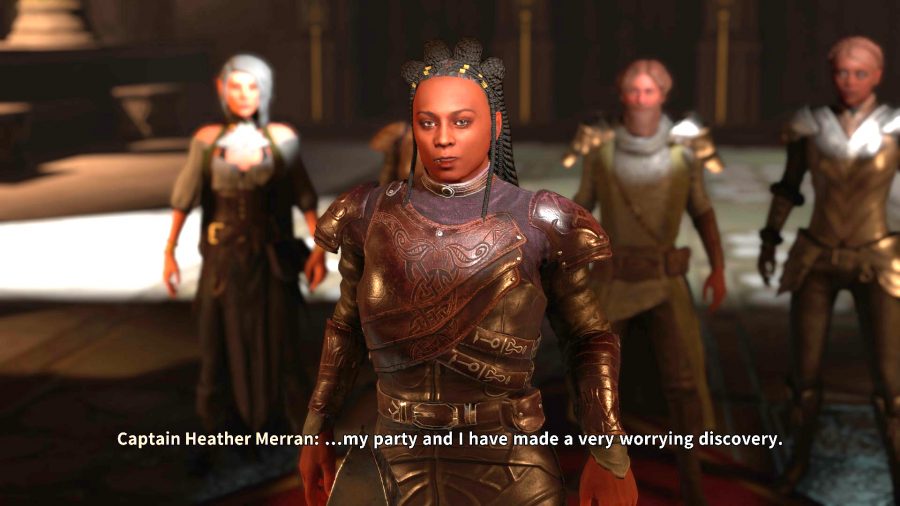 Thankfully the dungeons are a lot more striking, and you can expect to battle through necromancers’ towers tucked away in swamps, or to trudge through thicketed wastelands of lava floes and dark woodland. Even  simple backdrops like cliff faces and waterfalls are used well, and make the land feel rugged and diverse.

Once your adventure gets underway, the 40-hour main story is pretty standard fantasy fare. Your quest has you traveling through both civilised regions and badlands alike in search of the pieces of a great artifact – the titular Crown of the Magister – that could prevent a second cataclysm. Along the way you’ll meet new people and travel to exotic locations, but  almost every branch of this story tree ends in a fight.

That’s not necessarily a problem because the combat in Solasta is very good. Every turn, your characters can move across the grid-based maps and swing a weapon, cast a spell, or use an item. Most classes also get unique actions – the Ranger can mark a target so they do more damage to it. DnD players will recognise this system and fall in line, while newcomers shouldn’t find it much of a challenge. Fifth edition was designed to be simple to understand and execute, and this accessibility is in evidence every time the battle music starts. 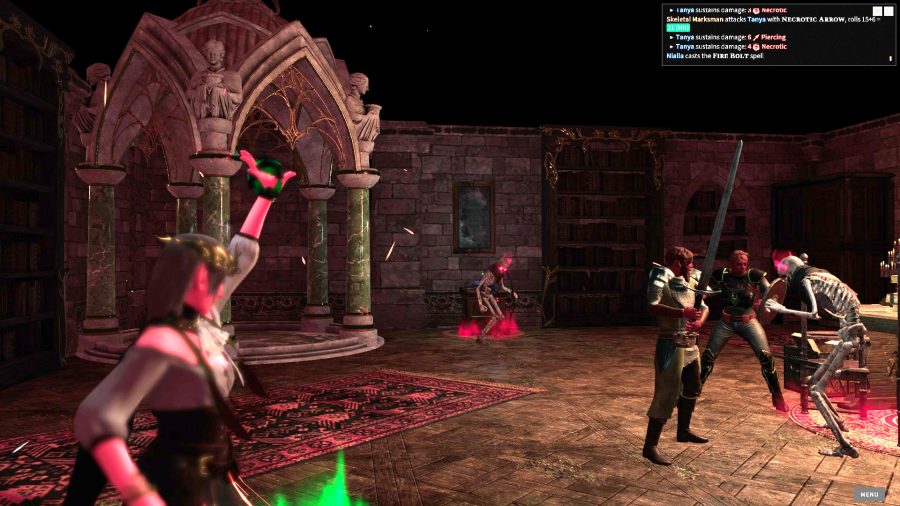 Solasta complicates this with the makeup of its encounters and battle maps. On standard difficulty, enemies are tough and will capitalise on any opportunity you present. They don’t just hit the first person they see – they’ll look for priority targets, like those with low armour or who appear to be buffing or healing other party members. They’ll gang up on isolated characters and knock allies down to make them easier to hit.

If you’re standing next to a sheer drop, they will push you off the ledge. Depending on what you’re up against, they can fly or run up walls, all to get the right angle to defeat you. As you and your enemies get stronger, it becomes more and more important to use all your tricks to gain whatever advantages you can.

Excitingly, you can tweak the difficulty in granular ways. Comfortable with the damage enemies are doing to you, but think they have too much health? Just lower the enemy health multiplier. You can even add a blanket negative or positive modifier to all rolls for enemies and allies – I chose the karmic dice option, which only lets you roll poorly so many times before you automatically get a good roll. This did wonders for my blood pressure in later quests. 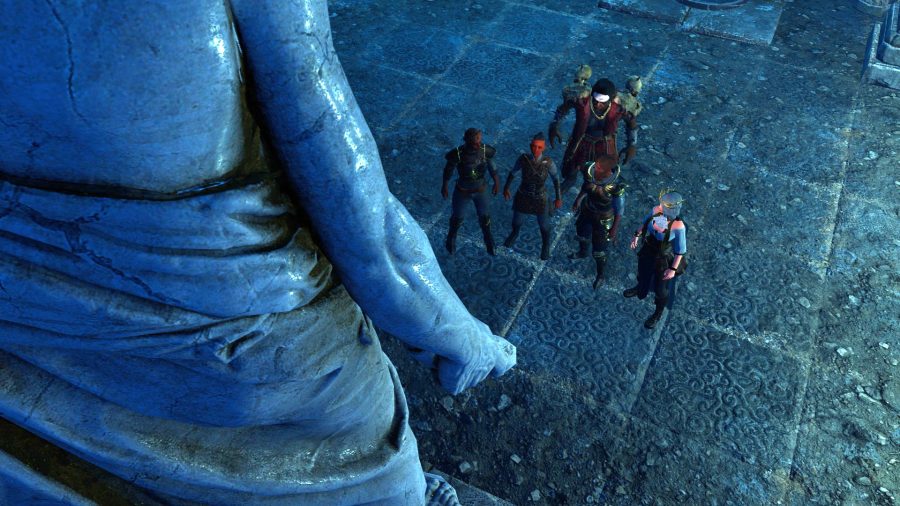 Between battles, you’ll explore environments for loot and clues to advance quests. Characters’ skills, like insight and lockpicking, help a lot in these scenarios, uncovering helpful lore about the ancient ruins you’re plundering, or unlocking navigation options like spelunking or breaking into locked doors. The character with the highest stat will make the rolls, but there’s no way to increase these stats after character creation. So if you have one persuasive person in your party, get ready to rely on them for all your sweet-talking needs.

Sadly, most of the loot you find is rarely more interesting than a piece of gear or a crafting recipe, and after a while, the risk of getting attacked while straying too far off the beaten path outweighs the reward of a new bauble.

I tried a few early-game scenarios with a variety of party compositions to see how necessary certain specialisations are to getting varied outcomes. Would my party still be able to identify the statue of an old wizard without a magic user present? Turns out they’d give it a shot, but be far less likely to succeed. I like the importance of party comp for making the most out of these scenarios, but I wish there was a reliable or creative way to fill in these exploratory gaps as you go along. 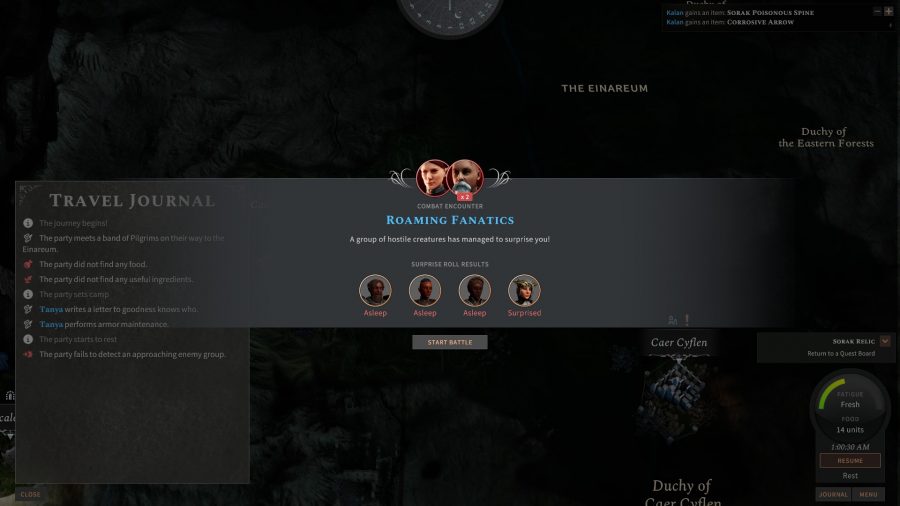 Between quests, you hop back to the hub city of Caer Ceflyn to restock on items and touch base with the various factions looking to buy whatever oddities you find out in the wild. This works like any faction system – the more you sell to one group, the more they like you, and thus you gain access to more of their inventory.

The quirky Scavengers are my favourite. Instead of buying curios from my party, they would go into dungeons and encounters after I leave, take all the trash loot I didn’t want or have space for, and give me a cut of what they earned after processing it all. Anything that removes the incentive to fill my bags with trash just to make some extra money, which is all to common in RPGs, is a good change in my book.

Solasta’s storytelling is hit and miss. The overall plot is serviceable at best, but occasionally you’ll run into a character or situation that makes the next hour or so truly memorable. There’s a great early dungeon where you meet several different characters who all live in the same fortress and serve the same master, but hate each other. Probing for an introduction to their master without stepping on too many toes or getting involved in their drama was a surprise delight. 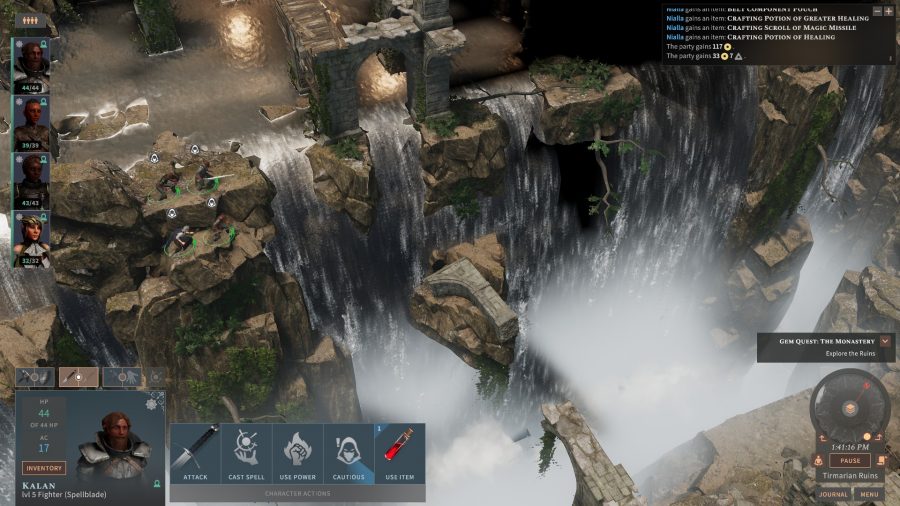 But just as often there are simple fetch quests given by boring NPCs, which lead to repetitive encounters. Other times, an interesting quest can get hobbled by your own decisions. During the mid-game stretch, I was given a task to unite several clans of orcs against one emerging tyrant. This means I have to help each clan leader with a task, with the promise of their allegiance when I complete it.

Solasta feels more like a tactical RPG versus a DnD alternative, but is outstanding nonetheless

I find a shortcut that lets me try to kill the tyrant without uniting the clans, and to my shock it works! But the story doesn’t seem to accommodate that ending at all. Not only does the orc companion who’s promised to help fight the tyrant just disappear without any trace or acknowledgement from the party, but they suddenly treat our new friends like completely disposable fodder in a way that wasn’t consistent with the hours we’d just spent talking to these people and learning their ways.

The automated, trait-based dialogue also occasionally steps over decent plot points. When there are multiple questions you can ask a subject, your characters will sometimes patch in responses to the wrong questions. I’ve seen them start one line of conversation, immediately switch to another, and then go back to the first, which can turn an emotional scene into a jarring one. It’s a cool idea, but the execution of this procedurally generated personality system is rocky. 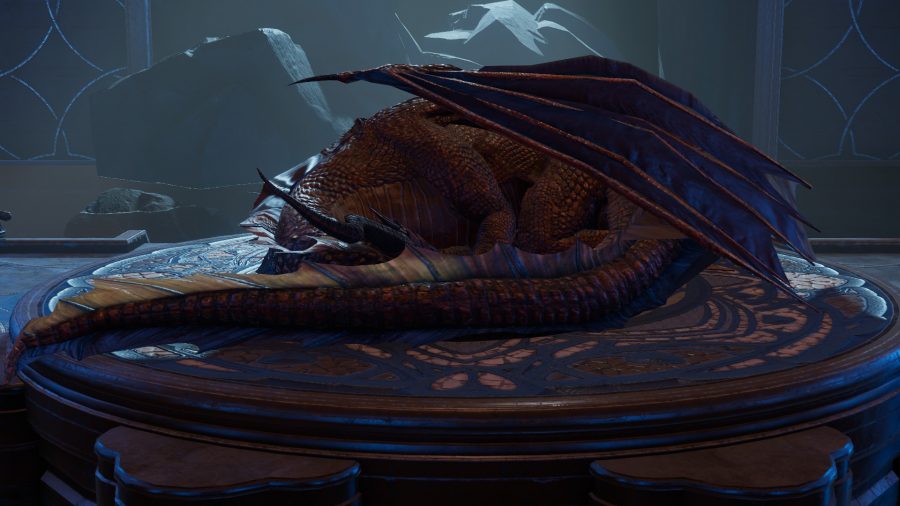 Bugs also persist throughout Solasta. Dice rolls will sometimes not appear on screen, but a running log in the top right corner keeps track of all that as a backup. Combat AI sometimes breaks, making monsters meander in circles as they figure out what to do. And instead of crafting one magical breastplate that was supposed to take 12 in-game hours to complete, I ended up crafting one magical breastplate every hour for 12 hours. Silly and frustrating, but not game breaking.

It isn’t the final, polished product I hoped for, but Solasta: Crown of the Magister is a distinctive entry in the tactical RPG space. Though most of the the story and dialogue covers well-trodden territory, the combat is challenging and rewarding – even when it feels like the dice have a vendetta against you.

Solasta: Crown of the Magister review

Solasta’s tactical battles shine brightly, even in the shadow of a drab and by-the-numbers fantasy story.