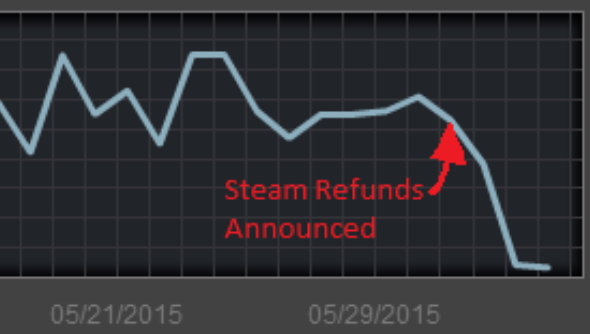 Last week Valve finally decided to give buyers a little more power by allowing anyone to claim a refund on games within 14 days of purchase, provided you’ve played for no more than two hours. Whilst this is no doubt a great move for buyers, some developers are already struggling with the repercussions of such a system.

No need for a refund with our guide to free Steam games.

Qwiboo is the developer behind Beyond Gravity, a small indie game on Steam. The game’s main story is bite-sized, and can be finished in around an hour. It’s priced accordingly, too, at £1.59. But since Steam’s refund policy was introduced, it seems like players are taking advantage of the two-hour limit to play the game for free.

“Out of 18 sales 13 refunded in just last 3 days. That’s 72% of purchases. Rate of refunds before was minimal,” said the developer on Twitter. https://twitter.com/qwiboo

Puppygames, developer of Revenge of the Titans, has seen a massive spike in players asking for money back since the policy went live. “55% refund rate on RoTT alone. Versus 5 refunds in 10 years direct,” the developer tweeted.

Puppygames also tweeted a graph (which can be seen in the header image) showing sales before and after the refund policy, and it’s a pretty damning story.

Also coming forward with a similar story is RPG Tycoon developer Skatanic Studios, run solo by Matt Gambell. “Over the entirety of the 31 days of May, RPG Tycoon was refunded ONCE. In these first 7 days of June out of the 60 average units sold, over 20 of those have claimed a refund,” said Gambell on the Skatanic blog.

Gambell is pro the refund policy, but has issue with the fact there’s no information on why a customer wishes a refund. “One user purchased the game 7 times and then refunded 5 of them. (Did they buy 6 copies for friends, only to find that 5 of them already had it?),” he explained. “I have so many questions… Could it be that they were having technical issues? Is it something that could have been solved by talking to me? Did they ACTUALLY mistakenly buy 7 copies of the same game, is that even possible?”

With the situation like it is, Gambell worries this will push indies who were traditionally anti-DRM into a position where they feel like DRM is the only way to protect themselves. “Now I kind of want to add DRM to the game so that you can’t play it because you’ve actively revoked your rights to it… but doing that is against everything I believe in and is totally unfair for those that have paid for it and have paid for it to be DRM free,” he said.

It’s a position Cliff Harris of Positech Games is worried about, too.

If there’s anything we can agree on, it’s that DRM is a bad thing and none of us want it.

While there’s no question that the refund policy is good for consumers, do you think Valve need to re-think the developer-end of the policy? Or should studios just accept that this is the best solution?