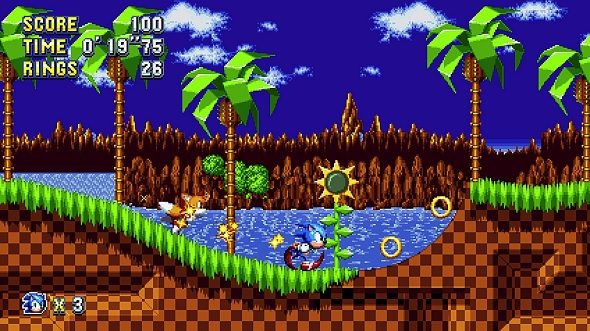 Sonic Mania starts spectacularly. There’s the titular hedgehog himself, popping up on the title screen, waggling his finger at you in the way you remember, his face contorted into an expression that’s half-smile, half-smirk. “Kept you waiting, huh?” Such attitude.

Then comes an animated sequence, reminiscent of the one that opened Sonic CD so fantastically. And, boy, you can’t wait to dive into what’s been, for so long, billed as The Big Comeback Proper, the Sonic game that finally reconnects Sega’s mascot with the 16-bit classics that made him.

We’ve finally played Sonic Mania so now the question is how will Sonic Forces hold up?

Initially, Mania is a wonder, a dizzying rush of inspirational memories intersecting modern design ingenuity. Sonic comes shooting into the frame from stage left, riding the wings of Tails’s biplane. Some series-standard nefarious Robotnik nonsense goes down, aided by an array of robo-baddies, and suddenly we’re back in Green Hill Zone, the place where all of this began back in 1991.

The trees look the same, so too does the lusciously green grass, chequerboard surfaces, and speed-boosting vertical loops. The music is familiar, but certainly not identical to the original’s rather-less-snazzy sounds. And this is just the first of Mania’s eight remixed zones, each one split into two acts – it’s hard not to fall in love with it at first spin. 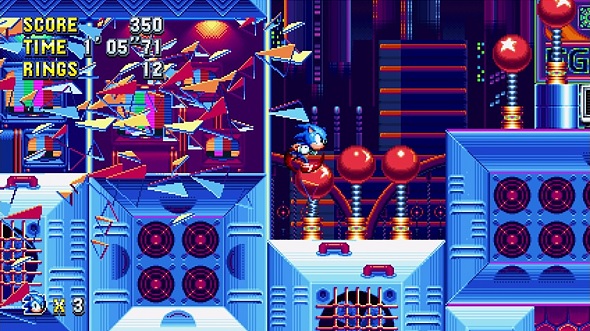 Studiopolis Zone is the first completely fresh material Mania chooses to show off; a proof-of-concept design of bright ideas mixed with series-faithful features. There are all manner of springs and loops, as you’d expect, but also TV vans to be beamed from, popcorn makers to be bounced around in, Wheel Of Fortune-like letter tiles to flip over to form in-joke messages from Sonic’s past, and a bingo machine to drop points-scoring balls from.

Studiopolis is an extravaganza of innovation, packed to bursting point with easter eggs – and the musicis a true joy, especially for those of us who hold Sonic CD’s tunes up as the series’ best.

Meanwhile, another wholly new level, Press Garden Zone, is a smart maze of print presses (producing Robotnik propaganda) set within both a snowy forest and inside an old, crumbling castle. There are freezing snow-blowers to contend with, which work differently to those seen in Sonic 3, while the production-line conveyor belts are used to spring our heroic avatars to new heights.

Mania’s levels are massive, with multiple routes available through each, Sonic often needing to double back on himself several times to wiggle through the various dangers and obstacles. You might say this is a good thing, that it encourages repeat play – and the Special Stage-accessing rings, which take you to a Sonic CD-indebted UFO chase to win a Chaos Emerald, are usually well hidden enough to need to be found, rather than simply stumbled across. 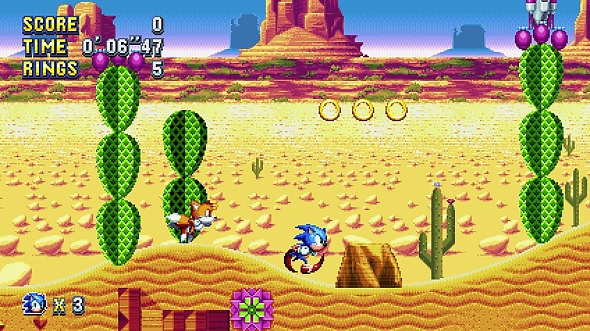 You might alternatively argue that the design philosophy that led the first Sonic game – speedy momentum, platform-transitioning fluidity, and satisfying flow, with the emphasis on (as Sega’s advertising so famously declared)what Nintendo couldn’t deliver with its Mario games – has been forgotten in Mania’s genesis.

Of course, series stalwarts might point to Sonic 2 as the party responsible for messing with that suitably-hued blueprint, those 25 years ago. They might quip that Mania is simply another part of the gotta-go-fast (but only at your own risk) tradition, where fast-paced progress can only properly be achieved after fully learning any given level.

Nevertheless, bombing onward at top speed in Mania, without having an act mapped in your mind’s eye already, is usually a sure-fire way to spill rings – or worse. And played slower, with emphasis more on exploration than acceleration, Sonic becomes Just Another Platformer – and one where a strict ten-minutes-per-act time limit prevents you from poking around in every corner in a single session.

Letting that clock tick on, past three minutes, four, and more, before reaching an act two boss can spell disaster – even if you’re adept at not actually taking damage. Boss fights in 2D Sonic games past haven’t consistently impressed, but Mania’s gone the extra Miles by including some of the very worst the series has ever seen. They are damaging to the extent that you may be tempted to put this game down forever. 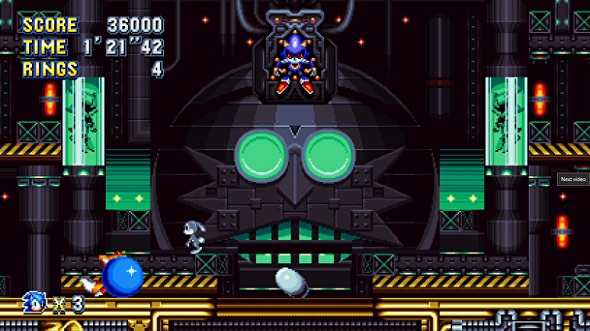 What starts as a straightforward, left-to-right sprint versus the mechanical clone leads to a single-screen fight where Sonic has to use mini Silver Sonics to batter Metal Sonic into submission. How to do this, however, isn’t telegraphed in any clear fashion, and so you spin attack the diminutive robots, popping tens of them, until it clicks. ‘Right, so I hit them when they’re spinning, and thenthey ping around the room. And if I get my angles just right, they crash into Metal Sonic. Got it…’ eventually.

Crack that, and then comes a second sprint, this time chased by catch-up-quick spikes; attack the dashing Metal Sonic enough times while avoiding a skewering, and it’s onto the next stage. Now, I’m not looking for a hand-holding option here, with some sort of obvious prompt to figure out the hows and whats of each boss encounter. But once you understand a boss encounter, you really shouldn’t then be forced to struggle against poorly-implemented and fiddly mechanics.

2) The spider-like boss at the end of Mania’s fourth stage, Flying Battery Zone 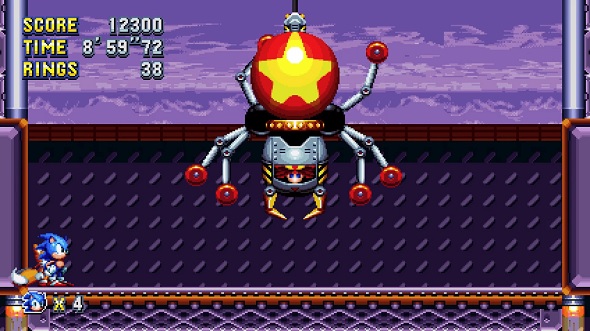 This dangling enemy doesn’t put up much of a fight, its attacks limited to pathetic little projectiles that spit out like wet farts against a strong wind. What does irritate to the point of enragement, however, is how you do away with it.

Sonic must spin around on poles and let go at just the right moment, using his weight to knock the spider – manned by Robotnik – into a wall of spikes. Mistime it, and Sonic will either slam into those spikes himself, or simply fly across the screen before having to repeat the action on the next pole. You’re going to mistime it a lot.

I worked out what I had to do inside a couple of seconds, but the exacting timing required to successfully hit Robotnik’s contraption meant it took a handful of attempts to pass. I actually ran out of time at one point due to combination of pernickety set-piece and minutes spent navigating the preceding level. 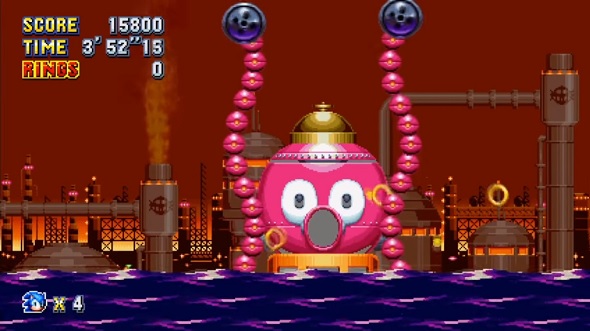 The level itself is a smoke-filled gauntlet of cheaply placed enemies – arsehole octopuses and dickhead seahorses just waiting to disrupt Sonic’s progression – and flammable surfaces that are fine when you’re surrounded by a fire shield, but less so when your unprotected spines are more susceptible to a toasting. But this is tame compared to the nightmarish boss that follows. It takes the trial and error of past bosses to new lows, where every test is met by pain, suffering, sweat-soaked controllers, and quite possibly an exasperated rage-quit.

If you ever played Oil Ocean Zone in Sonic 2, this fight is a little like that, only stupendously more difficult. Not challenging in the sense that it’s particularly clever – it’s not a case of Robotnik having learned from his mistakes and coming back with a tougher submersible shell to crack. It’s just… awful.

There’s a sea of oil beneath the few scant platforms you’re given to jump between. But they’re pulled under the viscous liquid every so often, leaving you flailing about trying to get back to safety. You’ll fall into the oil a lot as a result, leaving your mobility fatally compromised as laser blasts and claw-tipped limbs are aimed your way.

There’s a checkpoint mere seconds before the boss, which you might see as a mercy: but this is a 16-bit experience to the core, and absolutely a case of three lives and you’re out. You can’t continue from the conveniently boss-adjacent checkpoint after that, you have to restart from the beginning of act one. No. Not in 2017. It’s enough to turn off the game for good.

The forthcoming SNES Mini, to use the unofficial name that we’re all going with, allows the player to suspend any of its 21 games, and resume from there later. It has a rewind function, too, to allow for immediate third, fourth, and more attempts. Sonic Mania desperately needs something like that.

Make no mistake: the Oil Ocean boss is an astonishingly cheap addition to a series-spanning rogues gallery of lives-sapping stage enders. But to be able to snap back to just before it, without replaying the preceding ten minutes of cloud-obscured leaps of faith, would provide vital balm for the burn it leaves, repeatedly. Perhaps it’s something to patch in, in the future. 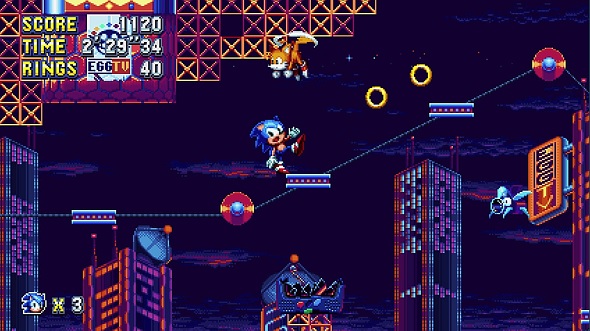 Well, y’know what, Sonic Mania? You’re adorable, when you want to be, and I can absolutely see why so many critics fell for you. But perhaps they got lucky and avoided too much Oil Ocean anguish; perhaps their muscle memory is perfectly intact from the 16-bit days; or perhaps they never lived through them to have the context for just how painfully bad some of your boss fights are. Perhaps they wanted to believe that you’re better than you are, so much so that they bought into their own nostalgia-driven deceit.

I’m done buying into it, though. When you sing, Sonic Mania, your song is an evergreen delight, and one given sparkling new zest with a clutch of genuinely appealing updates. But when you’re being reprehensible, spiking your difficulty through poor design rather than steadily increased odds – which is sadly more often than many who eagerly anticipated this game should be comfortable with – you can go soak your head in oil.