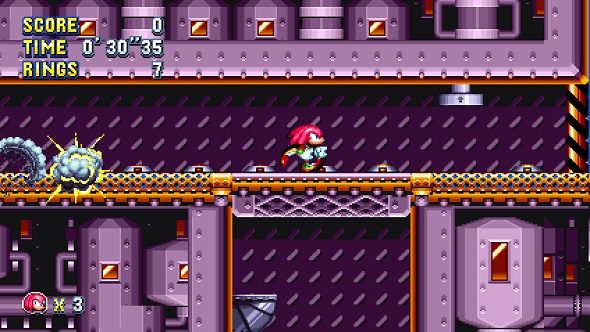 Sega have released a brand new trailer for Sonic Mania, this time showing Knuckles getting down to business. Set in the Flying Battery Zone from Sonic and Knuckles, this footage shows off the echidna’s slower-paced platforming, offering a welcome change to the blinding speed of Sonic.

Check what PC games are on the horizon with our list of upcoming games.

While Sonic relies on always going fast and Tails is all about precision platforming with his propeller jump, Knuckles is focused on short bursts of speed in between climbing and gliding sections. Just in the footage, we see a brief gliding section on the outside of the airship transition into a slower vertical climb, as Knuckles goes deeper into Eggman’s flying base. As such, expect levels with the red echidna to require a little less speed than his hedgehog and fox compatriots. On the plus side, there will probably be a bit more punching involved.

As for the level itself, it makes up one of the classic Sonic levels that will be returning in Sonic Mania. So far, Green Hill Zone and Flying Battery Zone are the only confirmed retro levels, with the rest of Sonic Mania being a mix of brand new zones and those created from scrapped concepts from previous Sonic games.

A solid release date has yet to be confirmed for Sonic Mania, but expect more news to emerge from this year’s E3. With Sonic Forces also scheduled to release by the end of this year, 2017 is looking like the time to be a Sonic fan.