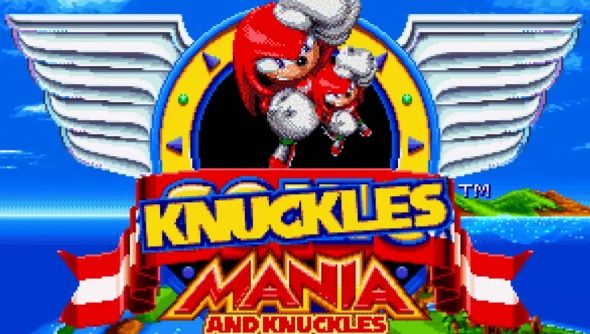 I’ve got some good news, and some bad news. The good news is that the DRM-related launch problems with Sonic Mania have been resolved, and everyone seems to be enjoying the game now. It’s really rather lovely. The bad news is that, thanks to the PC version being moddable, everything – and I do mean EVERYTHING – is Knuckles now. Oh no.

Inspired by an old Sonic community meme which Mania itself pays tribute to, Knuckles Mania and Knuckles is… Knuckles. While still work-in-progress, a disturbing number of sprites have been turned into Knuckles clones of various shapes and sizes. Even enemies and bosses have been warped to fit in with the more Knuckles’y aesthetic, and the music is… Well, it’s really quite something, and slightly NSFW as it goes increasingly far off the rails. You have been warned.

It really should come as no surprise that the result of the game’s moddability has been a rapid descent into Dada-esque lunacy. After all, Mania’s own adorable opening animation was brought to us by the creator of Nipples the Enchilada– Sonic fans are a strange breed. Still, the amount of effort poured into this ridiculous joke is impressive, and they’ve even gone as far as converting the 3D stages (wherein you hunt for Chaos Emeralds) into a festival of mauve echidnas.

While this unholy mountain of Knuckles is the tip of the iceberg, Sonic fans are swarming over Mania as we speak. There’s a whole Reddit community dedicated to modding the game, and while most so far are just aesthetic tweaks and sprite replacements (expect memes), there are already some small gameplay tweaks with more undoubtedly to come. Sonic Mania on PC surely has a long, bright and very weird future ahead of it.