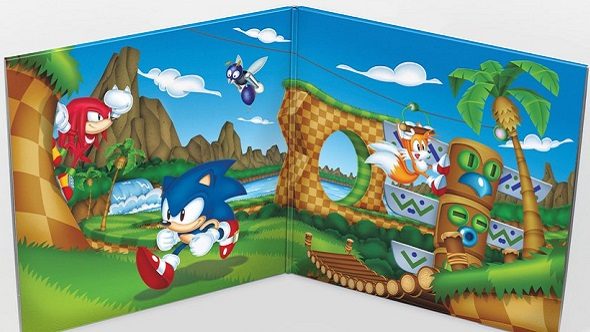 With Sonic having just turned 26 and a new game on the horizon, Sega have teamed up with Data Discs to commemorate both occasions. Coming in time for its launch on August 15, hedgehog aficionados can celebrate the release of Sonic Mania with a special two-disc vinyl album.

Scout the PC gaming horizon with our list of upcoming PC games.

The album will feature select tracks from Sonic Mania along with exclusive artwork only available on the album cover. Along with the two discs, fans of the blue blur will receive a special sleeve showing Sonic, Tails, and Knuckles, as well as a download code for the album.

Pre-orders for the album will go up in mid-July, with it costing £19.99. With previous Data Disc albums selling out in the blink of an eye, you’ll have to be as fast as Sonic if you want to snag this soundtrack. It will be available in your standard vinyl black, as well as translucent blue so it looks like Sonic is actually spinning around on your turntable.

Data Discs have also announced that there will be a Limited Edition soundtrack as well, but haven’t yet revealed what will feature in this version. Based on previous Limited Edition vinyl albums for games like The Witcher 3, it will probably feature a special third disc. Seeing as Sonic, Tails, and Knuckles feature in the promotional art for Sonic Mania, I wouldn’t be surprised if the three discs of this Limited Edition are coloured blue, orange, and red.

Sonic Mania releases August 15 on PC, with it currently going for 10% off on Steam if you pre-order before its launch.