Brad Wardell describes Sorcerer King simply: “You’re Gondor, and Sauron has the Ring. He got Frodo.”

It’s an interesting place to start a fantasy 4X: you’ve already lost the familiar contest for supremacy. Another faction triggered the endgame and relegated everyone else to an historical footnote. That ruler has become the Sorcerer King.

Meanwhile, you’re the last holdout, trying to mount a resistance with just one city against an empire. To borrow another phrase from Wardell, it’s The Alamo as a 4X strategy game.

“We kind of wanted to flip the whole concept [of the fantasy 4X] on its head.,” Wardell says. “Where the AI player is the one really playing the 4X game, per se, but he’s playing a very different one.”

In keeping with Sorcerer King’s theme of being an “epilogue” to an unseen fantasy 4X, diplomacy is not about competition between factions. Everyone is simply reacting to the fact that the Sorcerer King is now the dominant power.

“The other factions aren’t even playing the same game as you. They already got wiped out. They’re just remnants of their former selves,” Wardell says. “You’re trying to have conversations and do favors for them, so that they will lend you a hand in defeating the Sorcerer King. But the Sorcerer King is trying to woo them onto his side.”

The Doomsday Counter, right at the top of your interface, provides all the context you need for these interactions. It slowly fills as the Sorcerer King makes progress towards the “spell of making”. As he destroys magical shards that are scattered around the landscape, or lures AI factions onto his side, the bar fills up.

The Sorcerer King is also eager to extend a hand of friendship to you, and there’s actually some incentives to do business with him. He can offer you shortcuts to powerful spells, in exchange for your help speeding up the Doomsday Counter. In the early game, when his victory seems to be in the far distance, it’s a surprisingly tempting option.

After Enchantresses and Heroes

Sorcerer King doesn’t call too much attention to its origins in the Elemental series of fantasy 4X games. Its art style is more like a children’s storybook compared to Fallen Enchantress’s D&D Monster Manual-style artwork. But it is a familiar world to fans of the series, and a lot of the flavor text and quests point back at the earlier series.

But Sorcerer King is a much simpler game, in part because you do have less to worry about than in a typical 4X. Cities need food to grow, and they can only grow to a certain point before they’ve reached their potential, which imposes a nice, straightforward trade-off: do you specialize a city and drill down into a few very advanced types of units, or do you take a broad-but-shallow approach? 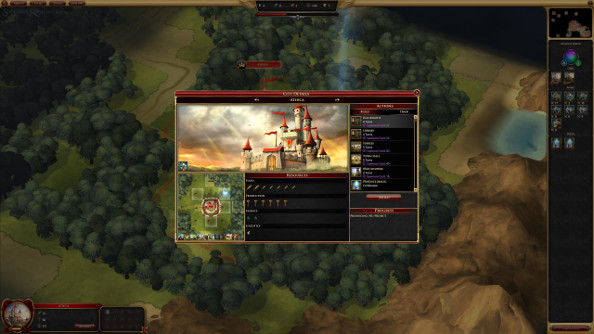 That’s about as complex as governing gets, because the main action is about taking small armies onto the map and trying to accomplish a number of contradictory goals.

On the one hand, the Sorcerer King is running around the map trying to knock out shards to advance the Doomsday Counter. You get a ping to the location each time an attack is underway, so that you can send an army to go join the defense.

Problem is, there are a lot of enemy camps and roving monsters between you and the shards. Just getting to the shard is a battle in itself. And in the meantime, you also need to be carving out your own places for expansion and locating undefended shards.

On top of that, the Sorcerer King is also powering-up his war machine.

“The Sorcerer King is building strongholds around the map. And the more strongholds he has, the faster he is able to get nastier units,” Wardell explains. “And the more shards he destroys, the faster the doomsday counter is going to go up. And the more powerful the magical spells that he has access to. So you as a player, to prevent getting gut-punched, you will need to be actively going out [and fighting back].”

It could easily be too much to handle, but Wardell is hoping to make it similar to Left 4 Dead in terms of pacing and auto-adjustment of difficulty. There are two systems driving the action. The first is the Sorcerer King AI, and the second is something akin to the “director” in L4D.

“The Sorcerer King is a very complex AI. He’s doing a lot stuff under the covers to accomplish his goals,” Wardell says. “Different parts of the game, he’s doing different things. And also, underneath the covers, is essentially a game manager that ensures every game is different. So when I go on a quest, and I run into these options, that’s based on all these conditions that are in the world.”

The Doom of Men

Sorcerer King is on Early Access right now, but there is one huge feature that has yet to be enabled: other factions.

Ideally, you’ll be slowly cobbling together an alliance of NPC factions who can give you access to special units to help fight the Sorcerer King. On the other hand, some of those factions will have their own rivalries and you’ll have to choose who to alienate and drive into the waiting arms of the Sorcerer King. Once they turn on you, those same special units you needed will be sent against your armies.

But the current build doesn’t have that feature. Instead, it’s a relatively straightforward race to get your armies out and establish expansions so that you can clear away monsters and packs of brigands, and defend the shards from the Sorcerer King. Your cities are mostly for producing armies and generating magic, so the focus is on questing around the map. 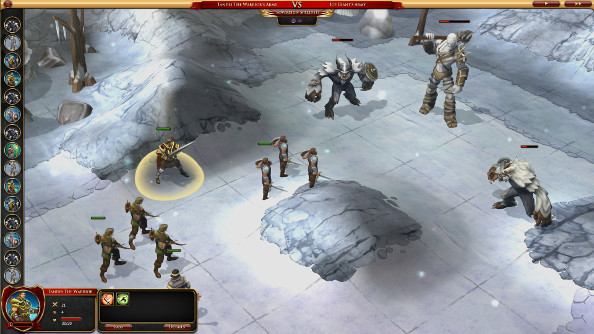 I’m ambivalent about this. On the one hand, I like the tension between my various missions. If I’m fighting to clear a spot for expansion, I’m not defending the shards. If I’m marching to a shard, it’s a huge undertaking that requires almost all my available units (and plenty of reinforcements coming from my cities). The Doomsday Counter is an ever-present menace, demanding my attention even as I need to step-up my expansion in order to fight more effectively. Long-term and near-term goals conflict in some interesting ways in Sorcerer King.

The problem is that, in the current build of the game, most of the game comes down to tactical combat, and that’s where some familiar problems from the Elemental series begin to resurface.

Tactical combat is a little too snowball-y and volatile: most battles are incredibly lopsided, and the penalties for getting overmatched are so severe that I quickly stopped taking risks altogether.

Part of the issue is that an army can look fairly innocuous and, on paper, will look like an even match for yours. But what Sorcerer King (and all the Elemental-derived games before it) can’t really tell you is whether or not there’s a 400-lb gorilla in play. You see that your two armies have similar “combat ratings” before the battle, but then you discover that they’re led by an enemy mage who is one-shotting all your forces. Your combat strength evaporates in the opening turns while the enemy’s power is concentrated in one unit.

That’s especially bad because losing heroes in Sorcerer King seems even worse than in Fallen Enchantress. When I lost two of my major characters in a skirmish gone-wrong, I was left with no clear options for producing another. And those heroes, with their special abilities and potential for growth, are critical for fielding strong armies.

This feels particularly punishing here because you have so few resources to work with. Rebuilding an army or crafting fresh equipment to replace stuff you lost in a battle is a lot harder when the entire game is about scavenging and making the most out of a handful of cities.

On the other hand, some of the major strategic aspects of Sorcerer King are presently missing from the game, so it’s no wonder that it starts to feel a bit like a slog through endless combat. 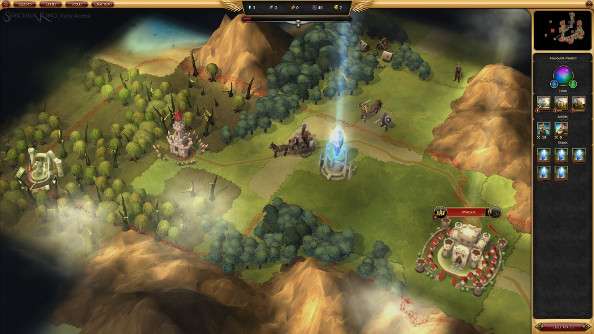 Once in a lifetime

Wardell anticipates this game will be finished sometime before GDC, early next spring or late in the winter. It’s really his baby, a side-project he’s undertaken with some input from designers Derek Paxton and Soren Johnson.

I asked him why he was making this game right now, when Stardock already has an ambitious publishing slate and Wardell himself is busy with the Galactic Civilizations III project. Wardell pointed out that he saw a rare opportunity to do something different, and has no idea when it will come again.

“It’s kind of the first time in many years, or possibly ever, in the 4X genre where we’ve had enough fantasy 4X games being released that there’s a collective understanding of how these games work,” Wardell said. “We’re not having to walk people through the basic mechanics of a 4X. And that opportunity may not come again, at least in my career.”

It’s true. This has turned into an unexpected golden age for 4X games and fantasy 4X games in particular, with Warlock 2 and the outstanding Endless Legend both having come out this year, and the last Fallen Enchantress game being only a year old. It’s a perfect time for someone to offer a twist on a formula that’s suddenly very familiar.